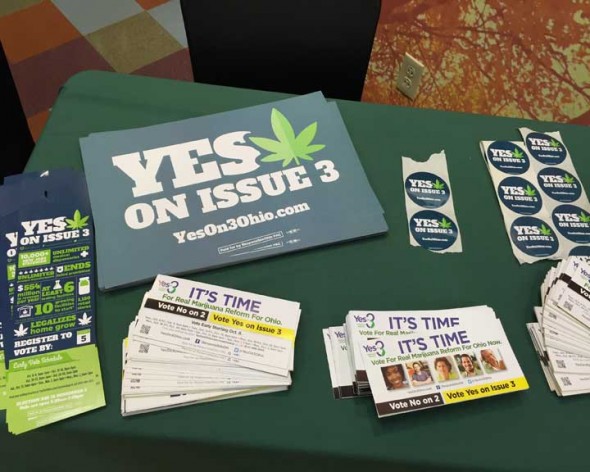 Yellow Springs’ own homegrown forum on Ohio’s two ballot issues addressing the legalization of marijuana stirred strong emotion and several outbursts from a large audience on Thursday, Oct. 15. An estimated 150 participants came to Antioch University Midwest to engage in the debate and challenge the two partisan presenters, Brice Keller of Responsible Ohio for marijuana legalization (Issue 3), and Chris Kershner, of the Dayton Area Chamber of Commerce, against the marijuana issue and for Ohio’s anti-monopoly amendment (Issue 2).

In statements throughout the debate, Keller explained that because the state legislature “has no interest in legalizing marijuana,” Responsible Ohio needed a citizen-initiated measure to get its long-term interest in legalizing marijuana approved. Ballot initiatives require capital to collect the requisite number of signatures, in this case, over 800,000 signatures, only 300,000 of which were considered valid. The capital (about $2 million) came from the 10 predetermined growers and investors who will, according to Issue 3, be the sole cultivators and sellers of marijuana in the state.

However, according to Kershner, not only could marijuana cultivation and sale be hard to uncontrol and possibly harmful, the proposal of 10 grower/sellers would create an unconstitutional and unfair monopoly that Issue 2 attempts to prevent.

“The Constitution can’t be bought,” he said.

The full forum report will appear in the Oct. 22 issue of the YS News.