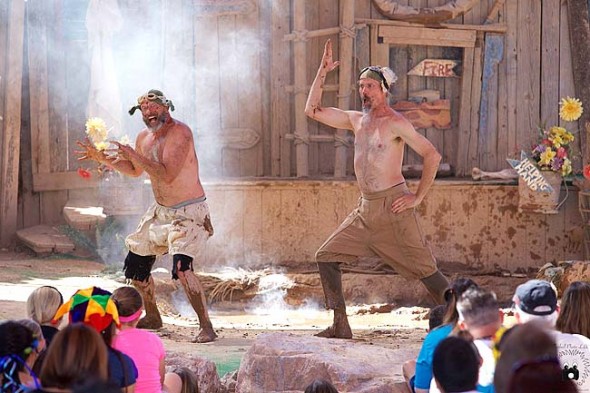 Actors Jonathan Crocker and Douglas Mumaw, best known in this area for their Theatre in the Mudde at the Ohio Renaissance Festival, will perform a lesser known show next week at the Antioch College Amphitheatre. On Wednesday, Oct. 7, they present “Meet the Wyld Man!,” at 12:30 and 7 p.m. with percussionist Jimi Torrey. (Submitted photo by Furball Studios)

Oddball theater in the ‘wyld’

Many villagers have come to know thespians Jonathan Crocker and Douglas Mumaw over the past two decades, either through their temporary residence in town each fall, or by their alter-egos at the Ohio Renaissance Festival in Harveysburg. Crocker started the regional festival’s Theatre in the Ground Mudde Show, where he plays Jake the Wild Man, and Mumaw is a founding member of The Swordsmen, portraying Dirk Perfect. They call Yellow Springs home during the annual festival’s six-week run, Labor Day weekend to mid-October.

Few locals may know, however, that in the past 20 years, the two friends also have established alternative identities at the Arizona Renaissance Festival as The Wyld Men, aka Dr. Cranius Lunch (Crocker) and Seth Sethstherton (Mumaw).

Long overdue local introductions will be made Wednesday, Oct. 7, when Crocker and Mumaw bring their show, Meet the Wyld Man!, to the Antioch College Amphitheatre for two performances, at 12:30 and 7 p.m. Rounding out the production is percussionist Jimi Torrey, a member of the former Minstrels of Mayhem, which was a longtime mainstay on the Renaissance fair circuit. Torrey joined the The Wyld Men full time in 2008.

The collaboration combines the performers’ varied creative experiences with a sense of experimentation and fun, Crocker and Mumaw said recently during a conversation on the Amphitheatre grounds. The show brings together “three different things that create something bigger than themselves,” Mumaw said.

But that which makes the show unique also makes it hard to summarize, at least succinctly, they said.

Basically, the show’s “mission” is “to create the theatrical conditions necessary to go back in time to ‘Meet the Wyld Man!’” But a leap in time has already been made, in that the narrative begins in the Renaissance period, where the characters live. “It’s conceived as a theatrical adventure,” Crocker said.

Crocker’s Dr. Lunch is an eccentric odd-ball, while Mumaw’s Sethstherton is his cheerfully nutty sidekick. “He’s the madcap intellectual,” Mumaw said of Crocker’s character. “We’re doing a super genius and his foolish assistant,” he said. “Or the other way around,” Crocker added.

The actors describe the show’s style as like “a live cartoon.” Fast-paced and full of high-energy high-jinks, its live percussive score features a host of wacky sound effects, they said. “The show always had a cartoony nature because we overact so broadly,” Crocker added.

And there’s mud.
“The set depicts the jumbled ruins of an ill-fated ancient stone circle,” according to the production’s official description. “The massive rocks of the henge have collapsed into the aquifer below, causing a marshy pool to form in their midst.”
In Arizona, the show has a dedicated space and permanent set. Re-imagining it in a temporary location took some creativity, but the actors are excited about presenting the show here. “The Amphitheatre is a perfect engine,” Mumaw said. While the show’s home is a Renaissance Festival, it is a theatrical production, “so it seemed to us a pretty normal transition to do it in a real theater,” he added.

The proceedings are appropriate for all ages, and audience participation also plays a part. “We give a couple people the opportunity to become true heroes,” Mumaw said. The audience involvement also means that “the cast changes every show,” which adds to the spirit of spontaneity and keeps the performers on their toes, the men said.
“We love performing for a diverse audience — from 2 years old to 90,” Crocker said. “We’ve been doing this for 30 years, so we’re aware of what tickles people.”

Crocker has been a part of the Ohio Renaissance Festival since its beginnings in 1990. “I’m the new kid,” Mumaw said of his 21 years with the local event.

Both men have Ohio roots. Crocker, whose father was in the Air Force before going to work for Paul Webb Associates, was born in Yellow Springs and he attended the Antioch School. His mother got a degree from Antioch College before the family moved when he was 8. Mumaw grew up in the Akron area, where his father taught at Case Western Reserve in Cleveland.

Home base now for Crocker is northeast Vermont, with extended teaching visits to Norway, the home of his ex-wife and where he reared his step-daughter and son, aged 25 and 15, respectively. Mumaw and his wife, who sells jewelry on the Renaissance Festival circuit, have a home in North Carolina, but they’re on the road a lot, he said.

The entire program Oct. 7 will last 70–80 minutes and feature an opening act of comedy and music. The music-making will include students from the Antioch School’s older group, with whom Crocker met in a two-day workshop last week. The focus of the workshop was making penny-whistles out of carrots. The carrots are part of an entire orchestra of instruments that can be made out of vegetables, Crocker said, adding that the audience will be surprised by what is possible.