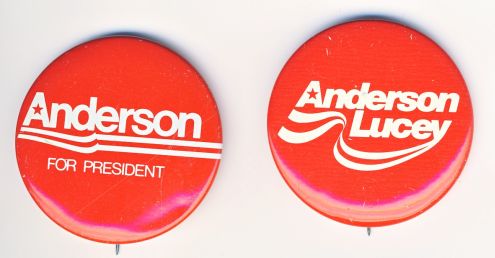 The first time I headed to the polls, I was six. It was 1980, a watershed year in national politics, and my elementary school held a mock-contest among the three candidates (did you forget there were three? Then you obviously didn’t vote for John Anderson!). Did I say mock-contest? It was utterly serious. We had voting booths set up in the gym, and they were private — there was a little curtain you whisked behind you. This was the same set-up I’d encountered shopping for school clothes with my mom a few months before, which was confusing. I was supposed to stay dressed, right? But privacy was important, I gathered. Who you voted for was a personal matter, a secret. Which meant, of course, that you immediately told all your friends.

I grew up in the Virginia suburbs of Washington, D.C. Many of my classmates’ parents were military or government (that’s how we referred to them, as though they stood in for the whole institution; when I learned, many years later, the literary term “synecdoche,” I flashed to this early example). Hence political awareness — or at least political stridency — was high, even among first graders. Discouragingly, we were just as dogmatic as our elders, from whom we borrowed political positions and posturing. At the same time, some of us had a fair amount of political naiveté. I remember learning, probably around that 1980 election, that my best friend’s family was Republican. I was aghast. But they seemed so … nice! But I liked them! How, how could this be? I had been sleeping-over with the enemy.

The 1980 election was a shock for other reasons, as well. I was certain John Anderson would win. He did not. I was certain because I knew (or thought I knew) that my dad was voting for him, and it was hard to imagine my dad voting for the wrong guy. Besides, who would actually vote for such a wicked, stupid man as Reagan? (No offense, Reagan lovers!) 50.8 percent of the American electorate, that’s who. Honest, sensible Mr. Anderson only garnered 6.6.

I believe his percentage at Occoquan Elementary was considerably higher — a true three-way split. Apparently there were a lot of parents who championed Anderson in the privacy of their home, but when it came time to pull the lever in the privacy of their booth, they either got confused or thought better of bucking the two-party system. Their children, however, took their real preference to the polls and gave Anderson the best showing a third-party candidate will probably ever make.

Reader, I’ll let you in on a secret (or have you guessed?): I voted for John Anderson. And as the Reagan Revolution swept the land, I swore (I mean, my dad swore!) I’d never vote third-party again. But I also swore I’d always vote, and I’ve come pretty close to keeping that promise. There’s a thrilling solemnity, a sense of high purpose, that I still feel every time I enter that little changing room/booth. In my lifetime, we’ve gone from levers to ovals to touchscreens, and we’ll be telepathically submitting our vote next. My understanding of voting has likewise evolved.

When I was six, the teacher said voting was about making your voice heard. Now I see it’s that, and something else. It’s about hearing what all the other voices say. And then — regardless of how you voted, and because this is the most “grown-up” sort of compact democratic societies dare to make — throwing your lot in with them.

Need a last-minute primer on the issues? Read the online version of the YS News’ 2015 Voters’ Guide.