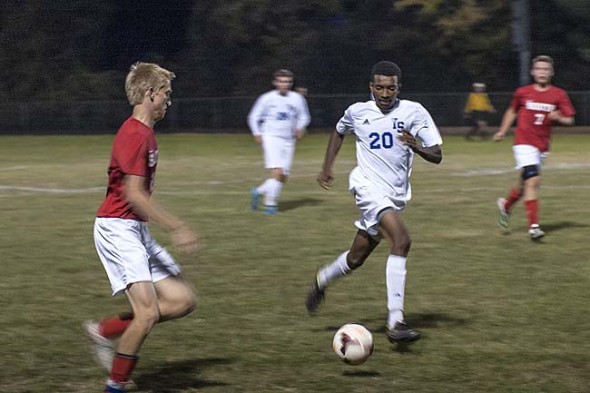 YSHS senior Kaner Butler held off a Twin Valley South player on the way to the Bulldogs’ win over West Alexandria in the first round of Div. III District tournament play last month. Last week in the district semi-finals, the Bulldogs succumbed to Summit Country Day, ranked first in the state. (photo by Aaron Zaremsky)

A lot of people don’t realize the success we’ve had,” Yellow Springs High School boys soccer coach Ben Van Ausdal said about his team’s recent tournament run. “There were around 260 teams when the tournament started, and we were one of only 32 schools left in the entire state when we finished.”

Ranking in the upper 12 percent of teams in the state is certainly something to be proud of, which is why Van Ausdal said he and his team aren’t terribly hurt by their recent loss in the semi-finals of the Ohio High School Athletic Association Division III district tournament.

“My boys gave all they had ‘til the last whistle,” he said, “I’m really proud of them.”
The Bulldogs played their last game of the tournament and the season against Cincinnati’s Summit Country Day School on Halloween, at the neutral proving ground that is Centerville Alumni Stadium. The game was replete with tricks and treats from both teams but ultimately resulted in a 7–0 victory for Country Day.

Although Yellow Springs was close behind 2–0 at half time, Van Ausdal said the defensive tactics that kept Country Day at bay were reworked as an offensive strategy, and this is where the game got away from the Bulldogs. The stress and inability-to-get-out-of-your-own-headedness of a frustrating game can frazzle even the most dedicated players. Of course, Country Day is number one in Ohio and is ranked nationally, Van Ausdal said. The Silver Knights are a phenomenal team with top-ranked players from all over Cincinnati, he said, and it was “unbelievable watching them play.”

Nevertheless, Yellow Springs hung in and fought the good fight. Senior goalie Devon Perry was singled out for his contributions to the game. “He played a tremendous game,” Van Ausdal said, and Country Day’s coach and Centerville’s athletic director — among many others — sought him out after the game to compliment him on his deflective prowess.

“He played the game of his life,” Van Ausdal said. “The score could’ve been way worse had he not played so well.”

Not a bad way for a senior to go out. The game was the final YSHS game for seniors Perry, Aaron Sherwood, Henry Potts-Rubin, Keanan Onfroy-Curley, Nathan Hardman, Jonathan Clark and Kaner Butler. Van Ausdal said he’s sad to see them go, as he’s coached them since they were freshman. They exceeded his expectations this year and were great teammates to the younger members of the team. Next year’s team is a young team, he said, but they are now very experienced, both individually and as a whole.

Van Ausdal said he’s looking forward to next season partly because of the legacy the current seniors passed on. The leadership torch will be passed to the incoming seniors, who will assume roles as mentors for incoming freshman.

“Going from playing 13-under soccer to playing with 18-year-olds on the way to college is a totally different game,” he said.

The cycle of soccer and the practice winning and losing begins again for Yellow Springs over the summer with a few pre-season tournaments, one of which will include a rematch against Country Day.

Yellow Springs boys soccer ended the season with a record of 11–7–1.