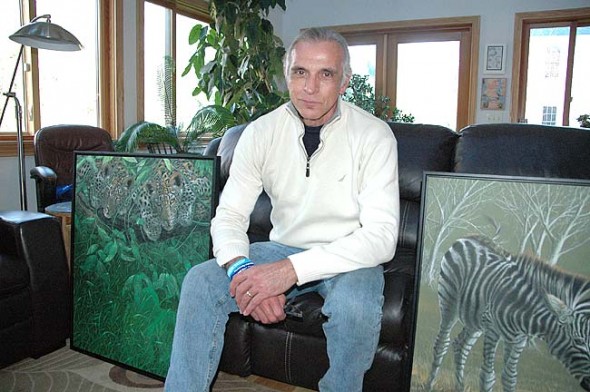 Lance Rudegeair with two of his wildlife portraits, which represent a new direction in the local artist’s work. “Endangered Species: Wildlife Art by Lance Rudegeair” opens at “would you, could you” In a Frame on Friday, Nov. 20, with a reception from 6 to 9 p.m., and remains on display through Dec. 30. When the show comes down, the gallery itself will close. Owner Sherryl Kostic is closing the combination gallery/framing business after 20 years in the village. (photo by Audrey Hackett)

Last frame for ‘would you, could you’

Sherryl Kostic’s “would you, could you” In a Frame is closing next month after 20 years in the village. The combined gallery and framing business has occupied its light, bright glass-fronted shop (formerly Joe Holly’s Cleaners) on Corry St. for the past 10 years.

Hundreds of artists from Yellow Springs and further afield have exhibited there and at the gallery’s two earlier locations at 100 Corry Street. During an interview last week, Kostic flipped through a scrapbook of past shows. She’s tried to organize at least two shows a year, she said, though some years did a cycle of smaller monthly shows. She’s particularly enjoyed mounting her locally famous “miniature shows” because of the diversity of artists involved.

“It allowed me to see what was in the community that wasn’t otherwise obvious to me,” she said. “It was a great way to meet new artists.”

At the end of December, the gallery will shut its doors. The framing business in the back will stay open for several months, said Kostic, as she finishes a backlog of framing projects — and perhaps, if the right person comes along, trains the next owner. The business is for sale, albeit quietly, and Kostic hopes a buyer will emerge. But she’s philosophical about it.

Meanwhile, she’s busy organizing the gallery’s final show, “Endangered Species: Wildlife Art by Lance Rudegeair.” The show opens on Friday, Nov. 20, with a reception from 6 to 9 p.m., and runs through December 30. Twenty-six animal portraits, most of them threatened species such as snow leopards, zebras and red pandas, will be on display. Archival-quality art prints of each work are also available. Both originals and prints will be offered for sale, and 100 percent of the artist’s proceeds will be used to support a variety of wildlife organizations.

“Endangered Species” is the culmination of several odysseys. For Rudegeair, it’s the first time a critical mass of his wildlife art has been on display. (A few individual pieces were previously exhibited at the Arts Council’s ChamberPot Gallery shows.) He’s been developing this body of work for 17 years, after many years of painting abstracts and teaching art at the University of Dayton.

“My challenge is to make wildlife art not trite,” he said last week. “I want to make it aesthetic and unique for the viewer.”

His shift in emphasis from abstracts to wild animals began after working on a wildlife bookmark project for Antioch Publishing, where his wife, Jean, served as art director. He loved the subject matter, he said, and began learning more about the endangered status of the animals he was depicting — and other species he’d loved since childhood.

“I’m not taking profits so that I’m not making money off their plight. It’s a way to make the work valid,” he said.

He calls his style “lyrical realism.” The portraits, done in gouache and colored pencil, are meticulously rendered.

“The contrast between fur and eye makes the realism,” he said.

He works from dozens or hundreds of references, and often doubles the image in reverse to depict animal “twins.” He likes to use a close perspective, with one animal a little in front of another for depth, in order to focus the viewer’s gaze, he said.

Yet Rudegeair also allows himself a bit of looseness, even playfulness, in setting the scene. “Arctic Zebras,” for example, depicts the savannah-dwelling creatures in a twinkle of falling snow. His earliest wildlife portraits were Christmas cards, a tradition he has continued even as he’s refined his approach.

“I’ll try to do a Christmas card first [before a larger painting] illustrating an animal in the snow,” he said. “When I first started, the works were more stylized and Christmassy.”

But as he’s gotten “more serious about saving the animals,” his portraits have gotten more serious, too.

The show at “would you, could you” is nearly a decade in the making — another odyssey. Kostic said Rudegeair approached her about organizing a show eight years ago.

“He had goals he wanted to meet, and he’s worked to meet them” in this current show, she said. Watching an artist develop is something Kostic enjoys.

“It’s satisfying to see a good artist move in a new direction,” she said.

She’s even had a hand in helping artists take the leap of reinvention. Local artist Jason Morgan credited Kostic with encouraging him to try still lifes, the foundation of his current career, during an artistic lull in 2008.

“I painted one and she really liked it,” he said. “She said, ‘Do a bunch more and I’ll give you a show.’” He did, and she did, and “almost everything sold,” Morgan said.

“That was my ‘coming out’ party,” he laughed.

An additional layer of the odyssey represented by this final show is the close of Kostic’s framing career. She got her start apprenticing to a framer in Columbus, then ran a couple of different framing shops in the city before shifting her business to Yellow Springs in 1995. She’s lived in the village since 1968.

She studied art at Ohio State, and has gotten her creative fix in the gallery aspect of the business, working with artists to develop exhibitions. Her criteria for selecting art is simple, she said.

“I look for good art, usually from an artist who’s a little more established.”

Framing is more about “craftsmanship,” she said. Referring to the layout of the store, she added, “In the back, it’s total precision, total craftsmanship; in the front, it’s creative and fun.” She’s been happy with the balance all these years, and the two sides of the businesses have dovetailed.

“Framing is half of a piece of art,” said Morgan. “Most of my paintings don’t get framed, but when they do, I’m always thrilled by Sherryl’s framing.”

Kostic is emphatic that she’s not going to be tempted back into framing after the store closes. However, she’s eager to pick up her own art.

“I’m not even sure what that is after all these years,” she said, recalling the many art forms she pursued as a student.

“I’d love to do some sculptures. I want to play around a bit, do a whole lot of experimenting,” she said. There are artists in the village she’d like to approach for mentoring — much as, in a variety of ways, she herself has served as a mentor.

“She’s always been amazingly encouraging,” Morgan said. “We have a great history, and it’s a relationship that’s hard to replace.”

Kostic and her husband, Dan Dixon, own Last Adventure Farm on King Street, and Kostic plans to deepen her involvement in the 10-acre operation. She has grandchildren, as well as parents, to care for.

“I’d like to get creative in all these new ways,” she said. “And I might have a social life again.”

Asked why she’s leaving the business now, she said, “It’s just time.” Running both gallery and framing shop was a “really big commitment,” she said, that could easily turn into two full-time jobs. “Not that I want to scare any potential buyers away!” she laughed.

Rudegeair said he is sorry to see the business go, a sentiment Morgan echoed.
“She always had something interesting,” Morgan said. “She’s been a consistent presence in the community. Other galleries have opened and folded. Sherryl has had presence and oomph.”