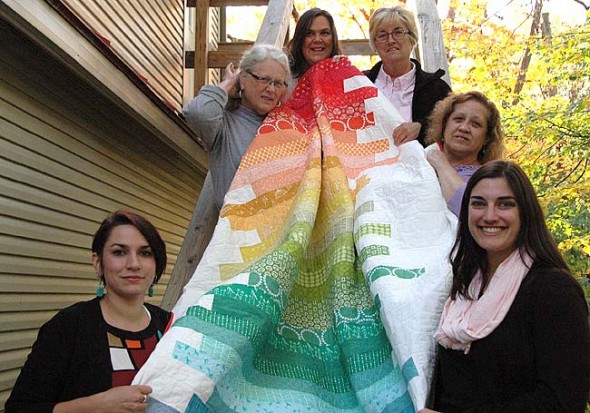 Anna Haller, lower right, created this rainbow-colored quilt for the newly formalized Village Assistance Network to raffle this fall. VAN continues the work of the informal $10 Club started by Chrissy Cruz to meet emergency financial needs in the village. Pictured around the quilt are the group’s board members, clockwise from left: Lindsay Burke, Kate Anderson, Wendy Ricks, Jane Nipper and Cruz. (Photo by Carol Simmons)

Where do we turn when life throws a financial challenge at us that we can’t handle on our own? If we’re lucky, we have family or friends who can help. But sometimes they don’t have the immediate resources, either. When a friend of Yellow Springs resident Chrissy Cruz couldn’t pay her utility bill and faced an immediate disconnection of service, Cruz wanted to help, but didn’t have the personal means. She did have $10, however, which gave her an idea.

Thus the “$10 Club” was founded.
That was about a year and half ago, and since then the initiative has continued in an informal, word-of-mouth manner. Cruz estimates that the effort has assisted about 10 families. “I could list everyone it’s helped, but I can’t list everyone who has contributed — that would be a really big list.”

As needs arose, Cruz posted fundraising pleas on social media platforms, including Yellow Springs-themed group pages on Facebook. She also has launched two companion websites — tendollarclub.weebly.com and ysvan.weebly.com — where donations can be made through Paypal payments.

She said that establishing a means to make contributions online offers a convenient way to give and it reduces some of the legwork for her in collecting donations, as she doesn’t own a car. Unfortunately, she added, there is a fee for Paypal payments, so contributions don’t go as far when made online.

As the emergency fundraising effort continued, Cruz began to feel the limitations of overseeing and managing it alone. After one particular request for help was made that she didn’t think met the parameters of the initiative, she felt uncomfortable saying no without the support and accountability that a more formal operation with a board of directors can provide. “We needed to have a whole board to make those kinds of decisions,” she said.

The result was the establishment of the Village Assistance Network. The board members, in addition to Cruz, are Jane Nipper, who is serving as secretary and treasurer; Wendy Ricks, who works with the victim assistance program for the city of Xenia; Lindsay Burke, who is active in Black Lives Matter; and Kate Anderson, a community activist who has organized in recent years the annual Share the Joy Christmas tree gift-giving effort at the library.

The board members agree that we have neighbors in need, and the $10 Club is proving to be an effective way to help.

“It’s what Yellow Springs is all about — helping each other,” Nipper said. “We can’t get away from that. We can’t give up on each other.”

“I know there are a lot of young families who struggle to live here,” Burke said. “It’s hard to make ends meet sometimes.”

“It’s what we’re called to do,” Anderson agreed.

The VAN board’s first official meeting was last week, and its members are looking ahead to the holidays with a raffle of a quilt to raise seed money and awareness about its existence.

Cruz, who is a member of the Village’s Human Rights Commission (HRC), said that she was inspired by the organizational work of the local NAMI (National Alliance on Mental Illness) affiliate, which obtained a $500 grant from HRC to finance a raffle for an artist-painted rain barrel last year. She said she thought that a quilt would make not only a good raffle item, but also would reflect the Village Assistance Network’s mission of caregiving and comfort in times of need.

The HRC granted her proposal, and the quilt is newly made by local resident Anna Haller, a Yellow Springs High School graduate who recently moved back to town after graduate school and working in Maryland. She has opened HootnHaller Studio, which offers sewing and handcrafting classes and services.

Haller said that she was happy to be asked to help. For the bed-sized covering’s design, she said, “we decided on something that is modern looking, because that is more my aesthetic. And we wanted it to have rainbow, to reflect Yellow Springs.”

Cruz said that she hopes to be able to display the completed quilt at village churches and other suitable locales in the weeks leading up to the drawing before Christmas. (Her original efforts to launch the raffle earlier in the year are still described on ysvan.weebly.com, but that information is out of date.)

She said she anticipates that the group’s request of $500 from HRC will be the only time it seeks Village funding. “We don’t want this to take up the Village funds,” she said. “We want it to be the community supporting itself — completely independent.”

She said she sees the effort as following in the footsteps of Mary Ann Bebko, who for nearly 40 years, until her sudden death in 2006, managed the Village Emergency Welfare and Food Pantry program out of her home. The Food Pantry moved to the Methodist Church, where a communitywide board continues to oversee the pantry operation, and several specific forms of local assistance are offered through the Police Department and Village utilities offices, but some of the other emergency needs that Bebko and other community members variously met are going unfilled.

“There are desperate needs in our community right now,” Cruz said. “I’m so excited that [the Village Assistance Network] is coming together.”

One Response to “Villagers stitch together aid”