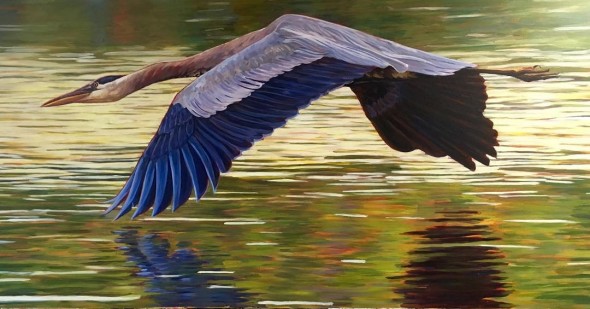 It was a dark and stormy night … perfect weather for A) beginning a story, B) hoisting a beer at the brewery, C) bird watching, or D) all of the above.

If you guessed D) all of the above, you were obviously at the Yellow Springs Brewery on Saturday evening, with painter Travis Tarbox Hotaling and his flock. Did I see you there? I hope so. It was a beautiful scene. Seven birds flew in for the occasion: a blue heron, a kestrel, a red-tailed hawk, a snow goose, an indigo bunting, a scarlet tanager and a little olive songbird whose name I now forget. Did I say little? I meant to say big. No, big. BIG? That’s better. The scarlet tanager is a tiny bird. But not last Saturday. It loomed several feet high, glancing coyly over one giant glossy wing as if to say, I am finally as mighty as I feel.

For me, though, the heron was the total heart-throb, the show-stopper, the bird of birds. His rosy neck and blue-grey shoulders rippled like water; he was water flying over water, an awesome feat of paint and metaphysics. It’s hard to paint flight, but Travis did it. It’s also hard, extremely hard, to paint water, but Travis did that, too. On Saturday evening he said he painted the water beneath the bird in a state of focused frenzy — slash, slash, slash of brush to canvas. The result is the opposite of chaos, but also the opposite of stasis. Like the heron’s flight, it is flow suspended.

I confess I measured the painting (it’s the same length, more or less, as my own wingspan) with a wistful thought of buying it and hanging it in our new home. Will we do that? I don’t know. We have one heron artwork already, also life-sized though of a very different style and spirit, and a hawk print, and two dancing cranes cast in aluminum. And a clay owl, and a Mexican ceramic dove, and several bird pillows…. Sometimes your possessions tell a story you might not have thought to tell yourself. It was a dark and wing-swept night…. Turns out, by the testimony of our possessions, we’re bird people! We did drive two finch eggs (stillborns from a nest in our porch eaves) from New Mexico to Ohio. They now rest, ecumenically, in a hummingbird nest my husband found empty by the road during our first summer in Yellow Springs.

Travis’s dad, Dale, lives across the street from us, and so we’ve come to know Travis a bit over the past several years. Curiously, one of our main topics of conversation, aside from art, has been birds. Primarily a landscape painter, Travis is also attuned to the local songscape — the avian fauna flitting in the flora he paints so well. Two summers ago, we heard and saw several Baltimore orioles in our neighborhood. Their flashes of orange are unmistakable, almost unreal, and their song is one of the clearest and cleanest sets of notes you’ll hear from any sort of throat. Come to think of it, our birdtalk that summer was really the start of knowing Travis.

On Saturday, Travis noted how much he loves to play with scale. Landscapes are vast, of course, but he typically paints them small. Birds, many of them, are small (don’t tell the tanager!), but in this show he painted several of them many multiples larger than life. The magnification works. I mean, it WORKS! The only thing missing was a six-foot hummingbird. Travis said he’d hoped to tackle that, but ran short of time. Still, he expects to keep painting birds beyond this show, so a hundred-pound hummer may show up this spring at a trumpet vine — each flower the size of a real trumpet — near you.

Travis called his show Birding is Hard. The title is surely tongue in cheek (tongue in beak?). Birding, I’ve decided, is eeeaassyy. I mean, just look at how many we spotted last Saturday, despite the early dark, the fine mist of rain, the bright glasses — beer, not field — we held up for a better view.