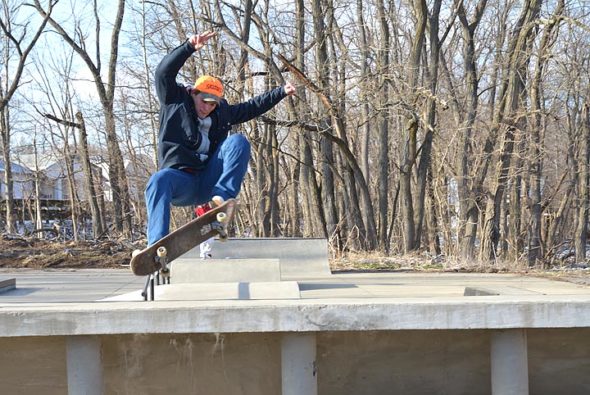 Cameron Rohr, 20, of Springfield, performed a “truck bash” at the Village skatepark on Monday. Despite temperatures in the teens, Rohr slashed and soared with his friends for at least three hours. (Photo by Megan Bachman)

Cameron Rohr, 20, of Springfield, performed a “truck bash” at the Village skatepark on Monday. Despite temperatures in the teens, Rohr slashed and soared with his friends for at least three hours. “Heat’s in the board,” Rohr said to buddy Danny Hockett, who was warming his hands with his breath before attempting a jump called a Benihana. The youth have been coming to the local skatepark since they were kids and praised the spot as a place for friendly competition. They were bummed, but not too fazed, by the recent demolition of six wooden ramps at the request of the Village’s insurance company and hoped that funds could soon be raised for new equipment. Five concrete ramps and one rail remain at the park for ollies and grinds, but a large section is now empty. Seen leaving the skatepark several hours later and asked how they persisted for so long in the cold weather, Rohr responded, “Skate or die!”

As of Oct. 15, indoor visitation at Friends Care Community is suspended until further notice due to COVID-19 case increases in Greene County. Click here for details.