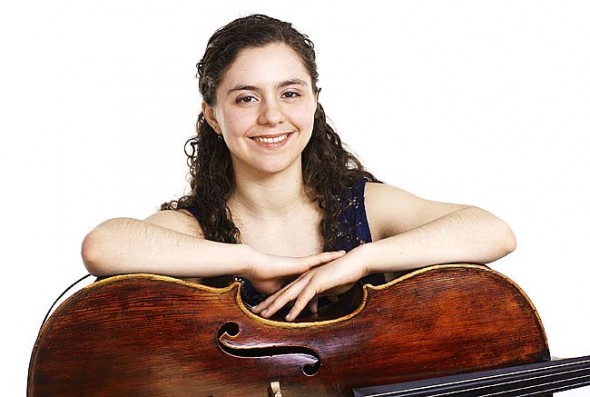 Switzerland’s Chiara Enderle, whose family has deep roots in the Yellow Springs community, will perform with the Springfield Symphony Orchestra on Jan. 16. The concert will feature Enderle as soloist in Dvorak’s Cello Concerto, “one of the most epic cello concertos, full of power and majestic strength.” (submitted Photo © Jannette Kneisel)

Yellow Springs, already a highly musical village, counts a Swiss classical music star as part of its family circle. Switzerland’s Chiara Enderle, whose family has deep roots in the Yellow Springs community, is a rising star in the European classical music scene and routinely plays around the world as a featured soloist. In fact, her recent visit to Yellow Springs for holiday festivities was curtailed so she could fly back to Europe for a series of gigs. However, as the life of a professional musician demands, she will soon be on a plane back to the area to play a concert in Springfield, as a soloist with the Springfield Symphony Orchestra on Jan. 16.

The concert is entitled Suite Dreams, and will feature Enderle as the soloist in Antonin Dvorak’s Cello Concerto. The concerto is “one of the most epic cello concertos, full of power and majestic strength,” she said in a recent phone interview. The piece was inspired by Dvorak’s time in America, when he learned that his sister-in-law was seriously ill. He was crushed by the news and incorporated one of her favorite songs into the concerto. Given the poignant history of the piece, Enderle, 22, said it’s something she’s only felt recently mature enough to play with the tenderness it demands.

Yellow Springs resident and classical music enthusiast Jeff Huntington helped arrange Enderle’s upcoming performance. Last winter he showed Peter Stafford Wilson, the director of SSO, some YouTube videos of Enderle playing. Classical concerts typically feature a guest soloist backed by the host orchestra, and so Wilson got in touch with Enderle and invited her to play in Springfield.

Enderle’s local connection was part of the reason for the pairing with the SSO, but Enderle’s accomplishments speak for themselves. She plays approximately 60 concerts per year, and has recently played in Russia, Poland, England and Japan. She has no manager and books all of her engagements herself. She has played a number of times in Yellow Springs, including a performance for Chamber Music Yellow Springs as part of the Carmina Quartet with her parents, Matthias Enderle and Wendy Champney. The concert, broadcast over the radio, was played to a full house and received a standing ovation.

Enderle began playing cello at age four, although it took her a few years to understand that she had chosen the right instrument. Cello sounds really scratchy and unpleasant when you are learning, she said, which was frustrating when contrasted with the beautiful music she was surrounded with. But it all clicked a few years into playing, and she recalls the awe she felt when she was able to play her first adult piece. Her musical proficiency is part of the family legacy, as both of her parents are professional musicians. In fact, Enderle joined the family business as part of the Carmine String Quartet, in which she plays alongside her parents.

Enderle was born in Switzerland but has a long history with Yellow Springs. Her mother was born and raised in town, and her grandmother has lived in the village for over 50 years. Grandmother Peg Champney, bookkeeper for the News, founded the Friends Music Camp, or FMC, an immersive music camp for kids and teenagers. Enderle is an alumnus of the camp and has played a number of benefit and holiday concerts with and for it. In fact, her upcoming concert with the SSO is also partly a benefit for the FMC.

There is a certain romanticism to the idea of traveling the world and playing concerts, but Enderle said her profession is punctuated by the occasional strains of melancholy befitting the pieces she plays. She often travels alone and becomes very invested in the music, but sometimes the post-concert high is experienced alone in a hotel room, or waiting by herself in airports.
But she grew up touring with her parents as a kid and said the life she is living feels “quite normal.” Music is a natural extension of herself, she said, and what she enjoys most is following the emotional trajectory of a piece of music, and translating that experience for herself and for her audience.

And that feeling is especially meaningful when she gets to bring that to people she knows and loves, which is why the concert in Springfield will be so special, she said.

The concert will be held at 8 p.m. on Saturday, Jan. 16, at the Clark State Performing Arts Center in Springfield. Tickets can be purchased at the News office and through springfieldsym.org. Enderle will perform at the Yellow Springs Senior Center the following day, playing with local pianist Sam Reich.