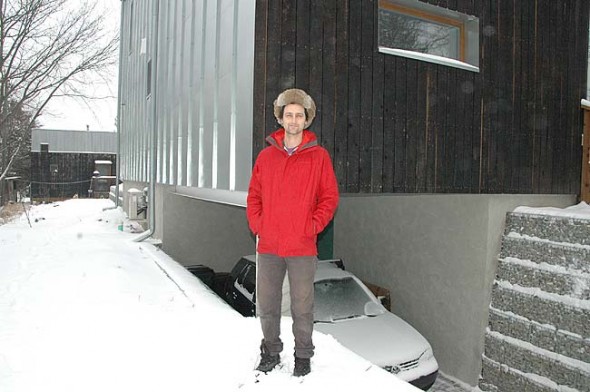 Local residential designer Alex Melamed, above, who designed both a passive house and a tiny house on his Walnut Street lot, will be one of eight speakers at “8x8 on Building Resiliency,” this Saturday, Feb. 20, at 1 p.m. at the Antioch College arts and science building, room 219, part of a weekend of events aimed at enhancing resiliency of local buildings. The event will be followed by a documentary on the “New Pedestrianism” on Sunday, Feb. 21, at 1 p.m. at the Little Art and a home energy saving demonstration at 3 p.m. at the Yellow Springs Library. (Photo by Diane Chiddister)

How exactly do you make your home more energy efficient? Are there inexpensive ways to do so? What does it mean to live in a tiny house?

These are only a few of the questions that will be addressed at 1 p.m. this Saturday, Feb. 20, at “8×8 on Building Resilliency,” a panel discussion that spotlights eight villagers and building professionals who will each speak eight minutes on the topic. The event takes place in room 219 of the Antioch College arts and science building.

The panel includes builder Andrew Kline on energy efficiency fixes for your home “from $50 to $50,000”; landscaper Nadia Malarkey, on how to use outside space and planting to increase efficiency; residential designer Alex Melamed, who has built both a tiny house and a passive house; Emily Seibel of Home, Inc.; Andi Adkins of Antioch College on the college’s proposed Antioch Village housing project; Beth and Andy Holyoke on straw bale construction; and Eric Johnson, on retrofitting homes for energy efficiency.

The event is part of a weekend lineup of activities about making Yellow Springs more adaptable to the probable future effects of climate change by making buildings more energy efficient and community-oriented, according to Melamed, one of the organizers. On Sunday the events continue with a free film, “New Urban Cowboy: Toward a New Pedestrianism,” about  urban planner Michael Arth and his work to increase both community and walkability in a Florida underclass neighborhood. The film will be shown at 1 p.m. Sunday, Feb. 21, at the Little Art Theatre.

And following the film, at 3 p.m. at the Yellow Springs Library, a practical demonstration of simple energy efficient strategies such as caulking and weather stripping will take place.

The events are all aimed at educating villagers about how to make Yellow Springs a more resilient community in the face of climate change, according to Melamed and Susan Jennings of the Yellow Springs Resiliency Network.

“We’re trying to think ahead to strategize what people can do,” Melamed said.

The February focus on buildings is part of an ambitious series of programs, sponsored by the Resiliency Network, that aims to enlighten villagers on a variety of strategies for strengthening the resiliency of Yellow Springs. In November the group focused on enhancing local food production and in January, the focus was on reduction of waste. Next month, events will center on the sharing economy, while in April renewable energy will be the focus. And in May, the series will end with an emphasis on transportation.

“There are different ways that people can lean into this conversation,” Jennings said.

Overall, Yellow Springs stacks up well in terms of the energy efficiency of local buildings, especially regarding new houses, Melamed said, estimating that probably 15 or 20 local homes are either certified passive houses or near passive houses, a number that puts Yellow Springs, per capita, above almost anywhere else in the country. But building a passive house is obviously a large financial investment, and most people need strategies that are far less expensive. One aim of this weekend’s programs is to let people know of the financial range of possible strategies, Jennings said.

“People think they have to wait until they have more money, but there’s a scale of things that can be done,” she said.

And people also need to look beyond strategies for energy efficient buildings toward how people choose to live together, according to Jennings, who also directs Community Solutions.

“We need to recognize that technology and building techniques will only take us so far,” she said. For example, Jennings said she’s excited by the proposed co-housing community at Antioch College because it’s an example of people choosing housing models that emphasize community, and meeting each others’ needs, which is another strategy for enhancing resiliency.

While no one knows for sure what the effects of climate change will ultimately be, predictions include higher temperatures (already a reality) leading to more heat-related illness along with changing seasons and growing patterns, and more erratic weather, including stronger storms and more flooding. The village’s ability to adapt to these changes will ultimately depend on the strength of its community, organizers believe.

“People will need to support each other,” Melamed said. “The robustness of the community will help us weather the changes.”

The connection between resiliency and a robust and affordable community will be made at the Saturday event by Emily Seibel, executive director of Home, Inc.

“The connection between energy and affordability is powerful,” she wrote in an email this week. “Households of lower income people often pay a higher percentage of their income to utility costs and are more likely to live in inefficient homes.”

Also, Seibel said, the emphasis on strengthening community relates to both environmental resiliency and welcoming all races and economic classes to Yellow Springs.

The importance of a robust community is reflected in the Sunday afternoon film, “The New Urban Cowboy,” which shows the film’s protagonist working in a depressed residential area in Deland, Fla., to create more inclusive spaces, slow traffic and enhance walkability, Melamed said. Organizers hope that the film inspires villagers to consider whether Yellow Springs could benefit from such changes and if so, how to make them.

The series of events sponsored so far by the Resiliency Network seems to be working as hoped to tap into new energy, according to Jennings, who said that the group gained new members after both the local food month and zero waste month. She hopes that February brings more new participants who are concerned about how to enhance resiliency in Yellow Springs.

“I’m looking forward to people wanting to be part of this conversation joining in,” she said.