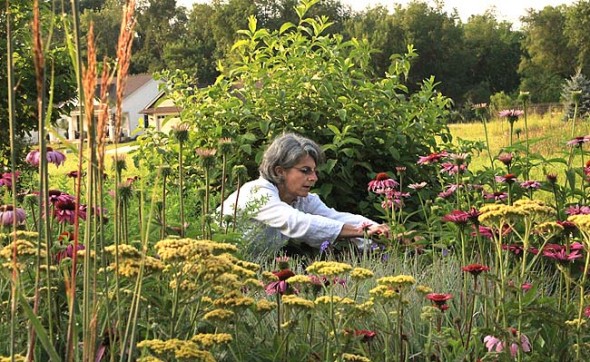 Local garden designer Nadia Malarkey recently learned that an ecologically innovative garden she designed in Yellow Springs was a finalist for a prestigious award from the Society of Garden Designers in the UK. The awards ceremony takes place in London this week. Here, Malarkey works among native plants in the lush Birch III garden at the height of blooming season. (Submitted photo by Nadia Mulhall)

Designing, down to the roots

A local garden, planted with native species; an international contest; a part-time resident with coastal ties; a local garden designer with far-flung roots. These are the appropriately disparate elements of a gardening practice, and a life, that have come together for villager Nadia Malarkey with the recent news that one of the Yellow Springs gardens she designed has been short-listed for a prestigious award from the Society of Garden Designers, or SGD, a UK-based organization.

“I couldn’t believe it,” said Malarkey in an interview at her studio last week. It was her first submission to the SGD. The application took her 67 hours to complete; had it not been for an “exceptionally rainy May” last spring, she said, she couldn’t have found the time away from her clients’ gardens to apply.

The award ceremony takes place on Jan. 29, in London, and Malarkey will be there to talk hardscape and hedgerows with fellow designers, as well as visit with her son, Michael, who lives in London. Regardless of whether her submission ultimately wins in her category, the recognition from the judges is significant.

“It’s a huge honor,” she said. “It gives credibility to my work.”

An ‘organic’ path to gardening
Malarkey has been designing gardens for 20 years. She is self-taught. Her work is strongly influenced by English garden design — contemporary British designers John Brookes and Russell Page are two touchstones — and reflects her growing appreciation for 20th-century American landscape designers who worked in the Midwest, among them Jens Jensen and James Rose, as well as a deep commitment to native plants and ecologically beneficial practices. She is an avid reader, she said, and a relatively fearless experimenter.

“You can’t be afraid of making mistakes. Garden design thrives on trial and error.”

Her gardening roots go deep. Born in the UK, she was raised in Nigeria, Canada and Beirut, Lebanon. From mid-childhood onwards, Beirut was her home. Experiences of the natural world connected her to all these places, she said. Around age 10, visiting her grandmother in England during the summer, she planted her first garden: lettuce and radishes. Weeds soon became a problem.

“So I read in the newspaper about weeds, and learned you could make a saline solution — salt and warm water — to get rid of them.” She poured the solution on her garden, and the next day, everything had died. Taking the lesson to heart, she planted again.

Though a garden enthusiast from that day forward, her path to becoming a garden designer was “as organic as a garden itself,” said Malarkey. She was a literature major in college, attending the American University in Beirut, where her father, distinguished literary scholar and peace promoter Dr. Suheil Bushrui, taught. She met her future husband there, Jim Malarkey, also a literature professor (and later head of the humanities program at Antioch University Midwest). The family was evacuated by U.S. Marines after the U.S. Embassy bombing in 1984 during the Lebanese Civil War. Jim, an Ohio native, and Nadia Malarkey settled in Yellow Springs, where they raised three sons.

Malarkey has never returned to Beirut.

“The loss of place was profound,” she said. “I lost my playground, my imaginative space: olive groves in the mountains, stone structures, cypress trees, all the shapes and textures, the Roman ruins of Byblos.”

That devastating loss, together with her abiding sensitivity to place, underlie Malarkey’s desire to connect others to “beautiful spaces that they can love and be stewards of,” she said. “I’m always trying to help clients experience how precious and sacred the spaces are where they live. I want to connect them at a very deep level to a sense of place.”

In 1987, she and Jim bought the Yellow Springs home they still live in, and she began “tinkering” in the space that would become their garden — her first, and ever-evolving, design. (It’s unconventional and even humorous; one of its features is a tipped-over red London callbox, a prop from a play.) Nine years later, she began offering her services to others, creating about one garden a year while raising her sons. In 2009, with two of her three sons in college, she was ready for a change. Unsure whether to deepen her commitment to garden design or leave the field and “find a real job,” she went through a period of “intense soul searching,” she said.

“I was spending time meditating and reflecting, asking for some kind of guidance from the universe.” Guidance came in the form of a few timely queries about her services, as well as encouragement from her husband not to underestimate her substantial knowledge and accomplishments. In 2009, she went full time as a garden designer.

“I just thought, ‘I’m going to step through the door,’” she said. “And so I did. I started saying ‘yes’ to every project.” Things flowed from there, she added.

In her two decades as a designer, Malarkey has created dozens of gardens throughout the area, including 32 gardens for clients in Yellow Springs. More are in the works. The patio space at the Winds Cafe is her design. Always careful to “not create harm while creating beauty,” Malarkey has used organic gardening practices from the start. Over time, she began incorporating native plants as she learned more about them and came to understand their essential role in anchoring local ecosystems.

“We live on one of the most biodiverse continents in the world,” she said. “Nothing limits what native planting materials are available except your knowledge and imagination.”

She sees herself as more of a “midwife” than a creator. “Nature is bigger than us, almost always. Well, always,” she laughed. Her role, she said, is to know nature and use that knowledge to bring something natural, yet artistically conceived, into being.

To that end, she’s involved in all aspects of creating, preparing, planting and, if clients wish, maintaining a garden. She works with a local crew she’s assembled, but stays “very hands-on.” In the case of maintenance, only hand tools and manual labor are involved, to ensure a light ecological footprint. Good soil is the foundation of any garden, she said, and so she works with local organic farmers to break up the hardpan — the dense layer of compacted soil below the topsoil — and till the soil. Depleted soil may need to be amended with compost.

“If you feed the soil, plants respond,” she said. And when plants respond, pollinators and birds flourish. Healthy soil is resilient, she explained, helping native plants resist drought and survive extremes of temperature. By contrast, a chemical-driven landscape strips the soil, and “your garden becomes a chemical junkie,” she said.

‘Regenerating suburbia’
The garden recognized by the SGD embodies all these principles and practices. Malarkey titled her submission “Regenerating Suburbia,” which is exactly what she believes a well-crafted native garden can do — bring about ecological and spiritual renewal.

Located on a third of an acre in the Birch III subdivision in Yellow Springs, the short-listed garden is owned by Sheryl Schooley, a part-time resident of Yellow Springs since 2012 and a native of lowland Georgia. Explaining the genesis of the garden, Schooley said she heard a talk about how native plantings could attract pollinators — and help reverse steep declines in North America’s population of bees, butterflies and moths. Even a 10’ by 10’ plot can make a difference, she learned.

With that heartening notion in mind, she approached Malarkey. From initial conversations in September of 2012 through to the first plantings in June of 2013, a garden took shape that would use native plants and their cultivars, known as “nativars”; provide high-quality forage to support area pollinators; and offer a beautiful, restful space that was at once deeply rooted in the Midwestern landscape and evocative of the grass-rich seascapes of Schooley’s native Georgia.

“The same UPS guy who delivered the little plants couldn’t believe it” seeing the garden in lush bloom two years later, said Schooley. Within weeks, monarchs arrived. Birds, including hummingbirds, followed. Schooley has been amazed by the diversity and beauty of pollinator and bird species she’s observed in her still-young garden.

Walking around Schooley’s garden on a cold, grey afternoon last week, Malarkey pointed out, with a parent’s pride, some of its highlights. The garden wraps around the house in an arc, and repeats that arc in the arrangement of its beds and architectural elements. A Mobius strip sculpture, done in corten steel, which has a rusty-reddish patina, provides a focal point in a bed of grasses in the back. Malarkey designed the sculpture, as she’s done with several area gardens. Its distinctive form encapsulates the ecological vision she and Schooley share.

The Birch III garden is a “four-season garden,” designed to provide visual interest in the winter no less than during the blooming seasons.

“The winter garden is about seedheads, shadows, empty spots and form,” said Malarkey. And sound. A living wall of espaliered American beech trees, which retain their leaves in winter, made a papery, almost tinkling sound in the wind; clumps of tall native grasses rustled softly like brushes on a drum.

If the grasses recall the seascape of Schooley’s Georgia home, the American yews trained into columns elsewhere in the garden are reminiscent of the cypress-dotted landscape of Malarkey’s youth. Other plantings include native ferns (gorgeous, plump-lobed and still green), junipers, asters, Kentucky yellowwood trees, spice bush, vernal witch hazel and a native dogwood species that some call weedy, but Malarkey finds beautiful.

“You plant not just for today, but with an eye toward tomorrow. Unlike architecture, you’re working with a living landscape,” she said. “You’re always thinking about how a garden will look in different seasons, and also 10, 15 years from now.”

This particular garden represented a turning point for Malarkey.

“It was an education and a risk,” she said. “When I got Sheryl’s call I realized that this was the first time I was really being given the opportunity to show how you could incorporate very good design in a regenerative way — to make a garden that was ecological and also beautiful.”

Around the same time, Malarkey experienced another turning point. Attending a cultural landscape conference, she was exposed to the deep history of modern American landscape design, including early- and mid-century designers who sought to preserve, reclaim and reframe the Midwestern prairie.

“I was resonating so much,” she said. “It opened my eyes.” All of what she was learning was tied up with being American, she said. “It was so emotional. I realized that this is my place, these are my people. I live in the U.S. now, and it is through gardens that I can serve this nation.” As an outgrowth of this realization, she has put forth to other designers her idea of creating an “American Founders’ Garden,” a public garden to celebrate the founding fathers’ passion for horticulture, agriculture and the natural world.

She discovered, or recovered, a sense of place, and a sense of mission connected with place, that had been eluding her, she said. “I thought, ‘I can do this.’ Before, there was always a feeling of struggle.”

Having once lost a beloved place, creating or deepening the magic of place for others has become her work.

“I remember one client looking out at his garden and saying with such wonder, ‘Nadia, whose garden is this?’” she said. “The look on his face was amazing.”

One Response to “Designing, down to the roots”