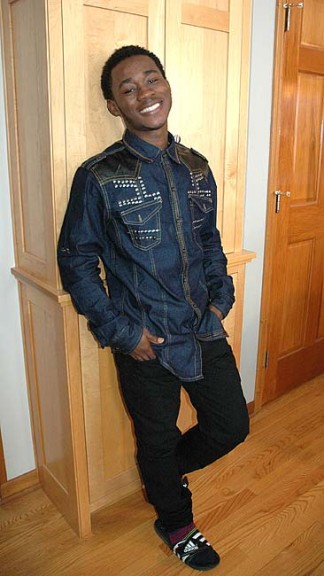 From Liberia to the village

Seventeen-year-old Levi Jackson, from Liberia, has lived through a brutal civil war and the devastating Ebola epidemic that killed thousands of people in his western Africa nation, giving him compelling reasons to seek educational opportunities in the United States.

But Jackson says the most powerful motivation for him to become a foreign exchange student through the American Field Service, or AFS, was the chance to be part of a larger family. As an only child, he says he longed for siblings. Now, placed with the Naomi Ewald-Orme and Jim Orme family in Yellow Springs for the 2015–16 school year, he has just that. Two brothers and two sisters, as well as visits from extended family members, keep the house full and busy.

And Jackson says he’s very happy for that experience. “I praise God for the host family that hosts me,” he said earlier this week while eating a snack in the Orme kitchen amidst the swirl of family life.

Jackson is among three exchange students spending the school year living in Yellow Springs, according to Marla Gamble, the AFS host coordinator in the Dayton region. Also attending Yellow Springs High School is Alimatu Musah, of Ghana, who goes by Alima. She is hosted by McKinney Middle School teacher Aurelia Blake. And the other locally hosted AFS student is Amon Hentschel, of Germany, who attends Greenon High School and lives with James and Jocelyn Hardman. Gamble said that the Hardman family “once hosted two AFSers at once while their own son Jacob was an AFS student in Germany.”

The contemporary AFS program has its roots in World War I and the formation of a group of volunteer, battle-front ambulance drivers. With the end of the armed conflict, the group evolved into a broad effort to promote world peace through student exchanges. Today, the international nonprofit organization operates in 50 countries around the globe.

Jackson’s AFS journey was more fraught with uncertainty than most students experience because of the medical emergency in his home country. After being accepted into the program, his plans were put on hold for a year because of travel restrictions placed on the countries where the Ebola outbreak was most virulent. Once cleared to travel, he was placed with a host in Denver, Colo., who he said rejected the placement because of continuing fears about the disease. He said the string of disappointments were a lesson in the virtue of patience, because he thinks his eventual placement in Yellow Springs is where he was meant to be.

“Yellow Springs is better than Denver,” teasingly interjected host brother Theron Orme, a 2015 Yellow Springs graduate who was making a snack of his own in the family kitchen.

Gamble said that both AFS students at Yellow Springs High School this year are Kennedy-Luger YES scholarship recipients. According to the program website, the Kennedy-Lugar Youth Exchange and Study (YES) program is funded by the U.S. Department of State and provides scholarships for secondary school students from countries with significant Muslim populations to spend an academic year in the U.S.

Recipients, according to Gamble, “get special access to politicians, sights, etc., in Washington, D.C., durig their stay as well as a monthly government stipend. They are always truly the ‘elite of the elite’ in our experience as they have beaten out hundreds of thousands to get the scholarship spots.”

Jackson is one of eight Liberian students selected to receive the scholarship, Gamble said.

Jackson said he learned about the scholarship from a Peace Corps volunteer at the school he attended when he went to live with his father in Zorzor. He said he had been living with his mother in the capital, but with the Ebola outbreak, he was sent to his father, who is a medical professional. Even there, however, the disease forced the closing of the schools, and he went without formal education for a year.

He said that securing the scholarship involved passing three steps: taking a listening and comprehension test, writing an essay and having a successful interview. He completed the process in 2013.

“I was so glad to come to the United States,” he said about arriving two years later. “It was a challenge, but finally I came.”

Gamble and Ewald-Orme, Jackson’s host mother, agree that he is making the most of his time here. “He plays soccer — he got all-district honors — he plays basketball for the high school, he’s about to run track, he’s a good dancer, and he’s a drummer,” Ewald-Orme said. He’s teaching dance to other high school students and will present a talent show at the end of the year as his senior project. As a drummer, he performs with the high school band and with the choir at Central Chapel A.M.E Church. “He’s very much involved in his Christianity,” Ewald-Orme said.

Jackson said his activities helped him meet people and make friends. He said that he had difficulty at first getting to know other people because he held back some, wanting to choose his friends wisely. He said he didn’t want to jeopardize his scholarship by getting mixed up with the wrong crowd. “If you smoke, they send you home,” he said, citing an example of the rules for an exchange student’s behavior.

His other difficulty was adjusting to new foods. Coming from a diet of primarily fish and rice, he said he had to get use to a different way of eating. He doesn’t especially like vegetables, he said, referring to lettuce as “leaves.” He said, partly in jest, that he was afraid to eat the salad on the plane coming to the U.S., because he feared it would make him sick and people would think he had Ebola. But he’s getting used to it, he said. “December was the month of the vegetables,” Theron Orme interposed.

Adjusting to a diet with more vegetables seems minor in scale compared to an early life amid war. Born into the civil war, he and his mother lived for his first five years in soldier barracks while his father was in the army. He doesn’t remember a lot, but he knows his ability to go out and play, and the family’s ability to leave, was restricted due to the dangers. Eventually, his father went to Ghana to study medicine, and Jackson and his mother would visit him there. His parents are no longer together, but he has spent time living with each.

He said that he would like to pursue his college education in the U.S., and has already visited Otterbein with hopes to going there. In the meantime, he is looking forward to visiting Florida over spring break. (Experiencing his first snow was exciting, but he said the thrill wore off pretty quickly.) And he’s excited about spending time in Washington, D.C., after the school year ends.

“I want to see the White House,” he said.

One Response to “From Liberia to the village”