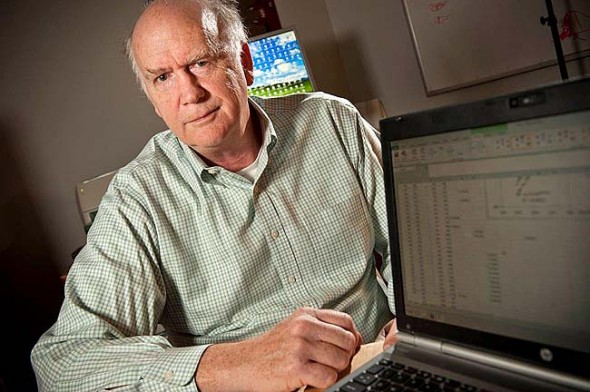 Villager and Wright State University Professor Allen Hunt recently finished his second book, “Networks on Networks: The Physics of Geobiology and Geochemistry.” The book is a collaboration with Stefano Manzoni of Stockholm University. (Submitted Photo)

Seeing soil with a physicist’s eye

Villager Allen Hunt recently added another significant line to his already 14-page résumé. Hunt, a professor of physics and earth and environmental sciences at Wright State University, is coauthor of a new book called “Networks on Networks: The Physics of Geobiology and Geochemistry,” a text that explores soil formation and vegetation growth.

The book is the result of a year’s worth of transatlantic collaboration. Hunt worked with coauthor Stefano Manzoni of Stockholm University in developing mathematical models that predict soil development, water flow and plant growth on a scale ranging from minutes to tens of thousands of years.

The crux of “Networks on Networks” is the relationship between the ways in which water moves through soil and how this movement facilitates or limits plant growth. Soil is not a uniform substance, he said, but an intricate system of pores and particles and the pathways between them.

“If you want to predict the climate effects of the global carbon cycle, you have to understand how rapidly the soil is produced when weathering occurs,” he said.

Hunt has had a long career exploring dirt. He has been at Wright State University since 2004, arriving after a stint as a researcher at the University of Colorado Boulder and program director of hydrological sciences at the National Science Foundation. Hunt has a doctorate degree in theoretical physics so dirt wasn’t necessarily his first love, but it has been a part of his life from a young age. He grew up under the tutelage of a naturalist father who worked at the Grand Canyon, and was interested in the geology, climate and vegetation specific to the unique area in which he grew up.

Hunt discovered physics in college, he said, but as his professional career developed, he found that his research looped him back around to his early interests, ultimately leading him to study the physics of soil and water. He drew connections between disparate disciplines, applying math and physics to study chemical weathering, the process by which soil is formed. Physics is the underlying science of science, Hunt said, and the physics of soil is likewise the physical process beneath larger environmental processes. This area of interest led him to earn a master’s degree in field geomorphology 13 years after he earned his doctorate. His two degrees overlap in the study of flow and transport in porous media, an application that forms the backbone of his new book.

Hunt became invested in the science he and Manzoni specifically investigated in “Networks on Networks” after being invited to write a chapter for the new edition of a groundwater-engineering handbook. A diagram in the book’s previous edition caught Hunt’s eye: it was a useful diagram, elucidating the time spans of various soil processes, but Hunt determined it was not as refined as it could be. There must be some underlying process across different time and length scales, Hunt figured, and so he got to work re-organizing the diagram and exploring what this relationship might be. From there he formulated the hypotheses expounded upon in “Networks on Networks,” proving their viability when his and Manzoni’s mathematical model corresponded to the data amassed by hundreds of previous studies.

Hunt’s soil emphasis is a good complement to Manzoni’s expertise in plant physiology. Hunt joked that their disciplines come together where roots meet the soil, an ideal meeting place for the subject of their book. In fact, their collaboration arose when a colleague recognized that their respective research was addressing different aspects of the same questions. He put the two in contact, and their collaboration ultimately resulted in the publication of “Networks on Networks.”

Hunt said he worked solely on the book for months on end (occasionally to the chagrin of his wife), exchanging up to 20 emails per day with Manzoni, whom he actually hasn’t met in person. Hunt has 116 published papers to his name, and “Networks on Networks” is his second book.
The book was funded in part by the National Science Foundation, and is published by the Institute of Physics. Hunt had previously published with the Institute and was contacted about publishing something new.

The publication of “Networks on Networks” was well-timed, Hunt believes, as the United Nations declared 2015 the “International Year of Soils,” a designation intended in part to “raise full awareness among civil society and decision makers about the profound importance of soil for human life,” according to the United Nations’ website.

The refined understanding of soil physics offered by the book has helped Hunt better understand the areas close to his home. He leads hikes through the Glen, and said that thanks to the research that went into the book, he has been able to bring new information about the area’s plant growth and water cycles to the discussions his gives to Glen Helen naturalists. Hunt and the Glen’s ecologists can use the models in “Networks on Networks” to better predict growth and change in the Glen, as the relationship between soil, elevation and water is “verifiable and predictive” regardless of location. In fact, Hunt said the principles at play in the Glen are the same principles at play at the Grand Canyon, his original geological stomping grounds.

The circuitous academic route he took to arrive at his work in soil science could not have been predicted (perhaps not even with any mathematical formulae), nor could it have been predicted that his work in soil science would result in his new book. But this is the beauty of research, he said — research and academic interests develop organically, propelling scientists forward and diffusing human knowledge like solute through soil’s pore-scale pathways.