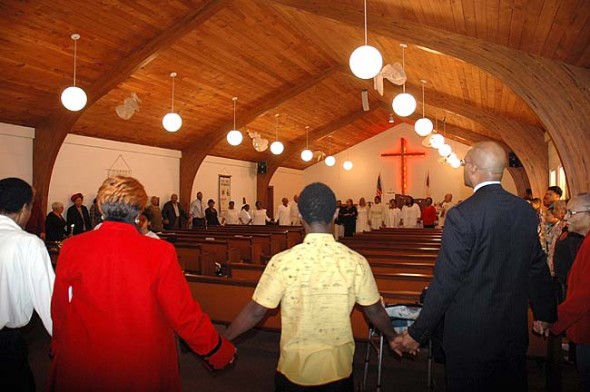 Worshippers at Central Chapel A.M.E. held hands and formed a circle around the perimeter of the church on a recent Sunday. The church is celebrating its 150th anniversary this year. All members of the Yellow Springs community are invited to anniversary events, including an anniversary worship service this Sunday, Feb. 14, at 11 a.m., featuring guest speaker Dr. Michael Brown of Payne Theological Seminary. (Photo by Audrey Hackett)

Worshippers ended a recent Sunday service at Central Chapel A.M.E. by forming a big circle around the perimeter of the church and linking hands. Singing “This little light of mine, I’m gonna let it shine,” people young and old brought their hands up — higher, higher — in praise and proof of the truth that “we are all in one accord,” the theme of that morning’s sermon.

“How do we treat each other?” and “How do we act in community?” were among the questions that Reverend Dwight Smith, Central Chapel’s pastor since last February, asked worshippers to consider.

If longevity supplies part of the answer, Central Chapel is a community of deep and lasting bonds.

“Churches don’t endure ‘just because,’” said member and new trustee Kevin McGruder, a professor of history at Antioch College who has been attending Central Chapel since moving to Yellow Springs in 2013. “It takes work on the part of pastors and lay people.”

This year, Central Chapel is celebrating 150 years of enduring — of surviving and thriving — in the heart of Yellow Springs. Celebrations begin on Sunday, Feb. 14, with an 11 a.m. anniversary worship service, featuring guest pastor Dr. Michael Brown of Payne Theological Seminary. (Feb. 14 is the birthday of Richard Allen, founder of the national A.M.E. church, which is also celebrating a major anniversary this year, its 200th.) Events later in the spring include a Mother’s Day program, Juneteenth program (celebrating the end of slavery), songfest and former pastors as guest speakers. The observance culminates in August with another anniversary worship service on Aug. 28. All members of the Yellow Springs community are welcome to take part.

“What you see is what you get here,” Rev. Smith said in a recent interview. “What I hope you see is a warm, caring community.”

Founding of the church

Go back in time to the fall of 1880, when the Yellow Springs Review, precursor to the News, began publication. On the front page, on the upper left, you’ll see a listing for Sunday services at the “A.M.E. Church” on High Street. And a reference to Bible study on Wednesday evenings (the same night Bible group is held in today’s church).

Central Chapel was already well established by 1880. According to church history, the church was founded in 1866 by a Xenia pastor named Charley Jones, his son and a group of 13 men and women from Yellow Springs. The group first met at Old Central School House off of what’s now Route 370. They soon moved into the village, occupying two different locations in town, then purchased a lot at the corner of S. High and Davis streets and constructed their own chapel.

McGruder is researching the local founders. “I’m trying to get a better picture of them,” he said. He’s been able to locate those early lay members on Ancestry.com and tie them to Yellow Springs. Fleshing out who they were is important, he said, because the laity plays a big role in the A.M.E. church. Pastors are assigned by the conference bishop and are frequently reassigned; it’s rare for an A.M.E. pastor to spend more than a few years at any one church, he explained.

“In a lot of ways, the lay are the church,” said McGruder, who is working to develop an expanded history of Central Chapel, with an emphasis on its early years, in time for the August anniversary celebrations.

A few of the church’s existing families, including the Cordells and Bennings, have roots that go back almost to the founding, he said. And McGruder speculated that the church bought its original lot from an African-American farmer. He would love to identify that individual.

“There was a large black farming community in the area west of High Street,” he noted. “Blacks knew that owning property was critical to independence.”

Soon after the original chapel went up, member Wheeling Gaunt, a Yellow Springs resident of wealth and prominence and a former slave, presented the church with a bell, according to church history. Other alterations and additions were made over the years, and the church expanded its property with the purchase of several additional lots adjacent to the original parcel. In 1972, the current chapel was built (the old chapel was meanwhile taken down, its site now the grassy space fronting Davis Street). A second new structure, the education and family life building, went up in 1998.

Despite such changes, the corner of S. High and Davis streets remains, all these years later, the site of Central Chapel A.M.E. — central in many different ways to Yellow Springs, and the local African-American community.

Don’t call them old. Call them “seasoned.” The phrase is Rev. Smith’s, and it describes a core of longtime, loyal members. One of the most seasoned is Phyllis Jackson, who grew up in Yellow Springs and joined the church in 1943.

“I’ve just always been active in the church,” said Jackson recently, recollecting a time when it was “almost mandatory” for parents to take their children to church. “I’m an every Sunday person,” she added with a chuckle. “I’ve been trained that way and I look forward to it.”

World War II was still on when she joined Central Chapel, and she was part of the “Victorette group,” young women in the church who came together to socialize and raise funds for the war effort. A photo of the group shows 16 crisply dressed young women, many of whom would become, like Jackson, familiar faces and forces within Yellow Springs: Dorothy Allen, Betty Ford, Geneva Gudgel, Maxine Jones and Naomi McKee, among others.

Jackson married and raised two children, worked and retired, vigorously volunteered — and all the while, stayed active in Central Chapel. The church in turn was a mainstay of the African-American community, she said.

“During the early years, the church was the only place that black people could gather on short notice,” she said. “If you had a problem, you could take it to church. Your friends attended and would help you work it out.”

But the church was also a resource to the broader community, she said, a gathering place where people could discuss local and national issues. “It was a place to reach each other, but also reach out to outsiders.”

She’s proud of Central Chapel’s “open door policy,” she added, highlighting how the church housed black students from Prince Edward County, Va., when schools there shut down to avoid integration during the 1960s.

Leanora Brown hasn’t been a member of Central Chapel quite as long as Jackson, but long enough — about 60 years. She and her husband, Orlando, settled in Yellow Springs as a young couple and joined Central Chapel. The church had “mostly older people” then, she recalled in a recent interview. “They were happy to have younger people like us coming in. We swelled the crowd.” Now that she’s one of the elders, she’s likewise pleased to see younger faces in the pews.

Brown, too, is an “every Sunday” person, she said, though in recent years mobility issues sometimes keep her away. Her oldest son, Vernon Brown, a church trustee, brings her to church. She’s been involved in “everything” over the years, from missionary work to Sunday school to the choir.

“I’m not a singer but I enjoyed being in the choir,” she said. Rumors that she knows the words to every song in the hymnal are true, she added. “I’ve heard them all my life.”

Another longtime member, Joe Lewis, began attending with his wife, Frances, in 1963. The couple moved to Yellow Springs when he got a job at Wright-Patterson Air Force Base and raised a family here. Lewis was a church trustee for 40 years, retiring only recently. Trustees oversee everything from the church’s furnaces and central air conditioning to snow removal and landscaping, he explained.

“At one time, we cut the grass ourselves,” he said. “Now we contract for that.”

Keeping the church going has been a source of pride, he said. “Many older churches go out of existence,” he said. “We’ve been able to improve our footprint and go through the century.”

Central Chapel’s staying power was on Jackson’s mind, too. “I’m proud of the fact that it’s still here,” she said.

‘People of faith and hope’

On another recent Sunday, seven members of Central Chapel’s newest youth choir, aged two through teen, performed for the first time. The congregation clapped and cheered and took pictures from the aisle as the youngest singer grabbed the microphone and belted lines from “Oh Happy Day,” a gospel standard.

Young people swarmed the church in earlier years, but changing mores and changing demographics in Yellow Springs have resulted in fewer young members, according to many observers. When Rev. Smith joined as pastor last year, he made increasing youth participation a priority.

“Almost from day one, I started talking about young people,” he said.

The youth choir will be performing every third Sunday, one of several ways Rev. Smith aims to make the church more appealing to young people. He plans to expand the third Sunday concept to include hot breakfasts before church, young leadership during the service and more contemporary, casual worship geared to younger people. Last year, the church organized a back-to-school event in August. It was a success, said Rev. Smith, and Central Chapel plans to do it again this year.

“Now I don’t know if the ‘glory days’ are coming back, but what I’m preaching is that God can bring something different that’s at least as good as the past and maybe better,” he said.

Membership is currently about half its “glory days” figure of 150, and attendance on an average Sunday is around 50 people, he said. Church members are cross-cultural. “Our heritage is African, but we’re open to anyone who’s breathing and wants to learn about the Gospel,” he said.

The African Methodist Episcopal church is the only Christian denomination that didn’t break away over doctrine, according to Rev. Smith, but rather formed in reaction to the discrimination blacks faced in worshipping at majority-white churches in America’s early years. Social justice and “speaking up for those at the margins” is thus part of the A.M.E. bedrock, he said.

In recent years, the local church has organized the village-wide Martin Luther King Jr. march and celebration. Former pastor Rev. John Freeman helped start the march in the 1990s, and still attends every year. “I’m the crazy man in the front of it,” he laughed.

Leading Central Chapel from 1992 to 2007, Rev. Freeman is by far the longest-serving pastor in the church’s history. He now pastors at United A.M.E. Church in Xenia, but considers Central Chapel his “home church.”

“I love the church and I love Yellow Springs,” he said.

Antioch Professor McGruder feels the same way. “It’s such a friendly, welcoming congregation. Once I went there I knew I was going to stay,” he said. McGruder moved to Yellow Springs after 30 years in New York City, where he was an active member of Harlem’s Abyssinian Baptist Church. Central Chapel is very different — much smaller, more intimate — but offers a deeply satisfying sense of community, he said.

McGruder paused and recited the opening lines of “Sweet, Sweet Spirit”: “There’s a sweet, sweet spirit in this place, and I know that it’s the spirit of the Lord.” That song, he said, sums up Central Chapel.

Asked how Central Chapel and the wider A.M.E. church have endured for 150 and 200 years, respectively, Rev. Smith smiled.