I remember reading this book in first or second grade called “Blueberries For Sal.” The basic gist of the story is that a little girl, Sal, and her mother go out to pick blueberries. At the same time, a mother bear and her cub go out looking for whatever it is bears like. Honey? I’m told that bears dig honey. Beets, perhaps? Anyway, somehow Sal and the bear cub end up swapping places and following the wrong moms, who are none the wiser. They spend a while like this, until both moms finally turn around and notice they’ve got the wrong kid, and then they switch back, sweet as you please. 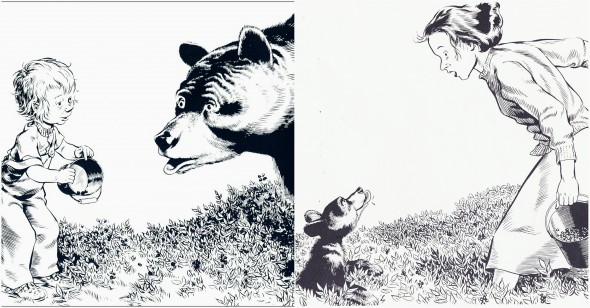 Thus, my conception of bears as creatures for many years was that they are very chill dudes.

Did you guys see “The Revenant?” If I am to believe Leonardo DiCaprio (and he has never given me a reason not to), then it turns out that sometimes bears are not chill.

I grew up in northwest Florida; I want to say that there are no bears in Florida, because it seems absurd to me that bears would hang out there, but it turns out I’m wrong. All I can say is that, personally, I have never had a run-in with a bear. The closest I came was when my family went camping with another family of friends last year in Lake Hope State Park. After camping a few nights, I was told, on the morning of our departure, that our friends, who had arrived a day earlier than us, had woken in the night to find a bear in the camp site. They, along with my husband, had for some reason conspired specifically not to tell me, despite the fact that this was before “The Revenant” even came out and I still had this idea that bears could maybe be reasoned with. Their obvious collective failure at being good friends and partners aside, I was mostly weirded out that a bear was just bippity-boppin’ around in the same general area that I was. Like, bears are kind of a big deal, right? And I almost met one. I kind of felt … famous?

My family was at the Columbus Zoo recently. A couple of brown bears were hanging out in the water, being chill, a fact which, knowing what I now know, made me very suspicious. Meanwhile, I stopped to take a few photos of my daughter, during which time the bears decided to fight each other. This resulted in my favorite triptych of photos of all time: 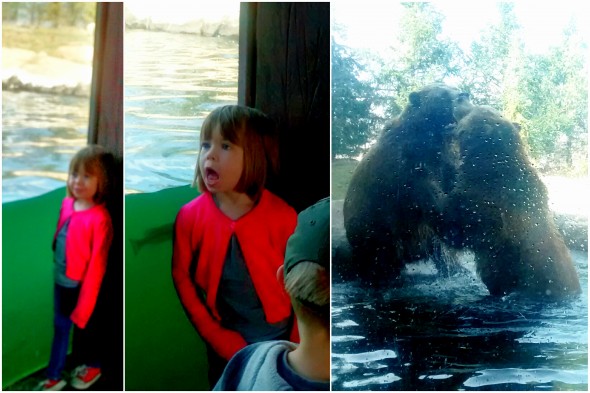 I feel like this is the part of the blog during which I should reveal the bears as some sort of metaphor, or perhaps go into an extended “mama bear” riff about how I’d punch somebody if they badmouthed my kid or something. At the very least, there should be a few bear-related puns. I’m not prepared for anything so thematic or even the least bit piquant; in reality, a few hours ago I read a thread on Reddit about a woman who hiked the Appalachian Trail alone, who said she met a black bear on the way and feared for her life. I sat down to write tonight, and the only thing I could think about was how I’m scared of bears. Not as a symbol of the constant war between man and nature or the mysteries of life and death or, I don’t know, the unknown, but just as bears. Bears are nuts, man. I respect them for that, but it’s pretty dang scary.

Despite this fact, I’m still going to the Smoky Mountains with my family this summer, where there are bears. It’ll be fun. And I don’t want my friends and husband, who are so stupidly not afraid of bears (seriously, guys, did you not see “The Revenant”?) to think I’m a giant baby. Because babies, giant or otherwise, do not identify their fears and then literally set up camp in the middle of them.

So I’ll read the literature on the Great Smoky Mountains National Park website about how to keep your head down and not bother the bears. I’ll keep my “pic-a-nic basket” put away. If I happen to run across a black bear, I will back away slowly and put distance between myself and the bear, speaking in, as the Department of Fish and Wildlife suggests, a “calm and assertive voice,” a choice of words that is amusing to me. Most importantly, I will not let my kid wander off when we inevitably go berry-picking. That’s just poor parenting, for both humans and bears.