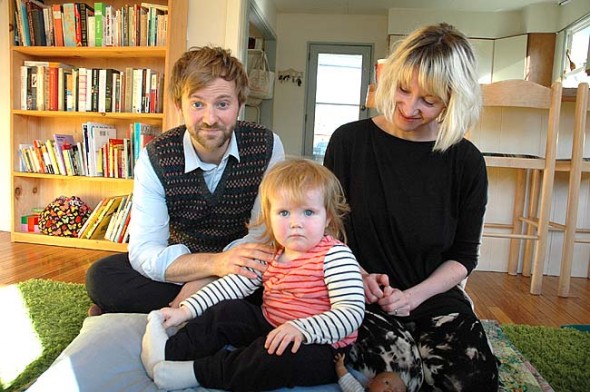 Poets Christopher DeWeese and Heather Christle moved to the village in 2013 after DeWeese accepted a teaching job at Wright State. Here, they play with their daughter, Harriet, who was born in Yellow Springs in 2014 and is already a regular at the Emporium, Sunrise Café and the public library. (Photo by Audrey Hackett)

Finding room to write, and grow in Yellow Springs

WHY YS?
This is the fourth article in an occasional series looking at why people choose to
live in Yellow Springs.

Poets Heather Christle and Christopher DeWeese are new to Yellow Springs, but their daughter, Harriet, is a hometown girl. Harriet was born just about a year after the couple’s 2013 move to the village. At 20 months, she’s already a regular at the Emporium and the John Bryan Community Center playground. She dines at Sunrise Café and drools over her future reading choices at the public library. It’s too early to tell whether she’ll become a poet like her parents. Right now, she favors polka dots and dancing, and frequently wears one while doing the other.

On a recent Saturday afternoon, the family was arrayed on the green rug they call “grass” in the living room of their north Yellow Springs home. Eyes closed, swaying in circles to soft, melodic music, Harriet was dancing — and, disturbingly, wearing stripes.

“No dots today?” this reporter asked. Her dad lifted up her striped shirt to reveal a second shirt, dense with dots, underneath. Harriet grinned.

“She could dance all day,” DeWeese said, noting that her taste ran to punk and high-energy dance music.

Christle, a New Hampshire native, and DeWeese, who hails from Port Townsend, Wash., didn’t figure on ending up in the Midwest, though DeWeese attended Oberlin College in northern Ohio. They met in graduate school, at the University of Massachusetts, Amherst, where each earned a Master of Fine Arts in poetry. They moved to Atlanta to teach for a couple of years, then returned to Massachusetts, living in the town of Northampton. In the winter of 2013, DeWeese was offered a tenure-track position at Wright State. His future colleagues drove him around several area towns on a January day to scope out neighborhoods.

“Yellow Springs was the only place where people were walking around,” said DeWeese. “That really made an impression on me.”

He took the job, and the couple rented a house on Park Place they’d seen only in pictures. It’s a sweet house with a bright front room (where the “grass” grows) and a high-ceilinged addition in the back.

Extra space for stacking up thoughts might be useful for the poets. Both in their mid-thirties, she’s published four poetry collections, he two, and each has more projects in the works. DeWeese’s latest collection, published last August, is called “The Father of the Arrow Is the Thought,” and explores the relationship between physical reality and the imagination. The book draws on Swiss painter Paul Klee’s “far-reaching ideas about art,” DeWeese explained. “I got kind of obsessed with it,” he added.

Each poem bears the title of a natural feature (“The River,” “The Forest,” “The Harbor”), many drawing on the landscape of his upbringing on the Olympic Peninsula. One poem that didn’t make the cut was “The Glen,” which DeWeese described in an interview last year with Bucknell University’s West Branch Wired (an online journal) as “900 acres or so of dense, strange woods and streams and birds and deer and teenagers who are quite obviously on drugs.” DeWeese said he writes “from imagination and my own experience.”

Christle’s latest book, published last March, is titled “Heliopause,” the name for the boundary between the sun’s furthest reach and deep space. Many of the poems were composed amid reports from Voyager I as it neared, then crossed that border, she said. Boundary-crossing and the indeterminacy of what lies beyond a given boundary are themes that run through all the poems in the book, a focus she sensed but didn’t plan. She writes by hand, she said, and doesn’t make decisions before writing.

One section of the book, “Dear Seth,” was written during her first winter in Yellow Springs. It contains poems that ache for a friend left behind in Massachusetts and report on Christle’s new life in the Midwest. One begins: “It’s snowing again lightly in Ohio / like it had an idea and thought / There’s no harm / in trying it out / before growing distracted / by some town I cannot see.” In another poem, Christle writes of her fraught wait, during pregnancy, for the newest of new life: “There is fear the baby / when it arrives will be wrongly / or poorly loved / that the world is no place / for helpless things.”

Asked how living in Yellow Springs has informed their art, Christle and DeWeese said neither project they’re working on now is explicitly tied to their change in residence. Her project, a departure from poetry, is a research-driven book on crying; his is a long-term poetry project on alternative music, probing memory and nostalgia connected with the grunge scene of his youth. But Christle said her book on crying has been “definitely shaped” by the police killing of John Crawford in 2014. She took part in the Black Lives Matter vigils in Xenia (“where almost everyone was from Yellow Springs”) and in local conversations on the killing and similar shootings nationwide.

“No matter where we had been living, it would have been impossible not to be thinking about the murders of young African-American people,” she said. But the proximity of Crawford’s killing, and her involvement in the local response to it, gave her research into crying and representations of grief “a feeling of urgency.”

Reflecting on the character of Yellow Springs, DeWeese observed that villagers blend activism with another trait: fierce enthusiasm for their town.

“People love it here,” he said.

Christle said her childhood in Wolfeboro, N.H., another small town that draws tourists, equipped her with “an ingrained habit of looking to see if people are from out of town.” Her trick for doing so in Yellow Springs is to spot “people dressed up in tie-dye who might not” — she paused delicately — “necessarily wear tie-dye all the time.”

DeWeese said he’s enjoying teaching at Wright State; he’s up for tenure next year, and if all goes well, the family plans to put down roots in Yellow Springs. Christle has meanwhile held a variety of teaching posts. She taught poetry at Antioch College during their first summer in the village. Last fall, she was a visiting poet at the University of Texas at Austin, and she and Harriet spent the semester there. And this spring, Christle is the Dixon professor of creative writing at Wittenberg University in Springfield.

“I live here; I am beginning to believe that,” Christle said in an interview last year with the Black Warrior Review, a literary journal. “We’ve been in a bit of a ‘baby bunker,’” she said a few weeks ago, explaining the slow dawning of the feeling that Yellow Springs is home. One serious reservation involves Ohioans’ lax attitude toward snow removal — a moral and practical imperative in her native New England. “We’re snobs about snow,” she said.

Home is elusive, but not, it seems, to Harriet. Toward the end of the interview, she tried out a somersault, her first, nearly nailing it. She’s learning to put on her own coat, and that afternoon she stretched her arms into its blue sleeves (the coat was upside down) in a bid to head outside to the bright and spring-like February afternoon.

“This is such a warm place for kids to grow up,” DeWeese reflected. “It’s safe but not dull.” He corrected himself. “Harriet will think it’s dull, but doesn’t everybody have to think that about the place they’re from?”