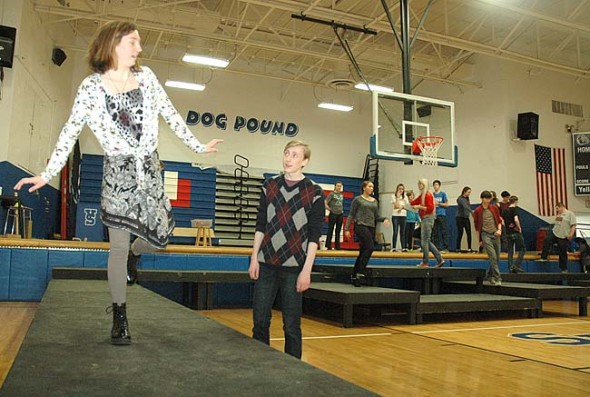 The YSHS musical, "Footloose," will be performed on Thursday, March 10, at 8 p.m. in the Mills Lawn gym rather than Friday, March 11, as originally scheduled. The schedule change is in support of the YSHS basketball team, which will play in the Division IV finals on Friday at 8 p.m. Shown above are Charlotte Walkey and Lucas Mulhall during rehearsals.

The producers of “Footloose,” the Yellow Springs High School musical, have changed the play’s performance schedule so as not to conflict with the YSHS Bulldogs basketball team’s appearance in the Division IV regional finals. The Bulldogs will play at 8 p.m. (not 7 p.m. as originally reported) on Friday, March 11 at the Fairmont Trent Arena in Kettering.

In an effort to support the Bulldogs, “Footloose” will not be performed as scheduled on Friday, March 11, and will instead be presented Thursday, March 10, at 8 p.m. at the Mills Lawn gym. The play’s Saturday and Sunday schedule will be as originally scheduled, with a performance at 8 p.m. Saturday, March 12, and 2 p.m. on Sunday, March 13.

Check the YS News website, https://www.ysnews.com, on Saturday, March 12, for a report on the outcome of Friday’s game.