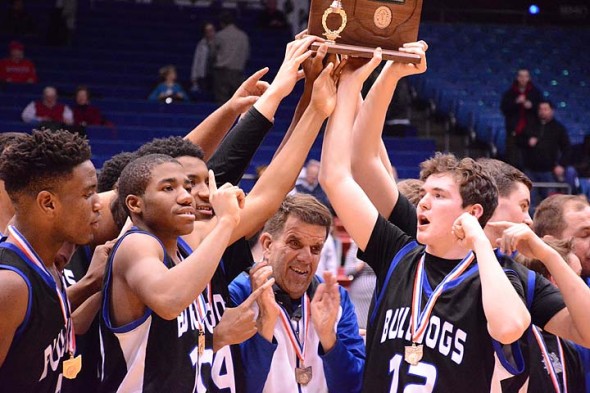 The Bulldog boys’ basketball team exulted over their decisive win (66–24) against Middletown Christian last week in the last game of the District IV finals. From left, Joe Plumer, Devon Perry, Team Manager Stewart Miller and Ethan Dewine held up the championship plaque. On Tuesday, March 8, the brand-new District IV Champs won the semi-final game against Lima Perry in the regional tournament and they go on to the regional finals this Friday, March 11, at 7 p.m. at the Fairmont Trent Arena. See page 12 and visit ysnews.com for details and more photos of the games. (Photo by Daniel Deaton)

Note the Bulldogs’ next tournament game will be held at 8 p.m., Friday, March 11, at the Jackson Center at Fairmont’s Trent Arena. The Friday performance for YSHS’s “Footloose” has been moved to Thursday, March 10, at 8 p.m. at Mills Lawn School.

Thursday, March 3, proved to be a glorious day for the Yellow Springs Bulldogs, as they patently and unrepentantly squashed Middletown Christian in the last game of the District IV finals. The final score was an impressive 66–24, and the victory propelled the team to the District IV regional tournament. The Bulldogs’ win was the first time since the 2003–2004 season that the local team took the district title.

In February, the two teams had met in an even match-up, resulting in a triple overtime game. But the March 3 game was anything but an even match. While Middletown Christian held a brief 3-2 lead at the beginning, Yellow Springs took the lead, 17–3, early in the second quarter.

The victory is the direct result of the team’s hard work and the players’ enthusiasm for doing it. Coach Steve Grasso said the team attended 8 a.m. practices during the summer, went to camps in Dayton and at OSU, and rearranged work schedules so as to not miss practice. Grasso said the team is “blessed to a certain degree,” but that they really put in a tremendous amount of work.

This season was Grasso’s third year as the Bulldogs’ head coach and resembles the completion of a sort of coaching circle. Grasso was previously an assistant coach at Fairmont High School under the tutelage of head coach Hank Bias. Bias’s first job was at Yellow Springs, and the team made it to state under his command. Grasso had the opportunity to stay at Fairmont, but he was encouraged by Bias to go for the head coach job in Yellow Springs, who thought he had what it took to be a successful coach. Lo and behold, the team is now on its way to state, and their first game will take place at Fairmont High School.

Grasso said he has coached all levels of basketball for six years preceding his arrival at Yellow Springs, and so he too understands the rewards that come from putting in one’s time. His new position is certainly a step up, he said, but is totally built on his previous experience.

Winning teams are notoriously superstitious, but Grasso said that the team, while working hard, has taken a relaxed approach to their progress.

“Too much focus on preparations leads to too much nervousness,” he said. “We are keeping it loose.”

He noted that previous state champs Tri-Village came to their game in shirts and ties, a classy move but one that bespeaks a certain sense of propriety, possibly at the expense of feeling natural. Yellow Springs, on the other hand, came in throwback jerseys. It put the team in the right frame of mind, Grasso said, one that bespeaks a respect for what they’re doing but allows the personality of the team and the players to shine through.

Grasso also made sure that the News note the contribution of Assistant Coach Bob Crawford, who has scheduled workouts, organized video screenings, and has “helped the kids grow individually.”

The Bulldogs’ first District IV regional tournament game was held on Tuesday, Mar. 8, in which they beat Lima Perry, 61–43, at the Jackson Center at Fairmont’s Trent Arena. They advance to the finals this Friday, March 11, at 8 p.m. at the same venue. Visit the Yellow Springs News website for details, updates and photos.