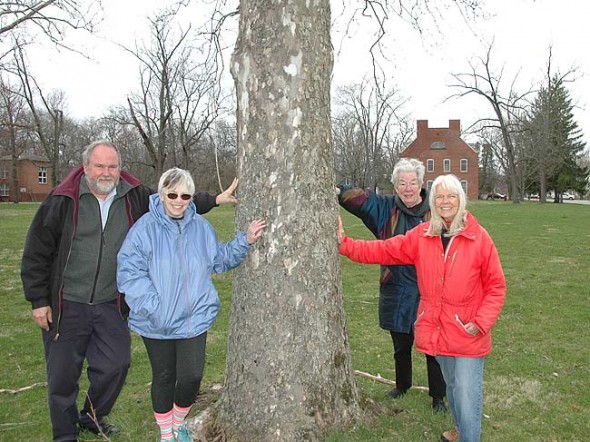 The Antioch Eco-Village Pioneers, a local cohousing group, claims 14 core members who are working to create a cohousing community (private homes with shared amenities) on the Antioch campus as part of the college’s intergenerational housing concept. Here, pictured on one proposed site, at the corner of N. College and Livermore streets, are four members of the group: Don Hollister, Pat Brown, Jane Baker and Sylvia Carter Denny. (Photo by Audrey Hackett)

The Antioch Eco-Village Pioneers includes a farmer, social worker, travel tour director and journalist, as well as people skilled in carpentry, music, graphic design and older adult fitness. It’s a mix of women and men active in Glen Helen, the Yellow Springs Arts Council and the library, and passionate about reading, writing, theater, food, travel, swimming, diversity and spirituality, among a host of other interests. One has a master’s in creative writing, another a master’s in social work. One member is certified as a master gardener, another as a grief counselor. And while the age range tilts older (most members are in their sixties through eighties), the group includes one family with children — and is actively seeking new members of all ages to explore options for creating a cohousing community on the Antioch campus.

“We want to be intergenerational,” said Pat Brown, one of the group’s 14 core members, in a recent interview. “We need diversity from the beginning, and so we’re hoping families and younger couples will join us. We need their vitality and ideas.”

To that end, the Eco-Village Pioneers are organizing an event on Sunday, May 1, from 2 to 4 p.m. at the Senior Center for all villagers curious about cohousing and interested in learning about Yellow Springs’ cohousing group, which does not yet live in a cohousing community, but seeks to establish one on the Antioch campus as part of the college’s planned intergenerational housing development.

Cohousing is “an intentional community of private homes clustered around shared space,” according to the website of the Cohousing Association of the United States. The website lists 161 established cohousing communities around the country, as well as 123 that are in the process of forming. The Cohousing Association does not identify any active communities in Ohio, although it lists two, in Akron and Granville, as forming/reforming.

Many members of the local group have long been fascinated by cohousing, and have considerable knowledge and expertise on the social and environmental benefits of these communities and the various forms they can take. Some have visited cohousing communities; one member, Pat Gaskin, who is not currently active but plans to address interested villagers at the May meeting, lived in a cohousing community for many years.

“I’ve been reading about it since the 1970s,” said Jane Baker, another member. “It’s just always been interesting to me.”

The Eco-Village Pioneers got their start last spring, in tandem with Antioch College’s charrette, or public planning meeting, devoted to the concept of intergenerational housing on campus. Though the proposed Antioch College Village is a wider vision of on-campus residential community, it includes cohousing as one component, and shares the cohousing group’s commitment to ecologically sustainable and socially enriching living.

“Many of us went to the charrette, and from there we began to roll,” said cohousing group member Pat Stempfly. “We’re a wonderful group that’s building community together.”

The group has been meeting at least monthly, and has picked up a few new members since the charrette, in addition to deepening relationships among the core members. It has researched cohousing governance, and is inclining toward sociocracy, also called dynamic governance, a form of consent-based decision-making structured around committees.

“Everyone gets a vote and a voice,” said Stempfly, who is chair of the Community Life committee.

Cohousing communities around the country (and world) strike different balances between private and communal living, according to Brown and others. Brown said the local group envisions individual living spaces — likely a mix of houses and apartments that could be purchased or rented — complemented by indoor and outdoor common spaces. Indoor spaces could include a kitchen, laundry, meeting or community room and office; outdoor spaces could include a garden and composting and picnic areas.

A cohousing community is not a condominium association, which may also have shared amenities, said member Don Hollister, development director at Community Solutions. Its commitment to community goes deeper. The local cohousing group is collaboratively planning its common spaces “with the intent of ongoing social interaction — things like common meals,” he said. Unlike many suburban developments, the whole point of cohousing is to “see your neighbors,” he emphasized.

Environmental stewardship is another key aspect. Most older members of the group envision cohousing as a form of downsizing. “Everyone wants to live in a smaller footprint,” said Brown. In Stempfly’s view, “We’re not going to be able to sustain the planet living the way we do. Cohousing is about living more sustainably … with thought for future generations.”

As the group seeks new and diverse members, it also hopes to open the concept to people from different income levels. According to Brown, the group is in conversation with Home, Inc., about ways to incorporate an affordable housing component into the community’s plans.

And, for most of the group, locating their cohousing community on the Antioch campus and being part — perhaps a leading part — of the college’s intergenerational housing development is an important aspect of the vision.

“I think Antioch would be a wonderful place to do a pilot because the college is reviving itself,” said Stempfly. “The opportunity to live on campus is very appealing — there’s that mix of young and old, the energy of youth and the wisdom of the old.” Stempfly, like other members, expressed interest in volunteering on campus; she has a particular passion for mentoring, she said.

“We’d like to be a part of the college. The infrastructure is there, and we know that what they build is going to be quality,” said Brown. “The location is ideal,” added Baker.

Former Antioch president Mark Roosevelt was a champion of the intergenerational housing concept and saw cohousing as an element of it, according to Brown, who met with him on the subject even before the cohousing group formed. Roosevelt said in an interview last year that he believed the concept would appeal to Baby Boomers who are ready to downsize but not yet ready “to be put out to pasture.”

“These are people who don’t want to be isolated, who want to be valued for their knowledge, who want demands made of them,” he said in the previous interview. “I believe it’s a generational yearning.”

The new president, Tom Manley, signaled his strong support for the College Village as a way to raise revenue for Antioch — and carry out its commitment to finding “new and better ways of living,” he said.

“We’ve got to get it off the drawing board and into a more active phase of development,” he told the News in a recent interview.

Around the same time as Manley’s comments, Antioch’s board of trustees took a step toward that more active phase. According to Andi Adkins, vice president for finance and operations, the board affirmed its commitment to the College Village and the local cohousing group “as part of that project.” The board also announced the “first bit of funding” for the project, in the amount of $20,000, from a source Adkins declined to identify. That funding will be used to pay consultant Sandy Wiggins, who oversaw the charrette, to research and identify funding options for the project’s first phase, which is estimated to cost $2.2 million and will unfold over at least two years. The first phase will establish the legal structures, zoning and licensing and fee requirements that must be in place, Adkins said, “before we break ground.” The college is targeting “a little over 300 units” in the project’s current scope, she added.

The Eco-Village Pioneers acknowledged that there’s some “nitty gritty” — not to mention major financial hurdles — to overcome before their concept of living in a close, ecologically sustainable community becomes a reality. But they believe their activities of the past year have laid the foundation for that community.

“We’re not yet living in cohousing, but we’re already building community by caring for each other,” said Stempfly.

Other members agreed. Brown said she’s been “blessed to meet some wonderful people,” while Baker, a longtime villager, added, “It’s been interesting to get to know a whole new group of people.”

At the same time, members “don’t want to live in a community that’s just elderly,” said Brown, who believes that younger people and families also have much to gain from cohousing.

“As a society, we’ve become so isolated from each other. Cohousing offers younger people and older people the chance to learn from and lean on each other. It’s a chance to be connected to more than just your family, and to find the support you need,” said Brown.

Hollister sees cohousing as congruent with the “new urbanism” concept, which emphasizes the value — for collective and individual well-being — of “unplanned interactions” with neighbors.

For Stempfly, the benefits of cohousing are holistic. “It’s an opportunity to plant some visionary seeds to live in a community and care for the earth and each other,” she said. Given the time and money the project will likely require, fruition may be years away. But Stempfly was upbeat.