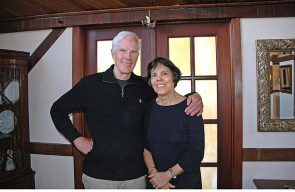 Hap and Sonia Cawood moved to Yellow Springs in 1973 when their two daughters were young. They came for the schools, the robust community life and because Hap fell in love with the renovated barn they call home in the center of town. They stay because village life continues to fulfill and sustain them. (Photo by Carol Simmons)

For 43 years, living where it’s lively

WHY YS?
This is the sixth article in an occasional series looking at why people choose to live in Yellow Springs. If you have a story that fits our theme, feel free to contact us at ysnews@ysnews.com.

Albert “Hap” and Sonia Cawood moved into a renovated barn in the heart of Yellow Spring in 1973, and they have made their home there all the years since.

They might have stayed in Dayton, where Hap was the award-winning and longtime editorial page editor of the Dayton Daily News. They might have settled in the city’s south suburbs and sent their two daughters to school there. Or they might, after Hap’s retirement in 2000, returned to Kentucky, the state they still think of as home, where Hap grew up in the Appalachian city of Harlan and where Sonia moved to Lexington from her native Mexico at the age of 13.

But they chose Yellow Springs, and their “Why Yellow Springs?” story is actually two-fold -— why they came, as well as why they’ve stayed.

Sitting recently in their comfortable living room, Sonia spoke with a tone of incredulity as she reflected on how the then-young family ended up here. She sounded as though she still couldn’t believe that Hap walked into the former barn they now call home and declared, “I’ll take it,” without talking over the purchase — and the move that would accompany it — with her first. Not that they hadn’t discussed leaving their Dayton neighborhood, where some recent break-ins had caused them concern. What’s more, as their two daughters approached school age, Hap in particular had wanted them to have an educational experience similar to his own in a small, community-based school system. The diversity within Yellow Springs and its schools was also a draw. But the speed with which the deal was cinched took Sonia by more than surprise. “I about had a heart attack,” she said.

Hap said he was taken by surprise as well. He only looked at the property after his interest in barn-turned-home living was piqued by an acquaintance, and he didn’t anticipate taking any particular action. Nevertheless, the normally measured man whose journalism career was built on weighing multiple sides of a question said that as soon as he went inside he knew.

Turned out if he had waited to act, they likely wouldn’t have gotten the home, Sonia noted. Another couple also were interested and scheduled to see the house the next day. Fate seemed to have found in the Cawoods’ favor, and any nagging doubts they had evaporated as everything fell into place.

Their sense of rightness was affirmed soon after. Walking to Miami Bank downtown to sign mortgage papers, they passed a young man — “probably a college student,” Hap recalled — who was dressed as Peter Pan. “No one stared or batted an eye,” he noted. A little bit further on, Sonia continued, they passed a young woman dressed like Mary Poppins, “with the coat and button shoes. … And again no one batted an eye,” she said. “Then when we got to the bank, two men came out wearing suits and ties and everybody stared.” The couple laughed at the memory.

He said he responded happily to the individuality that seemed to be cultivated and welcomed here. He also enjoyed a professional camaraderie with Dayton Daily News colleagues who lived in the village in the 1970s and early ’80s. “The Yellow Springs Mafia” is what some critical Dayton-area letter writers called the editorial page columnists and editors who made their homes here at that time.

The village also provided a wonderfully rich environment in which to raise their daughters. The elder, Romy, was six years old and going into first grade, while Shuly was nearly four when the Cawoods moved to town. Both girls are now married and pursuing careers in other states — Romy is a psychologist in Charlotte, N.C., and Shuly is a writer in Johnson City, Tenn. But both return home for frequent visits. Shuly often attends the Antioch Writers Workshop, noted her mother.

With a house in the center of town, “this was a gathering place for them and their friends” as they were growing up, Sonia added. The parents liked that they could see the children walking home from Mills Lawn School, less than a block away, and Sonia quickly became involved in school activities. Hap, too, enjoyed becoming a part of the school community.

Sonia and Hap both praised Yellow Springs schools. The music program with Shirley Mullins is a standout in their memories and an example of the opportunities for growth and development their daughters experienced. “Here, the system was so inclusive,” Hap said.

The Cawoods continue to take delight in living in Yellow Springs. They love the short walk downtown, and they love that the downtown is alive with activity. “There’s a sense of life here,” Hap said, while the downtowns of so many other small towns “are denuded, destroyed. You see empty stores. … They’re lonely.” The couple appreciates not only the availability of a grocery, a hardware store and a pharmacy, but also the individual attention and familiarity they find. Tom’s deli fills special requests; Current Cuisine catered their daughters’ weddings. The Wellness Center at Antioch College has become a frequent destination — at least four times a week. “That’s a huge plus for us,” Sonia said.

Retired life has remained an active time for the couple. They travel, host visitors — including a recent reunion of Hap’s kindergarten class. Hap continues to write freelance for the Engineers Club in Dayton, and he published a novel, “The Miler,” in 2005.

As a career journalist and former editorial writer, Hap said he appreciates and feels at home in an environment where ideas are debated and discussed, “where big issues are important” to his neighbors, as they are to him. While still working at the newspaper, he said he noted that Yellow Springs residents, more than those of any other community in the region, invariably responded to local, state and national issues with a level of passion, engagement and knowledge he found “remarkable.”

There was — and is — “an intellectual vigor” in Yellow Springs that the Cawoods relish. “Then you have the flaky people who add a nice seasoning,” Sonia added.