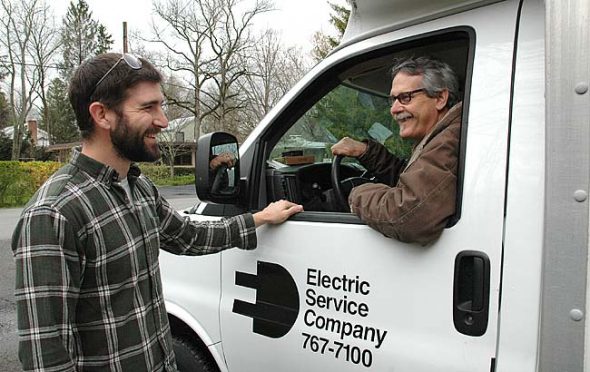 Paul Larkowski, left, shared a laugh with longtime village electrician Larry Gerthoffer, better known as Larry Electric. Gerthoffer has been wiring village homes and businesses for over 40 years. Larkowski, who is working toward his contractor’s license under Gerthoffer, hopes to continue his mentor’s ‘lectric legacy in Yellow Springs. (Photo by Audrey Hackett)

Larry Gerthoffer, better known as Larry Electric, has been a “fixture” of Yellow Springs for more than 40 years. Known equally for his wry sense of humor and his way with wiring, he’s been plying both trades in the village since starting his electric service business here in 1975.

He is, as far as he knows, the only independent licensed electrician in Yellow Springs. Certainly, his white van with its crisp black logo — a stylized electrical plug designed by Bob Bingenheimer, the founder of Bing Design — is ubiquitous on village streets. And according to local rumor, he’s been inside every house in town. Gerthoffer downplayed that claim in a recent interview, saying the reality was more like “20 to 25 percent” of village homes.

“But I’ve been on every block in Yellow Springs,” he said.

Gerthoffer grew up in southwestern Pennsylvania, in the small town of Latrobe, “home of Rolling Rock.” He’s always been a “take it apart kind of guy,” he said. “I wired my first three-way switch when I was six years old,” after receiving an electric kit for Christmas. Three-way switches — the kind that operate a light from two locations — are not that complicated, he said, but they are known among electricians for “separating the electrics from the non-electrics.”

He got his technical training at Williamsport Community College in central Pennsylvania. One of his early jobs was wiring a post office in a “little coal town in the hills.” He arrived in Yellow Springs in the summer of ’74, just shy of his 24th birthday. He was drawn here by friends.

“My cadre came out here to work for HUD [Department of Housing and Urban Development] after the Xenia tornado disaster,” he said. “I followed suit.” He also had friends at the Dayton Art Institute, which had strong ties to Yellow Springs in those days.

He spent his first night in Yellow Springs in a house on North Winter Street — the street where he now lives — and soon established himself at a local “flophouse” on Walnut Street that was known as the “Crepe Paper House” (resident hippies adorned it with streamers).

“You could send a letter through the post office addressed to ‘Crepe Paper House, Yellow Springs,’” and it would be delivered, Gerthoffer remembers. “Those were more relaxed times.”

He initially worked off his rent by doing electrical work at another since-faded village institution, Com’s Tavern on West Davis Street, owned at that time by Don Kepler. But by the fall of 1975, he was ready to start his own business. He opened a bank account, bought a truck and “slowly worked [the business] up into a growing concern.”

His early residential clients were some of the town’s leading lights. He remembers with fondness Perino Wingfield, Lester Sontag, Perry Stewart and Dick and Jean DeWine, among many others. Wingfield gave him life perspective, while Sontag imparted investment advice and Stewart connected him to the Yellow Springs Community Foundation, where Gerthoffer served as treasurer for 10 years in the ’80s and ’90s. And the -DeWines were “stellar, wonderful people,” he said.

“Many of my early clients are dead now,” he reflected. “That’s how long I’ve been here.”

Gerthoffer has done plenty of commercial work in town, too, including major and minor renovations on the Antioch campus and renovations of Yellow Springs Federal Credit Union, Peach’s and The Winds Cafe. About 90 percent of his work is in the village.

He was lucky to have good mentors. Gene Birch, former electrical inspector for the village, and Harold “Zip” Hamilton, longtime supervisor of public works, were “very instrumental in recognizing my talent and recommending me for jobs,” he said. Ralph Snyder taught him refrigeration and air conditioning, the sales and service of which became another aspect of his business.

Early on, he did lighting work for several Antioch theater productions. Local thespian Leon Holster dubbed him Larry ’Lectric, and the name stuck. Gerthoffer said he associated with a lot of “creative types” in those days, always as “the odd man out.” He remains a theater and visual arts lover and a supporter, “like many in this town,” he said, of local arts organizations.

“I’m a patron of the arts. Not a wealthy patron,” he clarified.

He’s also been civically active over the years. In addition to his long tenure at the Community Foundation, he was on the Village Planning Commission “for about 15 minutes,” he joked, and served a term on the Energy Board. But his deepest engagment seems to be with individual clients — and the dozens of local residents he’s hired and mentored since the 1970s.

Springfield resident and country fiddler Linda Scutt — Gerthoffer calls her “Linda Lou” — is one. She worked with Larry Electric for a year and a half “in the late ’70s or early ’80s,” she said recently. A server at The Winds then, she was “just interested” in trying out the trade. Scutt said she learned a lot, including how tight and “funky” some of Yellow Springs’ crawl spaces are. “You had to squirm to get through,” she recalled. And she learned to admire Gerthoffer’s skill.

“Larry is a master mechanical person,” she said. “He could figure anything out.” And he was serious on the job. “Larry’s very diligent about getting the job done. He’s fun but on task.”

These days, Larry Electric is a two-man team. In October of 2013, Gerthoffer brought on Paul Larkowski, a 32-year-old musician and apprentice electrician working toward his contractor’s license, which in Ohio requires 5,000 hours, or about four years, under a master electrician. Larkowski grew up in Fairborn, moved to Boston to play music (experimental jazz-influenced rock), served for a year in AmeriCorps, then returned to Ohio a few years ago to start a family with his girlfriend, Katy Heaney. They live in the village and have one child, with another due any day.

Gerthoffer also trained his son, Evan, 26, most of the way toward a license. Evan now lives in Washington state, where he does electrical work. Gerthoffer also raised a daughter in the village, Lydia, 29, who lives with her family in Brooklyn.

When Gerthoffer is ready to retire — he’s not quite there yet — he plans to hand over the business to Larkowski.

“When Larry gets too old and crotchety, he’ll give it to me,” the younger man said recently, with a sidelong glance at his mentor.

Larkowski grew serious. “I’m all about it,” he said. “It’s an amazing opportunity. This town has a ton of contractors, and several that are good, but I can’t think of another electrician to call. Everyone says, ‘Call Larry Electric.’”

For over 40 years, people have. He’s been involved in wiring several passive homes in town, a newer challenge that reflects his longstanding interest in energy efficiency.

He’s interested in “low-carbon cooling,” and recently received certification from LG, a manufacturer of energy-efficient heating and cooling systems. And while he clearly values his technical skills — annually earning more continuing education credits than state licensing requires — he believes interpersonal skills are just as critical to a contractor’s success.

“You have to have the proper personality to succeed in this business,” he said. “You have to like people, and you have to be good at communicating.”

He and Larkowski have an easy rapport, and a sharp but ultimately warm repartee.

“I like how Larry does things,” Larkowski said. “He’s very detail oriented; he takes pride in what we’re doing.” He paused.

“He’s up my butt about every tiny thing,” Larkowski said, laughing.

The two men spoke with the News over lunch, and once the soup and bread were gone, Gerthoffer rose from his chair and glanced at his phone.

Just then a voice called out, “Hey, Larry …” And Larry Electric walked two tables over, hand raised in greeting, set to wire in another human connection.

NOTE: This article has been revised from the print to correctly identify the occupation of Larry Gerthoffer’s son, Evan.