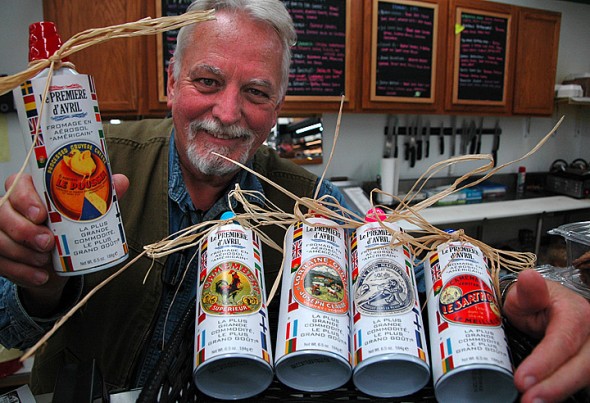 These days, a small town of 3,500 could consider itself lucky just to have a place that sells milk and eggs. So the feisty, cosmopolitan town of Yellow Springs could view itself extraordinarily fortunate to harbor a store that strives to cater to its demanding, world-wise palate.

But deep down, Yellow Springers are still, well, midwesterners. And no one knows this better than Tom Gray, owner of that eponymous epicurean establishment, Tom’s.

While Gray has seen to it that villagers can choose from 16 different types of olives, organic vegetables and raw juices, he still gets the furtive, yet not-so-infrequent requests for pop-top weenies-in-a-can and tropical red punch.

The aerosol cheeses are the brainchild of AliGaz, a Franco-American food company which sees a market in a new generation of consumers who were raised by yuppies and have developed a taste for the finer things in life, yet who tend to push back against their entitled upbringing by “ironically liking” classic American convenience products such as brightly colored spray cheese.

“Currently, AliGaz offers only a handful of aerosol cheeses,” Gray said. “Camembert, creamy lorraine, gruyère, and a traditional Roquefort — though that last one is not really ready for prime time yet,” he adds.

Gray explains that while the tangy cheese would likely be a high-demand item, the crumbly texture doesn’t fare well when forced through a narrow nozzle at high pressure.

“And the Swiss-type cheeses don’t work well at all in a pressurized environment.” he says. Apparently, whenever a hole makes its way to the nozzle, the excess loss of gas results in undue depletion of the propellant, which results in “as much as a third of the product remaining in the can.”

“[The company] is aware of the problem,” Gray said. “They realize Swiss is very popular, but they also can’t afford the risk of customers sustaining injury when attempting to cut open the can to get at the remaining cheese.”

The same goes for cheeses which are usually eaten warm. “Aerosol cans and heat just don’t mix,” says Gray, “and that means no brie.”

Le Première d’Avril Artisan Aerosol Cheeses will initially be stocked in the deli with the bulk cheeses, but will eventually be located with other pre-packaged cheeses and dairy items. “Just look for the raffia; no other spray cheese has that,” Gray said. 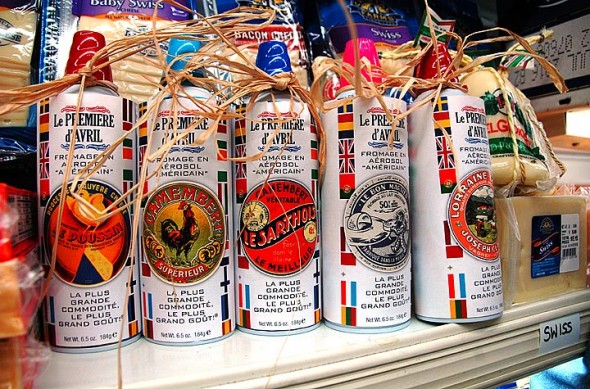 Le Premiere d’Avril brand aerosol French cheeses will be available with other pre-packaged cheeses after their initial introduction in the deli.