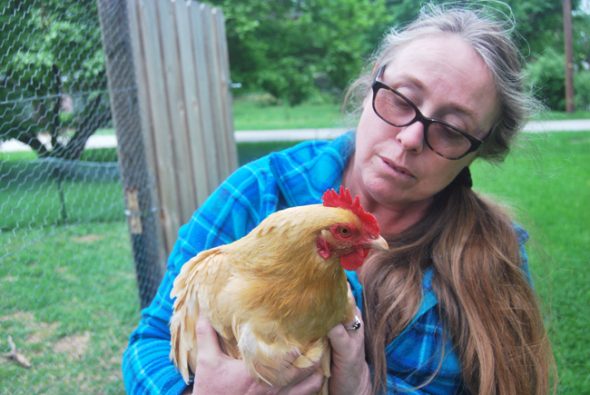 Trish Russell poses with one of her "ladies", a hen she has raised for eggs in a backyard coop in Yellow Springs. (Photo by Aaron Zaremsky)

There are many worlds in Yellow Springs. A small but growing army of backyard chicken farmers has existed as a niche for a number of years. Brendan Moore and Kelley Aye got started two years ago with chicks and a coop kit. They kept the chicks in a heat box and built them a pen. Tragedy struck in the form of a hawk, skunk, and neighborhood dog, with the entirety of their flock perishing from predators last year. The pair remained stalwart in the face of adversity, and they now have new birds.

Neighbors are generally fine with the birds as long as they remain within boundaries and no roosters keep them up. Brendan and Kelley’s chickens were “at large” from the beginning and complaints prompted them to construct a fence. No one has a problem currently and the project is overall much more sanitary.

Bill Farrar, whose chicken project stretches back four years, originally wanted a small patch for a small coop. His landlord, of all people, encouraged him to get more and split the cost with him to open up space for more birds. Mr. Farrar has quite a flock, and his added experience has made him somewhat of an authority for other backyard chicken farmers in town. He and Jodi Farrar even set up a chicken “clinic” for some time to treat sick and injured birds.

Mr. Farrar started a Facebook Group (closed) called Yellow Springs Chicken Flock for members of the community with chickens. He is the current admin. The group numbers are far larger than the interviewees for this article, so what is here will have to be taken as a sample size of the bigger picture.

Most members use their chickens for eggs, not meat, but it’s not out of the question. As longtime resident and chicken owner Leslie Lippert puts it, she’s not “running a chicken retirement home” so her lovely ladies aren’t off the hook once they stop producing eggs. Trish Russel, a two-year chicken owner, also hinted at the possibility of using her chickens for meat. Hens start laying eggs, unfertilized or not, at six to nine months, and lay every day for two to three years. After three years, the eggs run out. Chickens can live to be fifteen years in captivity, so the window of opportunity for eggs is quite narrow and retirement is lengthy.

Mrs. Lippert’s chicken set-up is quite unique and almost impossible to miss if you’re walking down Winter Street towards downtown. A large geodesic dome (ziptie.domes.com) covers her birds and protects them from a local hawk staked out at the Union School house (a common “villain” in this drama.) She has multiple garden beds surrounding the hens and another dome for her cat. It’s a garden from a fantasy novel, but Mrs. Lippert is a serious owner. She acquired her birds one year ago and views producing her own eggs as healthier than pesticide and hormone infused eggs from the store.

Perhaps Mrs. Lippert has a point. Lots of large-scale industrial chickens are raised in atrocious conditions on land fraught with pesticides. Bill Farrar has a number of hen “refugees” from such battery cages and they weather the wear of their upbringing, with broken beaks and tired eyes. They are happy and free with Bill, and even if he decides that they will one day become dinner, will live the rest of their lives in comfort.

Not surprisingly, chickens mostly eat chicken feed, with supplements and treats in their diet consisting of fruits (no oranges or lemons), vegetables, bugs, and lots of grass. If the chickens are allowed to graze, they can strip a yard rather effectively. The excess nitrogen from their lawn diet makes their excrement too “hot” and can potentially burn crops if used as fertilizer. Leslie puts their droppings in the compost.

Breeds include, but are not limited to, Golden Comet, Buff Brahmin, Buff Orpington, New Hampshire, Rhode Island Red, Barred Rocks, and Americanas. In regards to social structure, Bill states that there is a clearly established pecking order, but it’s more to maintain stability within the flock than dominance. It is simply to make sure everyone is in the right place. The hens wait their turn to eat and sleep with little squabbling. Dominance does exist still though. Brendan and Kelley have a duck that bullies the hens and Trish Russell has what she calls a “matriarch”, an eldest, alpha hen that calls the other chickens to the coop and breaks up fights. Bill also has ducks that act as “cops”. He jokes that they report bad chicken behavior to him when he comes out to feed them.

Should large-scale businesses in the area feel threatened by these guerilla chicken farmers? Probably not. Their distribution is on a neighborhood scale, and if nothing else, it’s mostly a fun project. Still, three bucks for a dozen eggs is not bad, so there is some competition. Kelley Aye does want to step up and produce goat cheese at some point. Stephanie Lawson and her daughter Sophie, who started their chicken project one year ago, see it more as a hobby. Sophie wants to be a vet someday and live on a farm, as farming runs in the family. If the hawks, raccoons, and neighborhood dogs (The Rudolfs gave up after a series of massacres) don’t ravage the stock, and the neighbors don’t complain, the dreams of these guerilla farmers should fly onward.