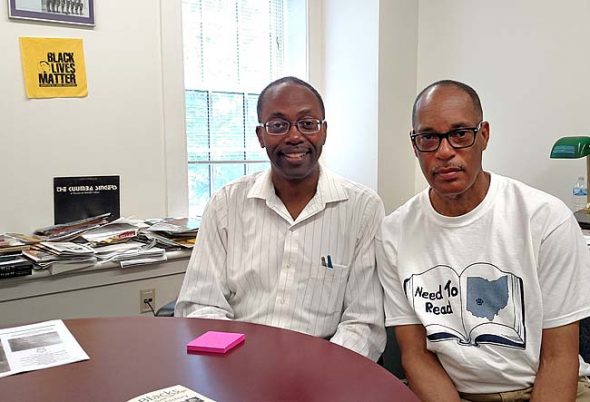 Antioch Professor of History Kevin McGruder, left, and Mills Lawn School Counselor John Gudgel, former principal of Yellow Springs High School, helped develop the new brochure, “Blacks in Yellow Springs,” highlighting the rich history of African Americans in the village. Undertaken by the 365 Project, the brochure is available at the Yellow Springs Chamber of Commerce, the Train Station and elsewhere in the village. (Photo by Dylan Taylor-Lehman)

A spotlight on local black history

The crucial role of Yellow Springs’ African-American residents is being told through a recently updated brochure entitled “Blacks in Yellow Springs.”

The brochure highlights the significant role that blacks have played and continue to play in the village, according to Antioch professor Kevin McGruder, who, as treasurer of the nonprofit 365 Project, helped put the pamphlet together.

The brochure’s centerpiece is a timeline of events and local African Americans who have helped define black history here. The list includes people like Adbner and Betsy Morton, who in 1835 were the first known blacks to settle in Yellow Springs, and Donald Perry, a Yellow Springs youth sports pioneer for whom the T-ball league is named. The historic Conway Colony, a colony founded by escaped slaves, is mentioned, as are black residents who have held public office. The brochure also includes a map of sites central to Yellow Springs black history.

The Yellow Springs Chamber of Commerce paid to print the brochures and make them available to the public.

The pamphlet aims to address a gap in the village’s collective knowledge, according to Gudgel, who said that while Yellow Springs has a rich tradition of black residents, there hasn’t yet been a work specifically focused on black history or being African American in the village.

Previous volumes on the history of Yellow Springs — such as “Why They Came,” published by the Yellow Springs Community Council in 1956, and the News’ “Two Hundred Years of Yellow Springs” — provide a general overview of the town’s history but don’t delve specifically into any one group’s experience, he said. Students of local history often know about the Gegner barbershop demonstration or the Conway Colony, he said, but they don’t realize that Yellow Springs has a legacy of black community leaders.

Helping people become more familiar about their heritage reflects the aims of the 365 Project, said Gudgel, who is president of the group. The group’s name refers to its efforts to promote and sustain black history throughout the entire year instead of just one month, February, which is Black History Month.

Gudgel, who was the principal of YSHS from 1995 to 2010 and currently serves as counselor at Mills Lawn and coaches the Bulldog track and field team, said the pamphlet contains many “teachable moments.” Events like Coretta Scott King being denied employment in Yellow Springs schools or the fact that the Little Art Theatre used to be segregated are important to understanding one’s place in the town, he said, and this knowledge is important not just for students but for the whole community.

“Knowing that Yellow Springs had a black fire chief and a black police chief and [black] members of Council and black business owners — there is something powerful embedded in these stories, and they need to be told,” he said.

McGruder, author of “Race and Real Estate: Conflict and Cooperation in Harlem, 1890–1920,” moved to the village from New York City in 2012. He had heard of Antioch and Yellow Springs, but didn’t know the full extent of its black history. When he joined the Central Chapel American Methodist Church, he realized that its existence indicates the richness and integral nature of the black community. The church has been a cornerstone of the African-American community in Yellow Springs since it was founded in 1866.

“[The longevity of the church] suggests the presence of this history and its stewardship,” he said.

In fact, the life of one historic AME member was particularly inspiring to McGruder. The pamphlet mentions Wheeling Gaunt, who moved to Yellow Springs and became one of its most prominent citizens.

Gaunt grew up as a slave in northern Kentucky, and was able to buy himself, his wife and another family member out of slavery when he was in his mid-30s. He filed manumission papers for his wife when he realized she was technically his property. After a successful stint as a property owner, Gaunt left Kentucky a fairly wealthy man. He and his family arrived in Yellow Springs in 1860, where he built homes and purchased farmland. When he died at age 82, he left land to the Village and to Wilberforce University, the nation’s first private college for blacks. Area newspapers reported the passing of “our wealthy colored citizen,” calling him one of the area’s “most highly respected” and “noble, generous and kind-hearted citizens.” The Village named land after him in 1955.

The new pamphlet updates a brochure published in 2008 by Antioch professor Dr. Jahwara Giddings and his students, who put together the pamphlet with help from students in his African-American Studies classes.

Updating the pamphlet was something members of the 365 Project began discussing around two years ago, said McGruder. When the group was awarded a Miller Fellowship in 2014, one of the tasks the fellows undertook was re-releasing the brochure. Miller Fellows Aisha Etuazim and Julia Dammons, both Antioch students, added names to the timeline and tweaked the design, preparing it for its recent publication.

Karen Wintrow, executive director of the Yellow Springs Chamber of Commerce, said the pamphlet addresses a topic of interest to many people who come to Yellow Springs.

“Visitors are always asking for information about Yellow Springs history,” she said. “We have such a rich history, and it’s always good to share that with people.”

The tour will also get youth more directly involved in teaching and relating to their history, Gudgel said. Two middle school and one high school student are currently training to be the tour guides.

The tour is scheduled for July 23 and August 20.

Gudgel has lived in Yellow Springs for most of his life, and pointed out that the black history of the village is his history.

“I worked with and knew many people in the pamphlet,” he said. “This legacy was the norm. It’s an important part of Yellow Springs that needs to be acknowledged and recognized.”

The brochure is available at the Yellow Springs Chamber of Commerce, the Train Station and other locations with informational brochures.