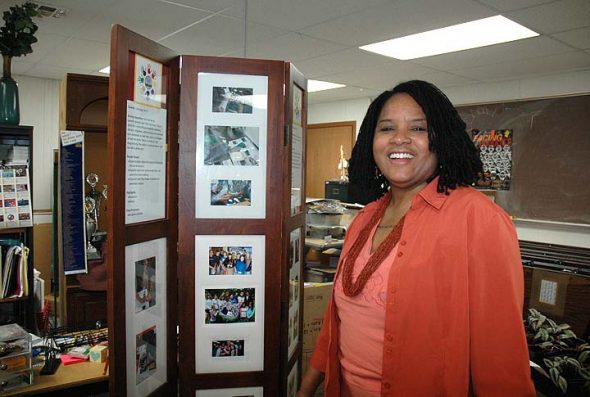 Aurelia Blake is retiring this year, after teaching for 20 years in Yellow Springs schools, 16 of them at McKinney Middle School. A passionate advocate for students and their writing, she taught seventh- and eighth-grade language arts, and mentored dozens of young writers through the afterschool program Power of the Pen. (Photo by Audrey Hackett)

Aurelia Blake retires— Power of the pen, and of the heart

For 16 years, language arts teacher Aurelia Blake has been a tough and tender champion for local middle school students and their writing. In her seventh- and eighth-grade language arts classes, and in her local leadership of Power of the Pen, an interscholastic writing competition for middle schoolers, she’s nurtured students who see themselves as writers — and challenged those who don’t yet hold that self-perception to change their views.

“When a kid comes and says, ‘I never saw myself as a writer before,’ that’s when you know you’ve made a difference,” Blake said in a recent interview.

By all accounts, Blake has made a difference in hundreds of students’ lives. According to Principal Tim Krier, the former Air Force public affairs officer is a “true original” who’s “helped define the character” of McKinney Middle throughout her 16 years at the school.

“She’s creative as all get-out and an advocate for all kids,” he said this week.

And that’s one reason Krier and others are already steeling themselves for the loss of Blake, who’s retiring from Yellow Springs schools this summer. Though she’s winding down her last year as a teacher, she’s certain she’ll continue working with middle school students in some capacity. She hopes to return to McKinney in a mentorship role, and if no one is available to carry forward Power of the Pen, she’s prepared to come back to run that extracurricular program. While she didn’t start Power of the Pen locally, she turned the program into the powerhouse it’s become. In fact, this Friday, the day after school ends, she and what she calls her Power of the Pen “diehards” (the ones who hung in through the year “even when there were no snacks,” she joked) are headed to state-level competition. Rising eighth-grader Deena Green will be competing.

On a recent afterschool afternoon, Blake read aloud, with obvious pride and gorgeous cadence, a poem written by Green. Blake had previously spoken about certain “perfect” pieces of student writing.

“I can remember stories that students have written over the years, stories you read and go, ‘Whoa, that’s a perfect piece of writing.’ Most often it’s a sad piece,” she said.

Green’s poem seemed to have that special quality. But how did Green feel?
“I was really scared of Ms. Blake at first,” Green admitted. “I still sort of am. She’s an imposing person.” Blake looked at her and laughed. “But my writing has improved so much,” Green continued.

Blake seems to be something of a paradox to her students. She’s beloved, and she obviously loves her students, but she’s also fierce. Imposing, to use Green’s word. Or “commanding,” as former student Henry Potts-Rubin recalled.

“The way Ms. Blake teaches — she’s very commanding. I found her strong forward attitude extremely helpful. It kept me on track,” he said. Potts-Rubin, who graduates this week, took part in Power of the Pen several years ago; for his senior project, he worked with fellow senior Ursula Kremer, another former Blake student, to organize a high school writing competition modeled after the middle school program.

What stuck out for Kremer, as for many who describe Blake, is her passion. “I remember how passionate she could be. She was enthusiastic about every single thing, from grammar to research projects,” said Kremer, who hopes to study English and creative writing in college, and credits Blake as a formative influence.

If, on the authority of her students, Blake is a born teacher, she didn’t actually start out that way. She was a theater major in college, graduating from the University of Colorado, Boulder, in 1975. She entered the Air Force a few years later, in hopes of traveling. And she did travel, to England, Spain and elsewhere. She was assigned to Wright-Patterson AFB twice; the second time, she bought a house in Yellow Springs. Divorced, and a single mom of three children, she took an “early out” from the Air Force, plowed the money into a coffee shop business in Columbus, which ultimately folded, then returned to the Air Force via the reserves. But a poster for a one-year teaching degree at Antioch University Midwest caught her eye.

The program was a perfect match, Blake said, “so hands-on, which is how I teach and learn.” She taught for a year in Miamisburg, then found a home in Yellow Springs schools, teaching at Mills Lawn School from 1996 to 2000. But when a position at the middle school opened up, she jumped at the chance to work with an age group that some teachers flee.

Middle school students have a lot of angst, she conceded, but “they’re also developing this really strong sense of justice and all these values; they’re wanting to know how other people think and live.” It’s an age of both openness and self-absorption, and writing seems to connect the one with the other in a powerful way, she said.

“Writing helps students discover a whole new facet of themselves,” she said. And Blake helps them make the bridge from self-discovery to the lives of other people. For example, in her “multicultural” unit, Blake challenges students to read a book whose main character is different in all outward respects from them. They’re further challenged to write from the perspective of that character, then to write themselves into the story, as someone interacting with the character — helping or even warning that person as the climax of the story approaches.

It’s a lesson students don’t soon forget, Blake said. “They feel it in their heart — now that’s the magic of the written word.”

Blake looked around her room — classroom 101, hers from the start — as she spoke, and shook her head over all the work of sorting and packing that remained to be done. It was important to lay a clean slate for her successor, Jaime Adoff, a writer and son of Yellow Springs’ hometown children’s author Virginia Hamilton. “This has to be his room,” Blake said.

But meanwhile, the room was still hers, and its contents were in pieces all around. “I’m a little traumatized,” she confessed. “It feels like my life is being dismantled. I know [the feeling] is not going to last, but there’s a tremendous sadness.” She paused. “It will go, I know it will go.”

Blake herself will be staying in Yellow Springs. In April, she married former Cincinnati resident Brian McGraw. She’s retiring partly to take care of her mother, Doris, who’s 96. Or rather, to slow down and enjoy taking care of Doris, “instead of always rush-rush-rushing all the time.” And Blake feels in her bones that “there’s something else I have to do; I’m waiting for the sign.”

She wants to sing with the World House Choir; she’s interested in working with women in prison. She wants to stay connected to youth. Young people are her passion and her pride, not to mention the beneficiaries of her many “Blakisms,” ranging from writing advice (“show, don’t tell”) to what amounts to life advice (“knees and nose to the wall” — a method for getting any kind of tough work done).

Under her brisk, Air Force-informed demeanor is a “really warm heart,” said Krier — something middle schoolers have discovered for themselves over the past 16 years.

“Believe it or not, she may be one of the biggest softies out there,” he said.

One Response to “Aurelia Blake retires— Power of the pen, and of the heart”