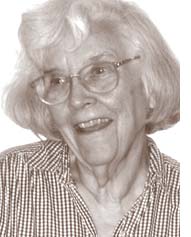 Born in Richmond, Ind. in 1924, Cathy was the daughter of Howard and Anna Brinton, who were leading Quaker intellectuals. Both parents were professors and administrators at Earlham College in Indiana, and later at Mills College, in California. The family of six eventually settled at Pendle Hill, a Quaker study and retreat center outside Philadelphia Pa., where her parents served as co-directors. Cathy attended Westtown Boarding School and Antioch College where she studied Psychology and Occupational Therapy.

In 1945, she was among the first Antiochians to work in a challenging co-op in the American Friends Service Committee (AFSC) unit at the Philadelphia State Hospital for Mental Diseases, the second largest mental hospital in the country at the time. In her final paper, she reflected on the hostile attitude shown by the other attendants because of her pacifist views, noting they “stay[ed] away from us who are Conscience Objectors to Military Service.” She commented on the dilapidated facilities and overcrowding as well as the use of worker patients who, although resentful of not being paid, were often effective in managing an entire ward. The AFSC unit (full of conscience objectors doing alternative service during WWII) exposed the ongoing abuse of the more violent patients. Cathy reflected on the positive therapies patients experienced and how they “respond to kind treatment and can be gently handled in some cases where force had previously been used.”

After the war, Cathy worked in a displaced person camp in Germany through the AFSC, helping to feed children. For many years, she was a teacher at Haverford Friends School, where she taught kindergarten and second grade.

She met her husband, John Richard Cary, at a Quaker Meeting in Baltimore, Md., in the early 1950s. She had left her hat at Meeting and John, seizing the opportunity, bicycled to her apartment, hat in hand. John and Cathy settled in Haverford, Pa., where John became a professor of German literature at Haverford College.

Cathy loved collecting rocks of all sizes and often brought them home from vacations, placing them around the garden. She was a skilled potter. She was fascinated by bones, feathers, and the human form whose shapes and colors influenced her art. She could grow anything from either seed or sprout and loved taking the family to Longwood Gardens in Kennett Square, Pa. Cathy reveled in holiday traditions, many of them brought home from her travels in Germany. One of her favorites was to pour melted pieces of lead into cold water to reveal the fortune for the coming year on New Year’s Eve.

A child of the Depression, Cathy taught her four daughters to reuse and save resources. Everyone in the family learned to wrap gifts with reused paper and without tape, with the result that the family wrapping paper drawer held generations of well-preserved paper and ribbon.

Married for 65 years this past July, Cathy and John raised four daughters: Margaret (Martin Garfinkel), of Seattle, Wa.; Ruth (Bruce Grant), of Wallingford, Pa.; Joan, of Philadelphia, Pa.; and Callie (Bob Devine), of Yellow Springs. She was proud of her nine grandchildren: Ben and Maya Garfinkel, Anna and Ian Grant, Alex Harris, Eamonn Cary and Jesse, Eric and Sean Devine. She instilled in her family the conviction to act on one’s values and to give a hand up to those in need.

In 1946, when she composed her senior paper at Antioch, she reflected on being a “birthright” Friend:

“I never really questioned my pacifism until the war broke out in Europe … I was infuriated by the fact that people did not want wars but were willing to fight them. I couldn’t see the complexity of human emotion and the blindness with which we make each action without realizing who it will affect … I think more people should give pacifism a try or more specifically non-violent techniques. They have worked where war has not.”

Once asked to write what characteristics she liked and disliked the most, she wrote, “I like cheerfulness and a good sense of humor. Pretense, I like the least!”

A celebration of Catharine Morris Brinton Cary’s life will take place with family and friends throughout the first weekend in July. A sugar maple tree has been planted on the Antioch College campus in her memory. All donations in her name may be made to the Glen Helen Raptor Center or Pendle Hill.