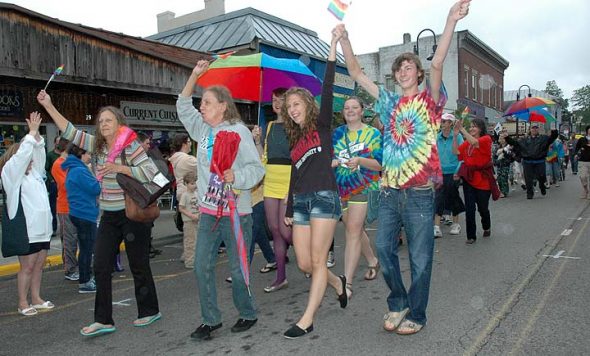 The fifth annual YS Pride Celebration will take place downtown on Saturday, June 25. The day will be packed full of events, such as live music, guest speakers and an interfaith service of affirmation. Dayton-area drag performers, The Rubi Girls, will perform at Peach’s. Shown above are revelers from last year’s Pride parade, marching proudly in the rain. (News Archive Photo by Diane Chiddister)

Although the recent events in Orlando have prompted outpourings of support and affirmation to the LGBTQ+ community, it doesn’t take tragedy for people to appreciate the beauty of life and love. Yellow Springs will be offering its welcome and affirmation for LGBTQ+ folks and their allies this weekend with the village’s fifth annual YS Pride celebration.

“One of the themes this year will be ‘no hate’ —  no hate from anybody to anybody,” said Alex Scott, one of the event’s organizers.

TRUE FRIENDS
The Yellow Springs Friends Meeting will host a meet and greet for LGBTQ+ youth on Sunday, June 26, at 10 a.m., before meeting for worship at 11:15 a.m.

The meet-and-greet takes place at Rockford Chapel on the Antioch College campus.
The event is linked to a nationwide social media campaign this week. Called #presentperfect, members of all faiths will be sending a “thunderclap of support” to LGBTQ+ youth across social media on Thursday, June 23. In conjunction with this message, many places of worship nationwide will also extend special welcomes to LGBTQ+ youth of any or no faith during the weekend following the social media event.

The #presentperfect campaign is an initiative helmed by the website myoutspirit.com, which is an “interfaith social network connecting LGBTQ people of any or no faith tradition with resources that support their spiritual, mental, physical, and social well-being.” Users sign up through the website to have their social media networks automatically send out a message of support.
Nationwide, Quakers, or Friends, have for decades offered marriage to same-sex couples as a statement of equality to gays and lesbians, according to Pat Dewees, of the local Friends meeting. The local group agreed “around 15 years ago” to approve ­marriage for same sex couples, she said.

YS Pride 2016 will be characteristically filled with dancing and music. Spiritual and gustatory needs will also be met at this year’s festival, thanks to a scheduled multi-faith roundtable and the presence of food trucks. Some favorite musical acts will return, as will a noted drag performance troupe.

The festivities kick off on Friday, June 24, with a dance party at the Winds Cafe. Reverend Roxy will spin some tunes starting at 10 p.m. The $20 cover charge goes directly to GLSEN (Gay, Lesbian & Straight Education Network) of Greater Dayton. The Presbyterian Church will also hold a dance party for revelers 18 and under.

Saturday, June 25, brings a full afternoon of events, starting at 1 p.m. at the Bryan Center. An “all denominational” religious diversity celebration will take place at 2 p.m.

“Members of different faiths will talk about how their religious tradition supports the LGBTQ+ community,” said Aaron Saari, the local Presbyterian minister serving his fourth year as one of Pride’s committee members. A Jewish layperson will lead a kaddish, he added.

The ceremony will be followed by a performance by the Ohio Brass and Electric band at 3 p.m. The band is basically Pride’s house band, Saari said, and will have more time on stage this year than ever before.

This year’s featured speaker, not yet named at press time, is scheduled for 4 p.m., though the celebration will also have an open mic session. People can connect, process and mourn together by speaking their piece, Saari said. The mic will be open to everyone. Pride’s king and queen will be elected at 5 p.m., and will then lead a parade around town.

The parade will wind back to the Bryan Center, where it will be followed at 6 p.m. by a fairly self-explanatory event: dancin’ in the street. Also at 6 p.m. will be a Pride movie celebration at The Little Art Theatre.

For the duration of the festival, groups like Equality Ohio and organizations raising awareness about HIV and domestic violence will have booths for perusal. Food trucks will keep people sated. And, Saari added, there will be a bouncy castle.

“We say the bouncy castle is for kids, but I had a lot of fun in it last year,” he said.

YS Pride 2016 will be capped off by two performances at Peach’s. A Soul Fire Tribe dance performance is scheduled for 9 p.m., and it does, in fact, involve fire. The Rubi Girls, a Dayton area drag group, will go on at 10 p.m. According to their website, the Rubi Girls are a “dynamic, close-knit troupe of professional men [who have] been performing since the late 1980s.” The group is the focus of an awarding-winning documentary short and is noted for its service to the Dayton-area community.

All in all, YS Pride 2016 is going to be a safe, shared space where everyone can express themselves, said Saari. In recognition of the violence faced by the LGBTQ+ community, the names of the 49 victims of the Orlando shooting will be read, as will the names of trans individuals killed this year.

Saari said that in trying to explain the Orlando shooting, emphasis has been placed on extremist religious motivations instead of the broader culture of homophobia and apparent self-loathing that exists alongside it. He and the other organizers of Pride want people to feel comfortable and know that they are supported, no matter who they are.

“We are throwing a party in the face of adversity,” he said. “We’re not going to let fear win.”

More information can be found at facebook.com/ys.pride .