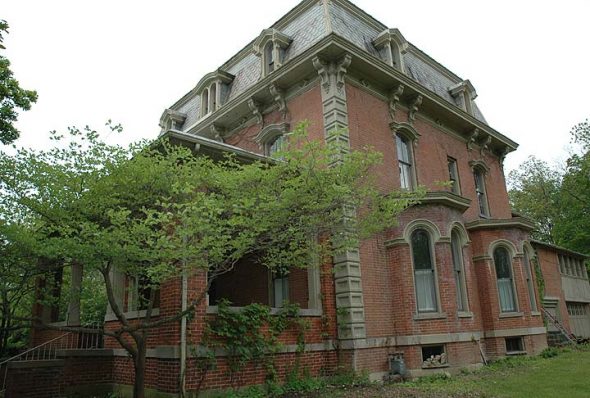 The historic Italianate structure at 830 Xenia Ave., which for the past 20 years has housed 12 offices, has turned back into a private residence. It was sold last week to Bill Cacciolfi, who will live in the building with his wife, Arati. (Photo by Diane Chiddister)

One of the village’s most stately historic buildings has recently, after decades of use as an office building, returned to its original purpose as a home.

“I know it’s a massive building for two people, but I’ve wanted it forever,” said Bill Cacciolfi, who recently purchased the Italianate building with a mansard roof at 830 Xenia Ave., known to many as the longtime home of Vie Design, the design business of the late Read Viemeister.

Cacciolfi closed on the building last Monday, May 16. He paid $425,000 for the 12-bedroom structure, purchasing it from Milton Cox of Oxford, Ohio, a retired Miami University math professor. Cox had paid $375,000 for the building in 1996 and had intended, when he purchased the building, to live there, according to longtime building manager Richard Zopf. However, a combination of factors prompted Cox to sell, including the realization that he wouldn’t be moving to Yellow Springs.

The building’s distinctive architecture, along with its expansive lawn, make it unique in the village, according to Zopf.

“It’s an architectural treasure in Yellow Springs,” he said.

The large red brick building on nine lots has anchored the corner of Xenia Avenue and South College Street since 1874, when it was built by John Burns Weston, a professor of Greek at Antioch College and occasional interim president of the college. It was later purchased by former Antioch College President Simeon Fess, who became a U.S. Senator in the 1920s and considered the building a showpiece worthy of a politician, according to Scott Sanders of Antiochiana. After several intervening owners, in the late 1950s Jim and Mary Agna purchased the building and raised their family there; in 1970 Read and Beverly Viemeister bought the building, where Read housed his design business for the next 25 years. Since Cox purchased the building in 1996, it provided office space for 12 businesses, including those of psychologist Esther Damaser, videographer Eric Johnson and chiropractor Mark Duckwall.

Most of 830 Xenia Ave. remains intact since its construction about 140 years ago, although the front porch and sun porch were additions, according to Zopf. And a historic easement put on the building and land by the Viemeisters ensures that the structural integrity of the building will continue.

Cacciolfi, who is 55, was driving through Yellow Springs last fall when he stopped to inquire about the availability of office space in the building, he said in an interview last week. A former Yellow Springs business owner, Cacciolfi owned the outdoor adventure store New World Expeditions from 1984 to 1997, when he moved his business to Waynesville. Since then, he has partnered with a game lodge in South Africa to provide safaris for tourists. He mainly works with charities, he said, offering his tours for charity auctions, counting Save the Whales, the Humane Society and the American Heart Association as some of his charity partners.

In 1986 Cacciolfi was befriended by Bev and Read Viemeister, who invited him for coffee and a tour of the big brick building. Since then, he said, the building has been his dream house. So when he stopped to inquire about office space last fall, he also inquired if the building was for sale. And he found that the owner was open to selling.

Several factors contributed to the decision to sell, according to Zopf.

First, several longterm office tenants had recently moved out, leading to a decrease in cash flow for the landlord. And while Zopf considers 830 Xenia Ave. to be in good shape structurally, significant maintenance expenses are coming up, including repaving the parking lot and painting the exterior.

After several months of negotiations on price, the parties reached an agreement, and office occupants were told they needed to leave by the end of March. And last week, Cacciolfi moved in. His wife, Arati, who currently lives in Virginia, will join him soon, he said.

Cacciolfi expects to run his expedition business — which he describes as “just me and a laptop” — out of his home, and will also display in the home’s front rooms souvenirs from his many tours in Africa, he said. Cacciolfi declined to have his picture taken for this article.

And he also hopes the property can do some good for the local community. Specifically, he is open to hosting fundraising events for nonprofits that benefit humans or animals.

Owning a home protected by a historic easement can offer challenges, Cacciolfi found in one of the first changes he made to the property. In recent weeks, he has had about a dozen trees cut down, and while several were diseased, most were not, according to Zopf, who will continue to act as a consultant on the building.

Cutting down the trees would be a violation of the historic easement unless they’re replaced by other native hardwood trees, according to Tecumseh Land Trust Executive Director Krista Magaw, who said that she and Cacciolfi have an appointment to meet and discuss the situation.

According to Cacciolfi, the trees were a hazard to the house, and he thought he had the right to cut them down.