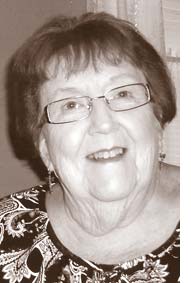 Elizabeth Ann DeWine was born on Feb. 9, 1934, in Yellow Springs, to parents George and Alice (Budd) DeWine. She was lovingly known for most of her life as “Mickey,” after her older brother, Dick, dubbed her that when she was a small girl. She was born in the house that is now the location of the current Winds Wine Cellar and previous location of the well-known local institution, the Village Bakery — something that would later prove prophetic.

Mickey grew up in Yellow Springs, the middle child between her brother Dick and younger brother Jerry. She loved and adored them both. When she was young, she attended the Antioch School, and in 1952, graduated from Bryan High School (Yellow Springs). Mickey attended both Wittenberg University and Otterbein University, where she studied English. Though she missed her family when she was attending college, she would fondly recall how much she enjoyed it when one of her brothers would pick her up and bring her home for visits!

For several years following college, Mickey worked as a librarian at the Dayton Public Library. During her time there, she was closely involved with the establishment of the Library’s first “Book Mobile,” distributing countless books to local area schools and children. She loved the book deliveries, interacting with the kids, and sharing the great joy she, herself, found in books. One of Mickey’s greatest passions in life was reading. She loved books and devoured them, one after the other.

In early 1961, local Yellow Springs resident Clara McNutt was working at the Village Bakery, then run by a baker named Dick Harwood. Her daughter, Polly, was married to Mickey’s brother Jerry. One day, Clara told Dick that it was time for him to settle down and that she had just the right girl for him — Mickey DeWine.

Dick took Mickey out on their first date in January 1961, and by September, they were married!

Mickey and Dick made their first home in Xenia, where they lived for 40 years, before later moving to Springfield. They shared many wonderful adventures during their years together, and in September 2011, they joyfully celebrated their 50th wedding anniversary.

Throughout her life, Mickey was an amazing volunteer, devoting and freely giving her time to many organizations. She proudly served as the Bryan High School Alumni Secretary for a number of years. She worked tirelessly to collect information on graduates and wrote the alumni newsletters, which she would mail two to three times a year to a list of over 700 people. Mickey was also very active in organizing the Bryan High School Reunion each year.

For over 30 years, Mickey was a dedicated member of the Xenia Republican Women’s Club. She served in all the executive offices and on most of the committees and received the “Tribute to Women Award” from the Southern Ohio Federation of Republican Women.

Mickey was also very active in the Xenia Chapter of the American Business Women Association. She served as President, Vice President, Secretary, and on numerous committees. Her devotion and commitment to the group culminated in 2006, when the organization named her “Woman of the Year.”

Mickey will be especially remembered for her work as a Cookie Captain, where she was in charge of the area distribution of Girl Scout cookies to the individual Scouts. Many a day, her home would be stacked with box upon box of cookies. As her good friend Bernie Powers once said, Mickey was a true “Cookie Monster!”

Mickey also spent countless hours volunteering on her nephew Mike’s many campaigns for political office. She was his chief volunteer and ran the headquarters for many of his campaigns. She helped organize the DeWine Family Ice Cream Social, and in the early campaigns, she handled Mike’s entire direct mail operation  — and that was in the days when every piece of mail was handwritten! Amid the boxes of Girl Scout cookies, Mickey also could often be found among pile upon pile of campaign direct mail letters!

When she wasn’t busy volunteering, Mickey loved to watch movies and true crime programs on television. She also loved to go on shopping trips and lunch dates with family and friends. She enjoyed spending time on her computer and emailing friends, but also enjoyed being outside tending to her flowers.

Mickey loved to travel. She and Dick and her family traveled frequently to antique car shows all over the state and nearby states. They visited Amish country, Maine, Alaska, and Florida, among other places. Mickey especially enjoyed her trips to Florida, traveling there with family until just recently.

Christmas was Mickey’s favorite holiday, and she always made it special. She decorated her home beautifully, made her special “Pecan Crispies,” and took great care in picking out just the right gifts for her family and friends. Mickey would set elaborate table settings for family gatherings, especially at Christmas and other holidays.

Mickey was a very bright woman, who was always up on current events. If you wanted to know about something, you just needed to ask Mickey! She read the newspaper — often multiple newspapers — daily. She loved to go to the Greene County Library, just to sit and read.

What mattered most to Mickey, though, was her family, whom she loved deeply and without condition. Her husband, Dick, thought the world of Mickey. He simply adored her. And, though she ran the show at home, she loved Dick’s sense of humor and how he would sweetly and affectionately tease her. They truly complemented one another.

Mickey had a special place in her heart for their daughter, Rhonda. They had a precious and treasured relationship, doing special things together — every season of every year. They looked out for each other and took care of each other.

Mickey also had a very close bond with her nephew, Mike, with whom she shared her love of movies and books. She would often take him to the movies when he was a child — something they both very much enjoyed. Mike and his wife, Fran, were always grateful to Mickey for her love and support and for her involvement in the lives of their children and grandchildren.

Mickey’s granddaughter Tiffany and great-granddaughter Tiana loved to spend time with her. When Tiffany was a little girl, she would stay the night at Mickey’s house at least once a week. She would often play “waitress” on Mickey, serving her made-up food concoctions. But, no matter how terrible it tasted, Mickey would always eat whatever Tiffany made! And, when Tiana was little, Mickey would read countless story books to her and encouraged Tiana to write her own stories, including one she helped her write about their family dog, called “The Adventures of Lola!”

Mickey took good care of everyone around her. When her own health began to fail, she never complained. Instead, she faced her declining health with optimism and a positive outlook.

Mickey Harwood was gentle, gracious, and generous. She was kind, caring, and tolerant. She never judged others and always saw the good in people. Her mission in life was to give. That’s just who she was. She gave of her time and energy and of her heart and spirit —  never asking for anything in return.

She will be missed dearly.

The family held a service for Mickey at St. Paul Catholic Church on Saturday, July 23, followed by a burial at Clifton Union Cemetery. In lieu of flowers, donations in her memory may be directed to the Dayton office of the Girl Scouts of Western Ohio (formerly the Buckeye Trails Girl Scout Council), located at 450 Shoup Mill Road, Dayton, OH 45415.

One Response to “Elizabeth ‘Mickey’ Harwood”