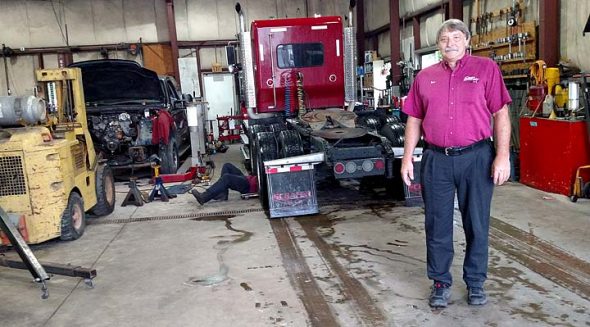 David and Karen Ehman are celebrating the 70th anniversary of Ehman’s Garage on U.S. 68 North, which was started by David Ehman’s father, and has a devoted local following. (Photo by Dylan Taylor-Lehman)

For car aficionados, a car from 1946 is a vintage model that represents a timeless era. Ehman’s Garage, located on Springfield-Xenia Road, which opened in 1946, evokes the same sense of a classic era. The garage, run by David Ehman, son of the founder, is celebrating its 70th anniversary this year.

Ehman’s Garage was started by Ehman’s father, who worked as a mechanic for his entire life. The shop began as a single car garage behind the family’s house before moving to its present location in 1990, when Ehman finished buying the business from his parents and took over as manager.

The garage is still a family affair. Ehman’s wife Karen does all of the accounting and bookkeeping, while the couple’s two daughters worked in the shop growing up. (“They enjoyed it, to a point,” he said.) A few of their technicians have worked with the family for over 20 years he said, essentially part of the family.

Over the years, Ehman developed a sixth sense for what was plaguing a problematic car, and honed his abilities to be an integral part of the shop. He used to love rebuilding Corvettes in his spare time, but he laughed and said that now he doesn’t take his work home with him.

However, as he got older, he decided he didn’t want to be a mechanic professionally. He worked building International Harvester vehicles out of high school and later bought a semi truck. He was a truck driver for three years before deciding he’d had his fill, realizing that as much as he drove, he wasn’t really getting to see the country. Plus he was away from home for long stretches, which was tough, he said. Ultimately he made his way back to the area and began working at the family shop again. Overall, he said, it’s not a bad way to make a living.

“School busses, fire trucks and police cruisers — we work on almost anything,” he said. “It’s fun to make something new again.”

Ehman learned a lot from his grandfather, a machinist who used to repair engines and their various components. This method of doing things — precision machining or fabrication of parts — is basically a thing of the past, he said. Parts for today’s cars are made to be thrown away if they break. Ehman said he appreciated his grandfather’s Depression-era approach to managing resources, which manifests itself in some ways in the shop today. The shop is heated with a waste oil furnace, he said, explaining that the shop saves the old oil from the cars they’re working on for winter.

Working as a mechanic has given Ehman a front-row seat to the evolution of automobiles, which has in turn transformed the role of a mechanic. Starting in the 1980s, he said, computer systems began playing a prominent role in how cars function. Even diagnosing what a problem is takes so much more time than it ever has, he said. Many more people were working on cars 30 years ago, he said, because engines were simpler then.

“People aren’t aware of how complicated cars are these days,” he said. “And they’re going to get a lot more complicated.”

But whether Ehman is wrestling with computer systems or doing a basic repair, one part of his approach is to try to teach customers what is wrong with their car. The idea is to treat everyone fairly and earn their trust, a philosophy he says was instilled in him by his dad from an early age.

“I really want people to understand what we’re doing and why,” he laughed. “But sometimes my explanations get a bit technical. When I see people’s eyes gloss over, I know I have back up and put it in simpler terms.”

While Ehman now manages the shop instead of working as a mechanic, the fact that he’s been able to carry on the family business and indulge his love of working on trucks has made for a rewarding career. The shop threw a party for its 50th anniversary, but Ehman doesn’t have plans for a big 70th-anniversary blowout. For him, the longevity of the shop, for him and as part of the community, is gratifying enough.

“I love what I do,” he said. “I’m very happy that this is my occupation. I still enjoy it.”