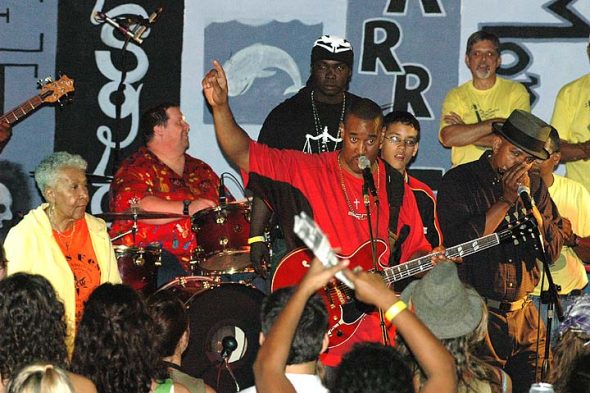 The AACW Blues, Jazz & Gospel Fest returns to the village this weekend with diverse performances and activities (see side bar on page 5 for details). At the heart of this year’s festival is a community memorial service for Faith Patterson, the festival’s founder and a beloved Yellow Springs community member who died in January. Patterson will be honored at 3 p.m. Saturday on the 2016 festival grounds at the John Bryan Center. Here, she is pictured watching her son, musician Nerak Roth Patterson, perform at the festival in 2006. (News archive photo by Robert Hasek)

Remembering, honoring and celebrating the life of teacher and community organizer Faith Patterson will be at the forefront of this year’s AACW Blues, Jazz & Gospel Fest, the music festival she founded here in 1997.

The festival, which returns this weekend, is the first since Patterson’s death in January at the age of 85. “I knew we had to do this one,” said Patterson’s daughter, Karen Patterson, who took on the responsibilities of lead organizer as her mother’s health declined in recent years.

The legacy of the woman known for her adage “everybody counts” will be recognized throughout this year’s event, which runs Thursday, Sept. 8, through Sunday, Sept. 11, and features a variety of activities and performances, several of which will be in tandem with Antioch College as part of the school’s 2016 reunion offerings this weekend. At the heart of this year’s festival, literally and figuratively, will be a community memorial service for Patterson, scheduled at 3 p.m. Saturday on the 2016 festival grounds at the John Bryan Center. Her family decided to wait to hold the memorial until the September festival, feeling it would provide an uplifting setting that would have made Patterson happy.

The loss of her mother remains heavy for Karen, but she said she is determined to keep her mother’s legacy alive. Putting on a festival this year not only provides a community forum to celebrate her mother’s life, but also helps ensure the continuation of the event, which has struggled in recent years with conditions outside organizers’ control. Last year, the weather didn’t cooperate, raining out much of the outdoor show and marketplace. Disappointed organizers had hoped for a big comeback after the event took a hiatus the previous year as Antioch College used the festival’s amphitheater grounds to construct its solar array in the adjacent open field.

Despite last year’s rains, Karen said she was happy that her mother got to see the festival continue. And she thinks Faith would be pleased by the variety of cultural activities on tap this year — and by the participation of several people involved not only in the beginnings of the festival, but also the beginnings of the nonprofit organization under whose auspices the festival was launched — the AACW. Founded in 1991 as African American Cultural Week, the nonprofit evolved over time into African American Cross-Cultural Works, dedicated to the promotion of diversity, community and education.

And this year’s four-day series of performances and presentations (see the sidebar on page 5 for details) echoes in many ways that first week of events 25 years ago. Organized by John Sims, a 1990 Antioch mathematics graduate, the week-long series was as a major component to a project that began by taking a group of Antioch students to various locations of black cultural significance in the deep South. Sims, a multi-media artist who will be returning this weekend to give two separate presentations, said he wanted to show the students — and the community — that you don’t have to go to Africa or the South to experience black culture. It’s where we live.

Speaking by phone from his current home in Sarasota, Fla., Sims said he’s looking forward to returning to town, sharing some of his current projects with the community and other Antioch alums and celebrating Faith Patterson’s life and work.

He said that he’s struck that “25 years later, we’re still dealing with similar kinds of issues” in the lives of black community members. As an artist, mathematician and political activist -— identities he said were developed and deepened as an Antioch student — Sims said he is interested in “connecting African-American culture to creating sort of rituals and things that continue.” AACW “would be an example of that,” he said.

Prior to Faith Patterson’s memorial on Saturday afternoon, Sims will give a public presentation on his 15-year continuing Recoloration Proclamation project, a series that has included the burning and burial of Confederate flags. The lecture will begin at 1:30 p.m. at the Arts & Science Building, room 219, on the Antioch campus.

Sims also will close the festival with a 7 p.m. Sunday presentation of AfroDixie-Remixes: Yellow Springs Listening Session. Part of an ongoing 13-year project, Sims has reimagined the song that has become aligned with the Confederacy, “Dixie,” using the various genres of black musical expression: spirituals, blues, gospel, jazz, funk, calypso, samba/bosa nova, soul, R&B, house and hip-hop. For listening sessions held across the country, he invites local poets and artists to be present and respond. Featured collaborators on Sunday will include Antioch alum Terri Blackhawk, former Yellow Springs News Editor Amy Harper, area-based poets Furaha Henry-Jones and Bomani Moyenda and spoken word artist Prophessor X. Veteran comic and Antioch alumna Karen Williams, who emceed at the first AACW, will be on hand to introduce the presentation.

“It’s exciting to come back and work with all sorts of artists, many of whom were there at the beginning of AACW,” he said.

Sims said he is dedicating his presentations to Faith Patterson as well as former Antioch music professor Bill Chappelle, who worked with Patterson until his death to continue the work of AACW. Sims will also be remembering his Antioch mathematics professor, Bill Houston, who died this past year as well. Houston was also an active supporter of AACW’s work until the end of his life, and his death, according to Karen Patterson, has been another big blow to the organization.

Sims said he hopes to help generate momentum in moving AACW into the future. “I hope the organization will continue to expand the work of Faith Patterson and Bill Chappelle and continue to grow and become a vital part not only of Yellow Springs, but the wider area. … It’s an important celebration and reflection,” he said.

“Faith Patterson was an incredible force in Yellow Springs and to be able to look forward and continue that work is an important responsibility. We can’t forget. We just can’t forget the folks who contributed.”