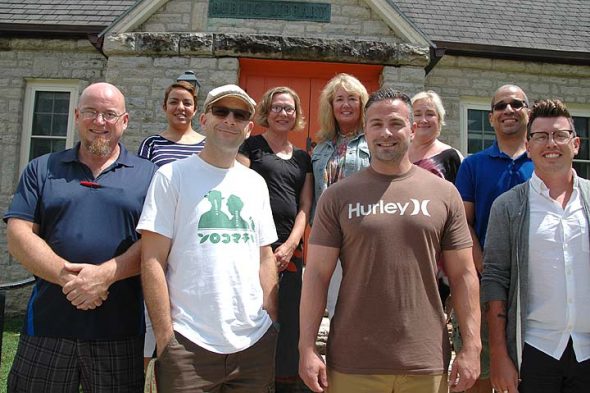 Last week, the News profiled five of the Yellow Springs School District’s eight newly hired teachers, based on brief interviews conducted during the group’s two-day orientation the week before. As the first week of the new academic year concludes, we present the final three, who will teach at Yellow Springs High School or McKinney Middle School.

A 1985 graduate of Yellow Springs High School, Jaime Adoff got a degree in music from Central State University before moving to his birthplace, New York City, to continue his studies at the Manhattan School of Music. A percussionist, he pursued songwriting and fronted his own band for eight years, releasing two CDs in the process.

Songwriting proved the entrée into the family business of book authorship. The son of the late distinguished author Virginia Hamilton and poet Arnold Adoff, Jaime Adoff’s first published book was a collection of poetry, “The Song Shoots out of My Mouth: A Celebration of Music,” in 2002. A young adult novel followed, then two more, as well as a picture book. In the meantime, he moved back to the Midwest and settled in Yellow Springs.

Before returning to school in 2011 to get a master’s in education from Antioch Midwest, Adoff traveled to schools and other organizations as a guest speaker, giving him practice in front of groups of young people. He’s spent the past three years teaching in Springfield, and was hired in Yellow Springs to fill the Language Arts vacancy at McKinney Middle School left by the retirement of Aurelia Blake.

“I’m really excited,” Adoff said. “My hopes are to really just come in with all my experience as a writer and time I spent in the classroom as a speaker [and that] will fit in with the PBL focus here in the district.”

He said he sees himself “as a co-learner” with his students. “Hopefully we’ll challenge each other.”

A village resident of eight years with a 5-year-old son entering kindergarten at Mills Lawn this year, high school social studies teacher Kevin Lydy said he is looking forward to teaching where he lives.

“That was one of the big incentives,” he said about leaving the Dayton regional STEM school where he last worked to take a position at Yellow Springs High School.

The district’s project-based learning program is not unlike his STEM school teaching experience, Lydy said.

“I’m excited about doing the kinds of projects we did there and getting involved in the community.” Community engagement is an important component of PBL, and Lydy said he is looking forward to being able to connect his students with his community.

The new Spanish teacher at the high school comes to Yellow Springs after 10 years teaching in Dayton and another year and a half in Springfield. Christopher Snider said his introduction to the language came in high school, and he “fell in love with it.”

Snider brings a teaching methodology known as “organic world language,” in which the classroom is “desk-free,” he said. “I do not have chairs, either,” he added with a smile. “Are you standing the whole time? No. Are you sitting on the floor the whole time? No. There’s a high emphasis on movement,” he said, noting a “correlation between movement and retention.”

He said this year, as his first in the district, “we’ll spend a lot of time developing a classroom community, as well as engaging in a PBL initiative.” For Snider, community-building and community-connection is vital to language learning. “Shockingly enough, it’s been absent from language communication for a long time,” he said.