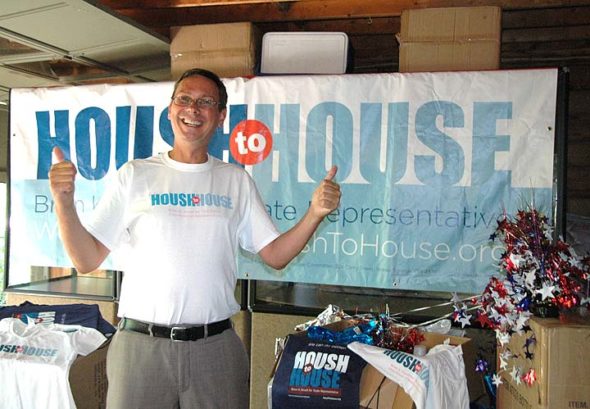 Villager Brian Housh is running as a Democrat for the 73rd district state representative seat against incumbent Rick Perales, a Republican. His campaign slogan is “Housh to House,” and his Pleasant Street home serves as his campaign headquarters. Housh’s platform emphasizes bipartisanship and focuses on issues of education, economic development and socially responsible fiscal practices. (Photo by Audrey Hackett)

‘Housh to House’ in homestretch

Brian Housh’s Pleasant Street home is his campaign headquarters, specifically his dining room, which on recent Friday featured a “Housh to House” tablecloth, plus stacks of postcards, door hangers, posters and brochures. The materials are by turns serious and playful; the posters, for example, feature a Superman-like figure opening his shirt to reveal an “H2H,” the abbreviation of Housh’s campaign slogan.

A newcomer to state politics, Housh is running as a Democrat for state representative for the 73rd district, which includes western Greene County. His campaign is a homegrown affair — colleagues, friends and family in Yellow Springs form the backbone of it, though Housh has support from local Democratic party leaders. In fact, it was House Democratic minority leader Fred Strahorn of Dayton who urged Housh last winter to run for the seat. Housh declined at first, but Strahorn was persuasive, and Housh came to believe he had a shot at winning against incumbent Rick Perales, a Republican in his second term.

“Over the course of five phone calls, I went from ‘no’ to ‘maybe’ to ‘yes,’” Housh recalled.

Housh was uncontested in the Democratic primary, so March 15 represented the true start of his campaign. He kicked it off with a party at the Little Art Theatre, where he works as operations and marketing manager. That’s in addition to his role as Midwest policy manager for Rails-to-Trails and his seat on the Yellow Springs Village Council, a position he’s held for three years. Asked how he juggles all these roles and a political campaign to boot, Housh replied that he is busy most nights and weekends.

On the Fourth of July, for example, he attended three parades in three towns: Fairborn in the morning, Yellow Springs in the afternoon and Beavercreek in the evening. “I was passing out Freezie pops and buttons all day. It was pretty fun,” he said with a grin.

Housh, 47, has a ready smile and energy to spare. As he enters the homestretch of the campaign, he’s going to need as much of both as he can muster. The 73rd district is only 38.1 percent Democratic, according to Housh. To win, he must appeal to a lot of independent, undecided and Republican voters. And he must do so during a year in which voters are both gripped and divided by presidential politics.

But Housh seems to relish the challenge of all that. He’s made “bipartisan collaboration” a theme of his campaign. “I would have liked to run as an independent,” he reflected, but political realities made that impractical. The impulse to bridge divides is strong in him, however; he came back to the theme again and again in a recent interview with the News.

“I’m not interested in vitriolic, divisive talk,” he said. “If you deliberate and really listen and factor in everybody’s thinking, you can come up with better solutions.”

Villager Linda Rudawski believes Housh walks his talk of bipartisanship. A social worker with a full-time job, she’s volunteered for his campaign since February, helping to organize and advertise several “Housh to House” events.

“He’s very much a collaborator and team worker,” she said. “It really is amazing how he approaches everything. He checks his ego at the door. … And he’s always calm and smiling.”

Entry into politics
Housh moved to Yellow Springs four years ago to be near family in town. (His brother, Matt Housh, is principal of Mills Lawn School.) A year into living here, already active in several jobs and volunteer service positions in the community, he decided to run for Village Council. He won a four-year seat, and discovered he enjoyed politics.

“I think I have the right kind of skill set,” he said. “Patience, tolerance and the ability to work with anyone.”

His background is eclectic. Housh grew up in West Carrollton, but lived outside of Ohio for many years. He has a B.S. from Cornell University, in industrial and labor relations, and two professional degrees, a J.D. and M.B.A., both from Tulane University. After business school, where he focused on social entrepreneurship, he took a job in Thailand — and ended up staying 12 years. He started a business there, a corporate training firm called English Solutions, which he ran until returning to Ohio in 2012.

In his present campaign, Housh is emphasizing a few key themes: innovative education rooted in the kind of inquiry-based learning that’s been implemented in Yellow Springs; economic development through infrastructure investment and job creation; and fiscal practices that give local governments the funds they need while at the same time promoting regional resource-pooling and collaboration.

“Local control is really important to me,” he said. “It’s the recognition that much of the important work in government is done at the local level.”

State government can do a better job of facilitating this work, Housh believes, by shifting funds back to local governments and giving them the flexibility to set policies that fit the needs of their communities.

“During my time on Council, I’ve seen how you can really do things that transform lives, that enhance people’s quality of life,” he said, citing as examples the creation of the local skate park and Council’s multi-faceted efforts to address affordability in the village.

Beyond showing him what local government can do, Housh believes his Council service has given him the political experience to “hit the ground running” at the state level. “I’ve learned a lot about all aspects of government,” he said.

On the campaign trail
It’s a rare day that Housh isn’t on the campaign trail, which means knocking on doors and speaking to dozens of local groups across the district, as well as organizing “big events” once a month, such as this week’s “Housh to House” party at Wright State University. When he’s out talking to voters, the “H” on his campaign button sometimes raises questions about whether he’s campaigning for Hillary Clinton. He’s a Hillary supporter, he said, but he’s sought to distance himself from presidential politics in this race.

“I try in my conversations to focus on what matters,” he said.

Though citizens may start out talking about how much they despise Trump or Clinton, patient listening and questioning “peels the onion,” Housh said, revealing concerns about education, jobs, the cost of living and the environment.

“They’re talking about quality of life issues, which is ultimately what people care about,” he said.

At campaign events, Housh engages in a “What Matters to You” exercise, encouraging citizens to identify priorities from his list of core issues and to add their own. The point is to listen to people, he said.

“People have concerns, and you have to get past the divisive rhetoric to hear them.”
Villager Sandi Sharp, who works in elder care and is another Housh campaign volunteer, said Housh excels at doing just that. “He truly listens to people. Most politicians start yaking about their own agendas, but listening is what this position is supposed to be about.”

Partisan loyalty remains strong in the electorate, however. In heavily Republican Greene County, it can be hard for a Democratic candidate to gain traction. Villager Wayne Gulden, a retired network engineer who is volunteering as Housh’s campaign treasurer, jokes that a “Democratic-friendly precinct” in Beavercreek is still “two-thirds Republican.” Raising money outside of Yellow Springs has been tough, he said.

Housh confirmed that fundraising is the most difficult part of the campaign. He was told by area Democratic leaders that he needed to raise $100,000 to fund his race; he’s raised about a quarter of that so far, he said, some of it from his own limited resources.

But he doesn’t regret his decision to run. “I’ve been approached by lots of people with small personal problems they hope government can help them solve.” That aspect of campaigning has been moving, he said.

Election day, and beyond
Win or lose, Housh believes his presence in the race is making a difference. Two of his campaign slogans, which are also Twitter hashtags, are #WeCanDoBetter and #EndTheParalysis. Housh said he’s stayed away from negative campaigning, focusing instead on people’s concerns and his own priority issues. He senses that some voters come away from his events with “some optimism or a belief that we really can do better.”

If he wins in November, he would continue to live in Yellow Springs, but would spend a portion of his time at the State House and around the district. He would not be able to finish his last year on Village Council, per state law regarding public officials holding dual public agency roles. “That would sadden me. I’ve loved [Council service] overall,” he said.

If voters don’t take a chance on a Democratic newcomer, however, Housh is not done with public service. He is contemplating another run — for Greene county commissioner. There are three county commissioners. Candidates are vying for two seats this November; the third seat will open in 2018.