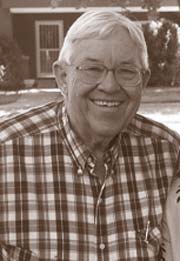 John E. Hart Jr., former deputy director of support systems engineering at Wright-Patterson Air Force Base, seven-term Miami Township Trustee and long-time Yellow Springs resident who led the fundraising campaign for the Xenia Avenue library and brought circuses to town for more than three decades, died Monday, Aug. 22 in Cincinnati after a long illness. He was 84.

A native of Long Island where he swam as a child in the Sound with his pet ducks and dog, John attended Antioch College, graduating in 1954 with a dual degree in mechanical engineering and business management. John decided to stay in Yellow Springs because he fell in love with local resident Joanne Katon, his wife of 44 years until her death in 2004. He soon became involved in the village’s community and political life, where he remained actively involved until he retired to Florida in 2015.

After college, John began his 32-year career at Wright-Patterson as an Army Air Force specialist who serviced crash trucks. Returning to civilian life, he worked his way up to head the base’s support systems engineering directorate in the aeronautical systems division, where his staff of 300 people maintained all mechanical devices. He joked that his department was responsible for the functioning “of everything from the planes to the toilets” at the base. During his tenure from 1983 to 1987, he oversaw improvements in the support systems for the B1-A, B1-B and B-52 bomber programs, the Short-Range Missile Attack System (SRAM) and the C5-A and C-141A cargo plane programs.

After retiring from the base, John became associate to the dean of the college of engineering at Ohio State University, retiring in 1993.

John was a leader and member of a variety of professional organizations, including the Institute of Electrical and Electronics Engineers, a nonprofit dedicated to advancing technology to benefit humanity; the American Society for Engineering Education; the American Institute of Aeronautics and Astronautics; the Society of Automotive Engineers; and the President’s Club of The Ohio State University for his devotion and contributions to the cause of higher education. In 1982, he was a session chairman for the IEEE’s International Automatic Testing conference held at the Dayton Convention Center.

John came to public office in Yellow Springs through his dedication to the volunteer fire department and emergency squad, where he served for three years. He ran for Miami Township trustee in 1961 at the urging of his fellow volunteers who felt the department’s funding was being slighted. Promising to put his engineering and management skills to work for local residents, he was elected trustee with the most votes of any candidate for any local office that year. After serving seven terms as trustee, ending in 1989, John said he was proudest of having made sure every road in the township had been paved.

In 1979, through the U.S. Air Force and the Intergovernmental Personnel Act, John took a leave of absence from Wright-Patterson to fill an urgent vacancy as interim Village manager of Yellow Springs for a year.

Having grown up Republican in a family of business people, John said he “was converted” to the Democratic Party by his first wife’s father and ran for trustee as a Democrat. Soon after his retirement from the base in 1987, he was appointed to the Democratic Central Committee of Greene County.

John was twice named a Fellow of the Lions Club International Foundation for his fundraising efforts toward diabetes research and college scholarships for Yellow Springs youths. To that end, starting in the early 1970s, he brought in more than a dozen circuses to town over a 35-year-period. He was a long-time member of the Circus Fans of America and the Circus Historical Society and was a regular contributor to Circus Report magazine.

In 1964, as the local Jaycee’s general chairman, John led the campaign to build the Yellow Springs Community Library at 415 Xenia Ave. With a goal of raising $50,000, it was the second largest project funded by community sources next to the acquisition of Whitehall Farm.

John was one of the first two white members in 1997 to join the Yellow Spring’s Men’s Group, a police-community organization devoted to improving the political, economic and educational lot of young blacks that now is known as the James A. McKee Group.

John’s other lifelong passions included tinkering with limited edition autos and classic cars, exploring the offerings of Chinese restaurants in nearly every town or city he visited, and international travel.

John was fortunate to fall in love and marry again after meeting Bari Lowenthal Maxson of Lexington, Ky., in 2007. They spent the next eight years of their lives together and traveled to many parts of the globe.

Memorial services will be held Sept. 24 at 11 a.m. with a lunch immediately following, both held in Yellow Springs at Glen Helen’s Vernet Ecological Center. Donations on behalf of John can be made to the Glen Helen Nature Preserve (glenhelen.org) and Hospice of Cincinnati (hospiceofcincinnati.org).