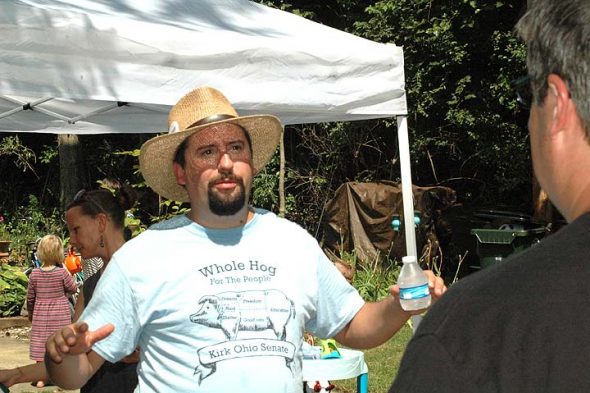 Yellow Springs resident Matthew Kirk spoke to a supporter at a fundraiser he recently hosted in his backyard. Kirk is seeking a seat in Ohio’s state senate, representing the 10th district. A Democrat, Kirk is running against Republican Bob Hackett in a traditionally Republican district. It is Kirk’s first run for office. (Photo by Dylan Taylor-Lehman)

On a recent weekend in Yellow Springs, the backyard of Matthew and Kristina Kirk was abuzz with family, fellow Democrats and a growing pile of items to be sold at an upcoming yard sale. Matthew Kirk is running for a seat in Ohio’s state senate, and the yard sale donations were collected to raise money for his campaign. The event was also a barbeque, which allowed for people to meet Kirk over the universal pleasure of eating.

Kirk is a first-time contender for office, and as a “down ballot” candidate — one listed toward the bottom of the ballot — he is responsible for much of his own fundraising and campaigning. He launched his campaign in February of this year. He is running against Republican Bob Hackett for the state senate seat representing Ohio’s 10th district. The district includes all of Greene, Clark and Madison counties, as well as the cities of Beavercreek, Bellbrook and West Jefferson.

The process of running, from setting up a booth at county fairs to attending press conferences, has been an eye-opening experience, and a tremendous amount of work. Kristina Kirk, Matthew’s wife, said it’s been “all go” after getting the 50 signatures required to run for office. Much of his strategy he has learned by doing: he has taught himself graphic design and how to work social media, for example.

“Running this race is kind of like being a one-man band,” he said recently.

The yard sale fundraiser was something he developed as a way for people to help his campaign without being asked to reach for their pocketbook, he said. And the contribution is tax-deductible, he added.

Kirk moved to Yellow Springs two years ago with Kristina, an ER doctor at Dayton Children’s Hospital, and their two kids. Prior to that, they lived in Columbus, Kirk’s hometown. “It was a bit of culture shock” moving to a small town, he said, adding that he and his family have come to love village life.

He’s always been interested in the role of government, he said, which in his mind is to “help people.” On his website, http://www.kirklovesohio.com, he writes, “Some people are into cars, or guns, or gardening. I am into government innovation.”

Kirk believes he has a “unique perspective on the greatest challenges” local communities face, partly as a result of his business development experience. Politicians on both sides “are disregarding the real problems and talking in binary ways,” he said, and he hopes to offer an alternative.

“We live in communities segregated along economic and racial lines,” he observed. “This translates down into the problems we see — social problems, economic problems.” More empathy and understanding is needed, he said, and that’s one reason why he’s taken a strong stand against Donald Trump.

“I don’t have disdain for Republicans,” Kirk said. “I can find common ground and solutions with anybody.” But Trump, he believes, is “leading the conversation in unproductive ways.”

One feature of Kirk’s campaign has been “Trump is Trash” bags, white garbage bags printed with those words. It’s a playful gesture with a serious message, he said.

“I find Trump to be truly offensive,” Kirk said.

Yet he believes Trump is tapping into real economic fears, and Kirk is passionate about the struggles of working-class people, especially their need to earn a “dignified wage.” His background in business development has given him insight into the economic concerns of both people and municipalities, he said. Based on dozens of conversations with Ohio companies, he  believes businesses are drawn to locate in a community because of the local workforce — access to workers who can do the job. And this means that education is so important, he said. Ohio’s schools are “not necessarily educating people for the current workforce,” he said.

His campaign platform also includes more equitable opportunities for business development, as Ohio’s business development programs typically help small businesses, he said, but not the medium-sized and agricultural-based businesses that would make sense in his district. At the same time, he’s concerned that the heavy emphasis on big agriculture is limiting the number of farmers and shutting out small family farms that could be diversifying food output in the state.

Kirk believes his experience collaborating across agencies and bringing people with competing interests to the table will help him explore and implement these and other ideas.

“I do have the experience working across multiple agencies and with local governments,” he said. “I have an understanding of how the work itself gets done.”

Ohio’s 10th district has around 350,000 residents, and has traditionally been a Republican stronghold. Kirk said his campaign has a bit of an underdog feel, as he is relatively young (34) and is running as a Democrat in an area where Republicans on the ticket have often run uncontested.

Kirk found he was a bit naïve when he began his campaign, as he underestimated the variety of constituencies and the difficulty of trying to appeal to each one. Democratic candidates can count on support of their fellow party members, he said, but in an area with a paucity of Democrats, part of the challenge has been appealing to undecided voters or Republicans wary of voting for Trump.

But because Trump and Clinton have been such divisive figures, Kirk feels that voters “have been cheated” this election cycle of substantive policy conversation. It has been hard for candidates of both parties to distance themselves from the reputations of the presidential contenders and engage with voters on issues directly relevant to their lives, he said, such as improving healthcare and education infrastructure.

“In politics, it’s about wedge issues,” he said. “You don’t have to talk about the things that really matter.”

But he has been able to have old-fashioned one-on-one discussions with constituents. He has embarked on a few door-to-door outreach efforts, and has been a presence at regional events like the upcoming Beavercreek Popcorn Festival and Enon Apple Butter Festival. He recalled speaking at length with an educator at the Clark County Fair who was traditionally aligned with the Republican party but found herself swayed by their conversation about education.

“I truly believe I can work with anyone,” he said. “We have the opportunity to lead the party in a new direction.”

As a first-time politician, part of the daily routine is getting his name out into the public sphere. In fact, establishing one’s name is the hardest part about being a newly full-time politician, he said.

Kirk has answered many interviews and questionnaires from special interest groups ranging from the League of Women Voters to the NRA. He is currently endorsed by the Ohio Education Association, the Ohio Civil Service Employees Association, Ohio Association of Public School Employees, Planned Parenthood and other organizations that typically support Democrats. Such endorsements don’t necessarily result in financial contributions to his campaign, but they are very valuable as they include his name and information in their campaign literature. College Democratic groups from the University of Dayton and Wright State have helped him out as well.

“[Democratic party] people have been very supportive,” Kristina said, noting that people from both the Sanders and Clinton campaigns have helped with his campaign.

Kirk has made a point to support fellow Democratic candidates in turn. On a recent morning, he attended a press conference called by several state Republican leaders to criticize Democratic candidate David Sparks. The prevailing tone was negative, he said, but he decided to attend in order to lend moral and strategic support to Sparks.

Kirk has tried to keep people interested and involved in his own campaign without resorting to insults, he said, though he acknowledged that his Trump stance might be perceived as negative. While it’s easier to get someone riled up by talking about the perceived negative traits of a party or a person, he wants his name associated with earnestness and optimism. That is why his website is “kirklovesohio.com,” he said, and why his new batch of yard signs will feature his name, a heart and the state outline.

In fact, it was Kirk’s positivity that sparked local resident Zo Van Eaton’s interest in his campaign. She attended his barbeque after seeing how he responded to some political comments on the page of a local Facebook group.

“He kept it positive,” Van Eaton said. “It was very respectable how he handled it.”

As November draws closer, Kirk’s workload will only increase. There are more signs to be posted, more doors to be knocked on and more Facebook ads to be purchased. People respond to a sense of urgency, he said, both the candidate’s and their own. He will also be coordinating leafleting efforts with other Democratic candidates.

“If you’re handing out one piece of paper, hand out two,” he said.

Kristina Kirk said that she will be helping in any way she can. She has enjoyed engaging with people in their immediate community, though she said she isn’t quite as comfortable in the public sphere as her husband.

“I’m not a social person, so the whole process has been pretty ‘interesting,’” she said, with a laugh. “But of all the things he’s best suited to do, this is it.”

While it’s impossible to predict the results of the election, Kirk remains optimistic about the outcome of his initial run for office.

The general election will be held Tuesday, Nov. 8.