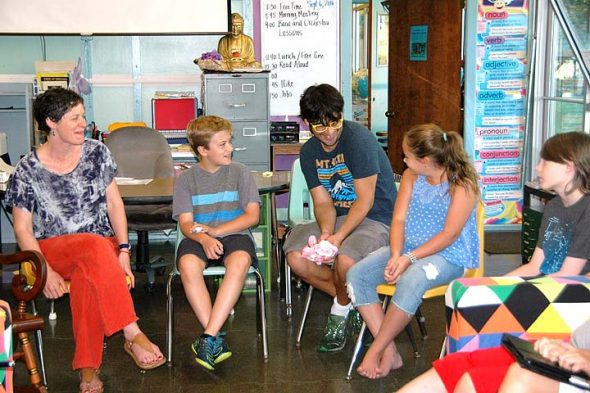 Everyone has a turn to talk and share during the daily morning meeting of the Antioch School’s Older Group. The OG has a new teacher, Sally Dennis (far left), and teaching assistant, Matt Moon (third from left) this year. Student Luka Sage-Frabotta sits between them during Tuesday's meeting time; classmates Mia Florkey and Luca Acheson sit to the right. (Photo by Carol Simmons)

When Chris Powell retired last spring after 28 years as the Older Group teacher at the Antioch School, imagining someone new stepping into her room as lead teacher may have seemed hard.

However, School Manager MJ Richlen said after three days of classes this fall that the transition was “going beautifully.”

But then you can’t really call Sally Dennis “new.”

A parent of fifth-grader Lucy and first-grader Oskar, as well as the Older Group teaching assistant for the past three years — not to mention a volunteer in the music and theater programs before that — Dennis (“Sally,” to her students and the rest of the Antioch School community) is a familiar face.

While she is newly certified as an elementary school teacher, having last year completed her master’s degree in education at Antioch Midwest as well as her student teaching requirements in Beavercreek Township, she also has a variety of classroom experience.

A native of Kent, Ohio, Dennis said she first came to this part of the state as a student at Wittenberg University, where she studied music. Her principal area was voice. She then went through Montessori teacher training at Walsh University in Canton, Ohio.

After college, she moved to Boston, where she taught theater arts in a Montessori elementary. “My now husband and I founded a theater company there. We made theater, and I taught theater.”

After marriage and the birth of their daughter, the young family moved back to Ohio. “We wanted to be close to family, so we came back,” she said.

“I was a mom,” Dennis said of that time during which she “also taught some classes for YS Kids Playhouse and taught Kindermusik.”

After another brief stint in Boston, she said they returned to Yellow Springs “just in time for the [Antioch School] spring musical.” Chris Powell called and asked for her help, she said. “That was my first time spending every day with the Older Group. I already knew I loved this age group after working with this age in Boston.”

Fourth through sixth grade is the typical Older Group makeup. This year’s class has 21 students, one of whom is temporarily out of the country, Dennis said.

The classroom is lined with cases full of books and individual desk cubicles decorated to suit their owner’s style and interests. A row of ukuleles hang from a far wall. A baby-grand piano — once belonging to the well-known late local pianist and teacher Ava English — as well as three small brightly colored couches fill much of the center of the room. The décor, musical instruments and educational materials remain from Powell’s tenure. A dry erase board on the wall lists the day’s activities. Tuesday’s itinerary: free time, morning meeting, band and orchestra, lunch/free time, read aloud, hike, jobs.

“Typically, in the morning, we do a lot of smaller group kinds of lessons — math, language arts,” Dennis said. “Afternoon has a bit more project time and larger group lessons. This time of year, we try to give a lot of free time and play” as the students readjust to the school day.

She said she appreciates the flexibility that the Older Group’s three-year program allows. “Coming right out of graduate school, I’m very aware of the state standards. [Here] it’s OK if they don’t cover Ohio history in fourth grade as long as they get to where they need to be by the end of sixth grade.”

She said she also appreciates the teaching team with whom she works. Matt Moon, also an Antioch School parent, is the new class assistant. “He’s worked in other schools,” Dennis said. “He has experience at Montesorri schools and a school for the blind. He’s here every morning for the small group time.”

Looking ahead to the coming months, she said that the class will be learning Spanish with a woman from Wright State, and she knows the November election will generate some good lessons. “Fourth-, fifth- and sixth-grade students are very interested in our election process.”

How that exploration will look is yet to be determined, as the school’s model is based on a student-led approach. “It will be interesting where they take it — if they want to do mock debates or if they’ll be more interested in how the government works,” Dennis said. “These are the sorts of things where I follow them.”

Dennis said she loves that sense of mutual learning and discovery. “A lot of time, something totally unexpected comes up, and it’s amazing and fascinating. And I really do love that it’s not something I might have thought of.”