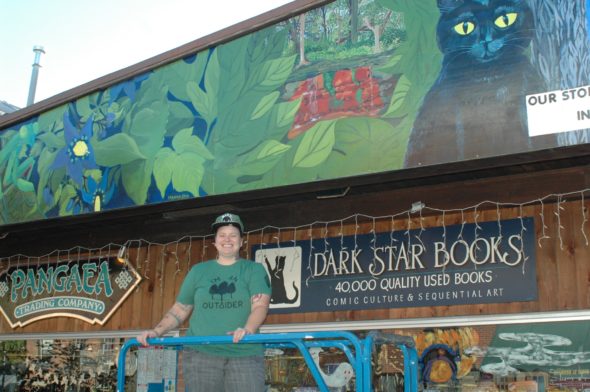 Yellow Springs resident Mandy Knaul is a farmer. And a writer. And half a dozen other things, including an artist. Back in the 1990s, she started out at Antioch College in the art department, then switched to the social sciences. But art remained a cherished, if private, creative pursuit.

Last Thursday, Knaul — who goes by Mandy Sue — went public with her artist persona in a big way.

Dark Star commissioned the piece last year. After the Village took down the Bradford pears along Xenia Avenue, the facade felt “shockingly exposed,” said Kate Mooneyham, manager of Dark Star. Rather than simply paint the boards a solid color, Dark Star decided to commission a mural. Mooneyham put a “shout out” on Facebook, and several villagers were interested. But only “Mandy Sue was passionate enough to do it,” Mooneyham said. “She had a vision.”

The subject matter was up to the artist. Mandy Sue, trained in horticulture and a lover of the natural world, chose scenes from the Glen and vivid renderings of local flora and fauna — including Mr. Eko, resident cat and mascot of Dark Star. No small cat in real life, he’s even larger than life here, with a liquid golden gaze.

Why the Glen? The mural itself answers the question. “Our story began in the Glen…” it proclaims. “Yellow Springs is Yellow Springs because of the Glen,” Mandy Sue said this week. The center panel includes a depiction of the rust-colored spring that gave the village its name.

It took Mandy Sue about eight months to paint the mural, not including research and prep work to determine the best materials for an outdoor installation. Her next-door neighbor and dear friend, John Geri, helped with the carpentry aspects, and provided moral support (disguised as banter and teasing).

This Thursday, the mural went up, all seven panels of it. Geri and Mandy Sue installed the piece, working from the elevation of a rented scissor lift to bolt the panels in place. Mandy Sue’s wife, Theresa Nolan, lent enthusiasm and a helping hand, as did the artist’s mom, niece, grandniece and various village friends. Passersby paused to admire the effort. One observer worried that the mural would get damaged when it rained. Mandy Sue reassured her that the artwork was protected by two layers of varnish, with a third to come after the final finishing touches.

And there will always be final finishing touches, Mandy Sue said. The piece, so long in the making, might never be, or at least never feel, truly done.

Nolan, too, seemed to be experiencing some separation anxiety. How odd it was to have the mural leave “the intimacy of our house” and enter the public eye, she said.

But the mural is up — its new home is the village, and now it belongs, in the best spirit of public art, to all of us. 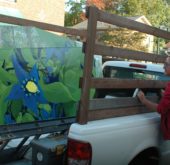 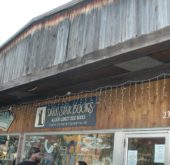 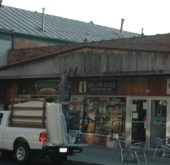 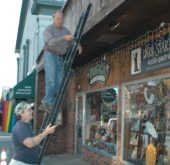 John Geri and Mandy Sue shared one of many laughs during the installation. 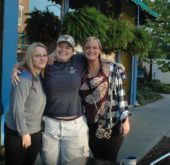 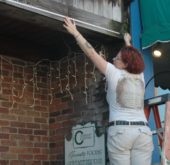 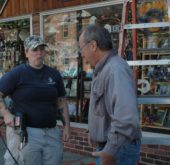 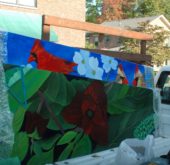 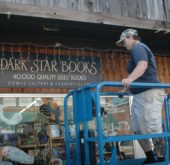 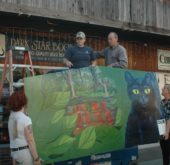 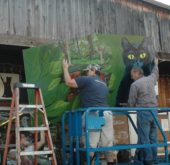 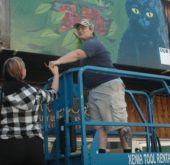 Mandy Sue and her niece. 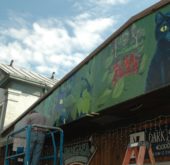 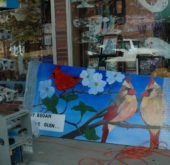 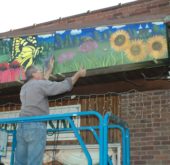 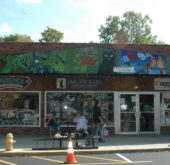 View from the across Xenia Avenue. 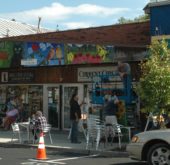 The final panel didn’t quite fit, so it got taken down again and trimmed. 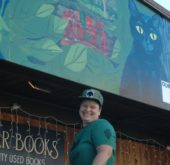 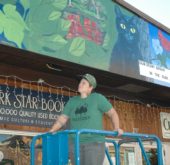 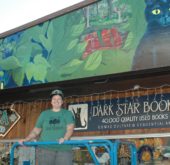