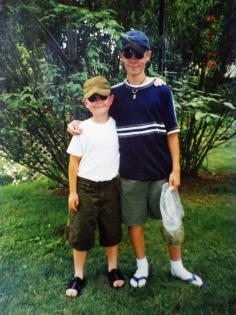 Yarn Registry – Can Older Brothers be Trusted? (Probably not.)

When I was younger, I would try to get my brother to believe outrageous things. I made a game out of seeing what “fact” I could pass off as real. The idea was to tell him something plausible enough to sound legit but ridiculous enough that if he believed it, he would look dumb and I would look hilarious.

I was able to pull this off thanks to my status as the older brother. It wasn’t a matter of adoration or that he thought I was an implicitly trustworthy guy, just that some knowledge could be assumed because I’d been around longer.

The first thing I remember trying to get him to believe was the existence of a giant map. But the map wasn’t just giant – I told him a guy in Arizona had a 1:1 scale map of the world. Essentially, some guy out in the desert had a map that if unfolded would be the exact size of the Earth.

I didn’t include many more details than this. Repeatedly insisting one thing was true was more effective than laying out a lot of evidence for it, as I realized that the more info you include, the more info you have to account for. The lack of details worked in my favor, and my little brother went from refusing to listen to me to believing there was a giant map.

The next thing I got him to believe was that they were building a bridge to Hawaii.

Later I told him that his favorite train company CSX sold out to a bigger company.

Another strategy I employed was not telling him these things very often. A well-placed story every couple of months was easier to pass off as true. An outright lie wouldn’t be expected if mixed in with other (actually true) facts. Over the course of a few years I also told him:

The stories would only go on for few minutes before I couldn’t hold it in any more, or until he’d get sick of being strung along and go confirm the truth or lack thereof with my parents. They’d laugh and gently tell him I was an idiot.

To be fair, in most circumstances he wasn’t that aloof. He was always at least 25% skeptical of my claims. After a few years he stopped believing anything I said at all, even if it was something basic, like what we were having for dinner or something funny someone said at school. I ended up having to work just as hard to convince him I was serious as I did to convince him of something implausible. I still have to swear up and down how honest I’m being, even about things that wouldn’t ever demand that level of scrutiny.

Much to his credit, however, he has been able to exact his revenge.

Once my family and I were all driving somewhere on vacation. We were talking about animals and my brother told us an interesting fact.

“Did you know that a group of flamingos is called a ‘plantikon?’” he asked. “A plantikon of flamingos – like ‘a crash of rhinos’ or ‘a murder of crows’?”

He was interested in animals from an early age. He worked at an open-air nature park at the time and was considering going to vet school. We had no reason to doubt him.

“How interesting,” we all agreed.

He closed his eyes, bit his lip, and looked around at all of us to make sure we fully believed him.

He yelled almost with relief, but there was a healthy – and deserved – amount of gloating as well. He was vindicated. He got me back for years of half-baked factoids and he got my parents back for laughing at my mendacities. His joy was infectious and we all laughed at ourselves.

More recently, he got me again. He was in Omaha, Nebraska for a couple weeks of job training and sent me a picture of a statue he found when he was out exploring. It was a little girl smiling 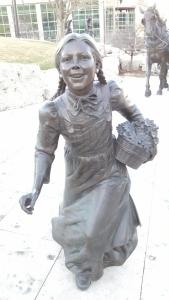 and running and holding a basket of flowers.

He said the city is basically overrun with statues and explained why he sent me a photo of that one in particular: ‘So apparently in Omaha back in the mid-1800s there is a really famous case: a girl was brutally murdered in public, then roasted and eaten by her crazed family.’ He then quoted the plaque: “This statue is a memorial to that horrifying event.”‘

I asked whether the statue was a memorial to the event or the girl, as I thought it odd that the people who built the statue would inscribe it so ambiguously.

“To the girl. My bad, I was paraphrasing.”

Woah, I said. Weird commemoration. You rarely see a statue that so openly discusses an event like that. I told him as much and even started to type “Glad you made it safe!” when he called me.

“HAHAHAHAHAHAHA!!! Got you! GOT YOU! Yorrrrrre DUMB!” (The ‘you’re dumb’ was drawn out and exuberant, like an umpire relishing the chance to call someone out.) “Of course that girl wasn’t eaten by her family! That statue commemorates the bravery of pioneers. I can’t believe you would think they would make a statue for the cannibalization of a little girl! HAAAAAH!”

Again, his laughter and celebration was infectious and I laughed at my own gullibility. I imagine I’ll have to dust off my lying abilities and get him back soon. (Everyone else can trust me though!) I expect this will go on for a long time. In fact, once when my mom was going to the dentist she saw two eighty year-old men walking across the parking lot. One abruptly cut in front of the other and made him stumble. They laughed and the stumbler pushed the guy who cut him off. One of their wives was with them and rolled her eyes.