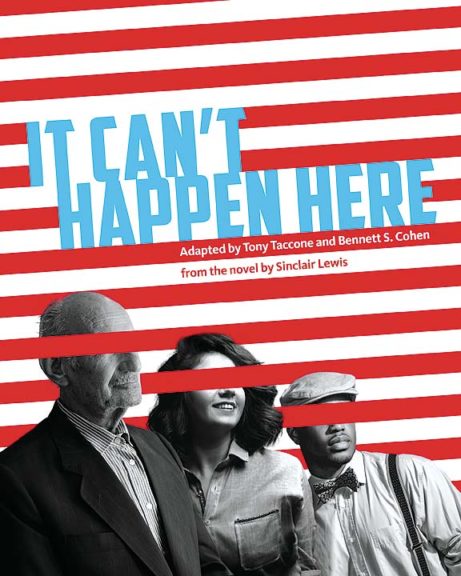 Yellow Springs is taking part in a nationwide staged reading of a new adaptation of Sinclair Lewis’s political novel, “It Can’t Happen Here.” More than 40 venues will host readings of the play on Monday, Oct. 24, with our local reading scheduled for 6 p.m. at the Yellow Springs library. The Berkeley Repertory Theatre in California is organizing the nationwide event; Yellow Springs organizers are Ara Beal and Lorrie Sparrow-Knapp. (Image courtesy of the Berkeley Repertory Theatre)

It can’t happen here. Or can it?

A prescient novel from 1935 is getting new life as a touchstone for our current presidential season. When Sinclair Lewis wrote “It Can’t Happen Here,” fascism was advancing in Europe and a fiery populist, Louisiana’s Huey Long, was running for president at home. Lewis’s dystopic novel charts the rise, rule and fall of a fictional demagogue, Buzz Windrip, who blusters and bullies his way to the White House, promising prosperity and a return to American greatness, only to impose martial law.

Lewis adapted the novel into a play under the auspices of the Federal Theatre Project, and productions of the timely drama opened in 21 cities across the country on Oct. 27, 1936. The play continued to run through the 1930s, with one production even featuring Lewis himself.

Flash forward 80 years. A new adaptation of “It Can’t Happen Here” — timed for another presidential election — opened at the Berkeley Repertory Theatre in Berkeley, Calif., earlier this fall. As part of its run, the Berkeley Rep is organizing a free nationwide reading of the play.

For one day only, on Monday, Oct. 24, libraries, theaters and universities around the country will be hosting staged readings of “It Can’t Happen Here.” More than 40 free readings have been scheduled to date, according to the Berkeley Rep website this week, including one at the Yellow Springs Community Library at 6 p.m. — the only reading in Ohio.

Two local theater people, Ara Beal and Lorrie Sparrow-Knapp, are responsible for organizing a reading in Yellow Springs. Beal, a local librarian and artistic director of Yellow Springs Kids Playhouse, said the play offers “a different way to reflect on current events.” When she heard about the project through the American Library Association, a collaborator in the endeavor, she was “excited about connecting to history and to other communities” through a nationwide reading that echoes the simultaneity of the play’s original opening, she said.

Sparrow-Knapp, artistic director of Yellow Springs Theater Company, was struck by the relevance of the play to today’s political context. “It was chilling,” she said of recently reading the script for the first time. But she also found Lewis’s semi-satirical depiction of demagoguery enlightening.

“Lewis does an amazing job of representing why people would vote for a demagogue,” she said.

In one scene early in the play, Lewis offers a chorus of reasons why citizens of fictional Fort Beulah, Vt., are throwing their weight behind candidate Windrip:

“Buzz tells it like it is. You have to respect that.”

To some contemporary readers of the play, the parallels to Donald Trump’s candidacy will be obvious. (The play was adapted by the Berkeley Rep during primary season, with Trump’s particular brand of populist politics gaining traction.) Sparrow-Knapp said she’s an open supporter of Hillary Clinton, and is deeply concerned about Trump’s impact on the nation. But the aim in organizing the local reading of “It Can’t Happen Here,” far from belittling Trump supporters, is to attempt exactly the opposite — to increase empathy and understanding across the political spectrum. To that end, Sparrow-Knapp hopes the reading will attract people with a range of political views.

Monday’s reading is open to everyone in the community, as audience members and readers. No acting experience is required, and there will be no rehearsals prior to the reading. The play has many roles, and local readers may find themselves “performing a role you don’t like” in terms of a character’s political outlook, Sparrow-Knapp said. “The value is to live there for a while.”

One casualty of fictional candidate Windrip’s rise is civil discourse, which deteriorates into name-calling, intimidation and violence during the course of the play. Both Beal and Sparrow-Knapp said they see a similar substitution of crude entertainment — “bread and circuses,” Beal said — for civil discourse in this year’s election. And they believe that theater, though itself a form of entertainment, can help revive such discourse by creating shared experiences and a space for working out ideas.

“Theater lets you live inside the big questions,” Sparrow-Knapp said. “Politics and theater have gone together for a long time — and they go well together,” she added.

Beal said the Federal Theatre Project, a New Deal program, was the closest thing our country ever had to a national theater. It was radical for its time, bringing together black and white actors and staging overtly political works like “It Can’t Happen Here.”

“I’m a theater history buff, so I really plug into the history of this reading,” she said.

And then there’s the play itself, which over the course of 120 pages, or about two hours, plunges the reader into a world of escalating political consequences — partly as a result of the naïve belief that “it can’t happen here.” It ends with just a glimmer of hope, courtesy of exiled journalist Doremus Jessup and his family, who have the play’s last words.

“It’s a heck of a play,” Sparrow-Knapp said.

The local staged reading of “It Can’t Happen Here” will be performed Monday, Oct. 24, at 6 p.m. at the Yellow Springs Community Library. Those interested in reading may email admin@yskp.org or ystheatercompany@gmail.com or call 937-767-7800 for more information or to RSVP. No acting experience is required. Attendance is free.