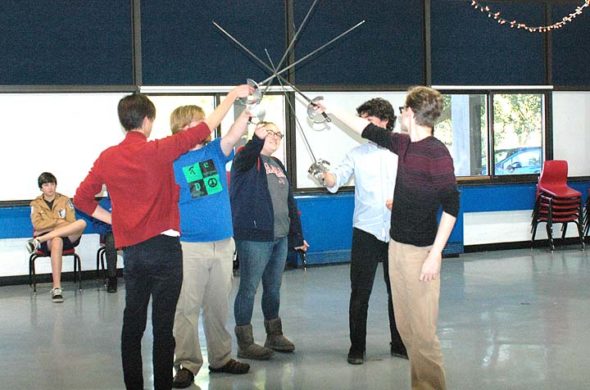 All for one … heck of a YSHS play

Fighting, honor, loyalty, love, camaraderie. More fighting. This fall’s Yellow Springs High School production of Alexandre Dumas’s “The Three Musketeers” is not for the faint of heart. But it’s equally full of comedic turns, played to the hilt by a tight troupe of young actors whose rallying cry could be the musketeers’ own: “All for one and one for all.”

The play is “really ambitious,” said Lorrie Sparrow-Knapp, who is directing the show, with Ara Beal as producer. The pace is fast, and “there’s a fight in every scene.” But the violence is stylized. “It’s a live comic book,” she said.

And that’s a big part of the play’s appeal, for audiences and actors alike. “It’s super fun to watch as an audience,” Sparrow-Knapp said. For the young actors, the fighting is fun, scary and empowering, all at once, she said. “Stage combat is about learning control, collaboration, cooperation, communication. It teaches discipline.”

As she did in last fall’s production of “Macbeth,” Sparrow-Knapp has brought in Chicago-based stage combat teacher Neil Massey to work with the students on the fight scenes. The stylish swords used in the show are from Massey’s company, Rogue Steel, which provides stage combat weapons to theaters worldwide.

“I love sword fighting,” said junior Jonah Trillana, who plays musketeer Aramis. At a recent rehearsal, he described the movements as more akin to dancing than fighting. “I love that a professional came in to teach us,” he added.

Most audiences are familiar with Dumas’s “The Three Musketeers.” Set in the early 1600s, the play tells the story of a young man from the provinces, D’Artagnan, who sets out to Paris in hopes of becoming a musketeer, one of an elite group of fighters charged with defending the king’s interests. He quickly tangles with the three musketeers of the title — Athos, Porthos and Aramis — as well as with scheming Milady and sinister Rochefort, both operatives for Cardinal Richelieu, who seeks to undermine the king. Complicating his predicament, D’Artagnan also falls in love with two women simultaneously: malevolent Milady and her angelic counterpoint, Constance, the queen’s maid.

While the play is traditionally male-centric, the high school is using a new adaptation, by American playwright Ken Ludwig, that gives the action a feminist twist. Specifically, Ludwig has written in a new female character, Sabine, sister to protagonist D’Artagnan. Disguised as a male servant, Sabine accompanies her brother to Paris, has adventures of her own and ultimately proves her worth in an epic fight that closes the play.

“It’s a fabulous adaptation,” said Sparrow-Knapp, noting that it had its world premiere a decade ago at the Bristol Old Vic in England.

Allison Bothwell plays Sabine, and feels connected to the character. “She’s 17, my same age, and is stepping out into the world, as I will be doing when I go to college,” Bothwell said. This is the first “big role” for the senior, who has been acting since she was in seventh grade. “It’s a big step forward, but I’m definitely ready,” she said.

Junior Grant Crawford, who plays idealistic adventurer D’Artagnan, also feels a sense of connection to his character. “I can relate to the naiveté he shows, and how he’s trying to become a better person,” he said. The role is “very challenging — there are lots of lines, lots of things to do,” Crawford said. “But it’s a good challenge.”

Other actors in the 30-member cast, which includes eighth graders through seniors, are finding their way into characters very different from past roles, and from themselves.

“I usually get cast as the nice girl,” said senior Shekinah Williams, who is taking the character of Milady by storm in this production. “Here, I’m evil and cunning — and I really like it! I’ve never connected to a character more,” she said, grinning.

Junior Greta Kremer has had to wrestle a bit more with her character, Cardinal Richelieu, a villain in the world of the play. “He’s hard to relate to,” she said. “But I’ve figured out that he believes he’s a good guy and is doing what he does to save France.” That knowledge helps her play the role with empathy, she said.

“Greta wanted a challenge, and she got it,” Sparrow-Knapp observed.

And the three musketeers have their own challenges, largely of the swashbuckling variety. How much action can they pack into two acts? A lot, said senior Duard Headley, who plays Porthos. “It’s the lighter side of acting. He’s a really jolly character” — though still quick to draw his sword. Senior Windom Mesure’s Athos is more morose. “He’s had a rough past, he’s permanently screwed up,” said Mesure. But Athos finds his home with the musketeers.

That theme of belonging is a strong one, and resonant with young actors, according to Sparrow-Knapp. As is the play’s other message about personal identity and authenticity.

In the opening scene, D’Artagnan’s father, played by freshman Sayre Hudson, sends the young man to Paris with his blessing and advice, including these words: “If a man insults you, turn the other cheek. If he insults you again, kill him.” That semi-comedic counsel seems to sum up the play’s prevailing ethos. But so does this deeper bit of wisdom, delivered just a few lines later: “It takes courage to be yourself, so do it.”

It’s hard to think of better advice for young people — in 17th-century France or our own place and time.