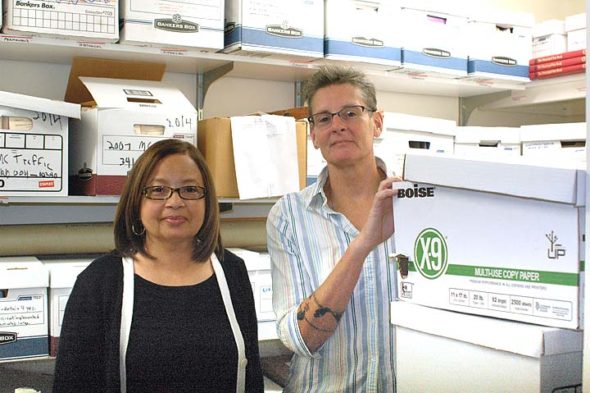 Village employees Kathy Gudgel, left, and Judy Kintner are primarily responsible for providing public access to Village government records through the Clerk of Council’s office. A recent influx of public records requests has kept things hopping. Here, they are pictured with boxes of retired records in a staff supply closet — the “seamy underbelly” of the records office, Clerk Kintner said. (Photo by Audrey Hackett)

Several recent public records requests have picked up the pace at the Clerk of Council’s office, which is responsible for maintaining Village records and fulfilling requests from the public for access to them.

Such requests ebb and flow, according to Clerk of Council Judy Kintner, who has held the position since 2010.

“Some months we deal with very few requests, other months a lot,” she said. The recent influx, relating in part to the controversy over Village Council plans to extend utilities to the 35-acre property known as the CBE on the western edge of town, has kept Kintner and her part-time assistant, Kathy Gudgel, plenty busy this fall.

“Yellow Springs has a pretty active citizenry,” Kintner said. “People know their rights.” And any time a “hot-button issue” crops up, at least a few villagers will exercise those rights by requesting public records.

Public records are just that: records held by a public office (including schools) to which members of the public are legally granted access. Examples at our local level include Village Council meeting minutes; bids, contracts and work orders for public works projects; and email and paper correspondence by Village elected officials and staff pertinent to public business.

According to Ohio law, anyone can request a public record, not just adult citizens. Journalists don’t have special rights to records, but rather the same rights as other members of the public. Access is granted thanks to the Ohio Public Records Act, first passed in 1963 as part of a new emphasis on open and transparent government.

“Some states have a residency requirement, but in Ohio you can be a foreign national, or a child, and request a record,” Kintner said. Requests can be made anonymously, and requestors don’t have to state the reason for their request.

“You can say, ‘This is Mr. Q. Please leave the meeting minutes under the elm tree.’ We’ll do it,” Kintner said.

On the other hand, identifying the reason for a request can narrow down a search, helping both Kintner’s office and the requestor to find the relevant information. And a 2011 Ohio Supreme Court ruling placed some limits on spurious requests intended not to locate records, but to seek the “forfeiture,” or fine, that public offices must pay out if a record that should legally be held is found to be destroyed.

In general, Kintner provides as much information as the law requires, and sometimes more. The key to a complex request is collaboration, she believes.

“A lot of people assume if I know what they want to find I will stop them from getting it,” she said. “There’s a level of distrust.” But in fact, she’s a neutral party, whose interest lies in helping the public access Village government records in accordance with Ohio law.
“I’m the Switzerland of the whole situation. I want to find it for you,” she said.

Sometimes the process is enjoyable; old meeting notes are written with a “flourish that’s fun to read,” Kintner said. Other times, the sheer volume of material is a challenge, as Gudgel, assistant to the Clerk since earlier this year, has discovered. The recent public records requests have consumed all of her 10 hours per week, plus some overtime, for the past month. “And I’m still not done,” she said.

Some requests are straightforward, as when a person wishes to access minutes of a specific Council meeting, or the text of a Village ordinance or resolution. Other requests are more complicated, as when a person is seeking to trace a specific issue or project that involves several Village departments over time. (Council members themselves often make records requests to prepare for discussions or votes, Kintner said.) If a request does involve other departments such as Finance or Planning and Zoning, Kintner will task staff in these departments to carry out their portion of the request, then bring together materials for the requestor’s review.

Police department records are handled separately by that department, though Kintner is notified when a request for police records comes in.

A wall of filing cabinets in Kintner’s office inside Village Council chambers holds Council meeting minutes, as well as Village ordinances and resolutions going back to 1954. Earlier records are stored in the archives of Wright State University. Together, these records form the core of the Village’s permanent records. Legally, they cannot be destroyed, as they have intrinsic historical value, according to Amanda Rindler, the local government records archivist at the Ohio History Connection, the state’s historical society.

“Records have four values: administrative, fiscal, legal and historical. We’re always interested in ones that have historical value,” she said.

Archivists at the Ohio History Connection help municipalities determine how long records should be kept. Historically significant records will be permanently preserved, while records of “more transient administrative value” can be destroyed on a schedule that the historical society approves, she said.

In Yellow Springs, for example, pool pass applications are kept for three years, as are utility billing payment stubs. Village well maintenance and field logs, on the other hand, must be stored for 50 years. A Records Commission, consisting of one citizen, Village staff and the Village solicitor, meets twice annually to determine a retention schedule for all kinds of public documents. This schedule is submitted to the Ohio History Connection for review. And a form is filed with the historical society when records, per schedule, are legally destroyed.

But meanwhile, any of these records are available for “public inspection and copying,” as the Ohio Revised Code puts it.

The law does not specify a time frame for fulfilling requests, mandating only that it be “reasonable.” As the law requires, the Village does not charge requestors for staff time, only for the cost of copying records should a person wish physical copies. Some newer records are digital, and these may be able to be emailed to the requestor.

Not all papers, and not all pixels, that circulate in Village offices are public records, however. There’s some “interpretive weirdness” that comes in, Kintner said. For example, a Council member’s “working notes” are not legally part of the public record once the work product for which those notes were created is complete. And extraneous comments in an email that do not relate to a specific project or vote can be redacted from an otherwise public record, she said.

When the going gets tough, Kintner consults with Village Solicitor Chris Conard. She also has a mantra.

“These are the people’s records,” she said. “They belong to the people of this municipality.”
And that means that making them accessible to the public, Mr. Q included, is an essential function of democratic government, she said.

Local public records requests can be made in person, by phone or by email. Requests do not need to be written, nor does the requestor need to disclose his or her identity. Contact the Clerk of Council’s office at 937-767-9126 or clerk@vil.yellowsprings.oh.us for more information.