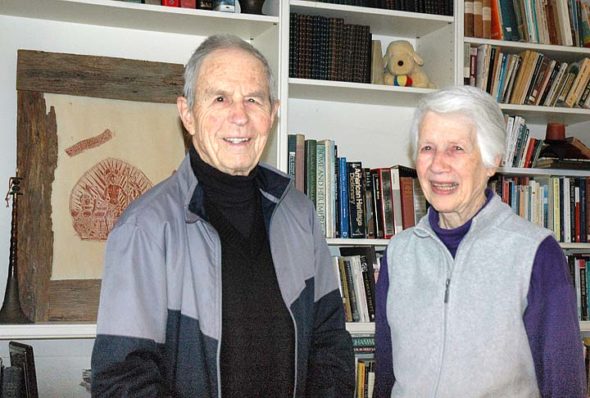 Longtime Yellow Springs residents Donna and Al Denman, a retired Antioch professor, recently started a scholarship at the college that will fund tuition and room and board for three students for the duration of their time at Antioch. The Denmans’ gift is the first in the college’s New Generations Scholarship Program. (Photo by Dylan Taylor-Lehman)

A gift to ensure college diversity

Starting in the fall of 2017, three incoming students at Antioch College will have all four years of their college experience paid for, thanks to the largesse of a Yellow Springs couple.

Al and Donna Denman, longtime residents of the village, started the Al and Donna Denman New Generations Scholarship, which will be awarded to students who may not be able to otherwise afford to go to college. The scholarship gives each student approximately $35,000 per year, which, when coupled with federal Pell grants, completely covers the students’ tuition and room and board.

The scholarship is a “staggeringly generous gift to the college,” said Susanne Hashim, the college’s vice president for advancement.

The Denmans’ gift is the first in the college’s New Generations Scholarship Program, in which alumni can contribute a minimum of $25,000 per year to sponsor a student. There is no separate application process for the scholarship, which is need-based, Hashim noted. The director of admission and the director of financial aid will work together to determine what “exciting, talented students” will be awarded the scholarship, she said, basing their decision on a combination of grades, community involvement and family need.

A characteristic of the college that Donna Denman always admired was its diverse student body, and she wanted to start the scholarship to ensure that students from many different backgrounds could attend Antioch, she said.

“We were always concerned about students not having enough money to pay for college,” Donna said. “Even with the Horace Mann Scholarship [which covered tuition for the first four incoming classes after the college reopened in 2009], students still had to pay for room and board.”

The Denmans have a long history with the village and Antioch. The couple moved here in 1965 so Al could take a job as a professor of law, philosophy and religion at the college, where he also served as the campus chaplain. He recalled that he didn’t know much about Antioch at the time, and brushed up on the job he was taking by reading a history of the college on his flight to Ohio.

The couple met in 1950 at Boston University, where Donna was getting her undergraduate degree and Al was in seminary. The two bonded over their similar Idaho backgrounds, two small-town folks in the big city, and were soon married. They moved back to Idaho, where Al worked as a chaplain and professor and Donna was active in the League of Women Voters and taught migrant workers English. They eventually moved back to Boston and then to Germany before Al took the position at Antioch.

The Denmans took up residence in a home just around the corner from the house they live in now. By that point, they had four kids in tow but realized that they had arrived at a great place to raise their children. They found that village life was intimately intertwined with that of Antioch, and they fell in love with both. All four of their children ended up attending the college.

“From the moment we opened the doors to our first house, we felt there was something unusual about Yellow Springs,” Al recalled. “We were really welcomed by the town and the college.”

The family quickly established themselves as a part of the village. Donna completed a master’s degree at Wright State and took an internship with the Greene Metropolitan Housing Authority, a group that helped low-income families find affordable, convenient places to live. The internship turned into a full-time job, which in turn led to Donna becoming the director of the program, a position she held until she retired. She was also instrumental in founding the village’s Dharma Center.

Al’s 28-year career as a professor left him “venerated among generations of Antiochians,” said Mark Reynolds, director of marketing and communications and a former president of the college’s alumni board.

“Al has a personal depth and wisdom that’s rare,” he said. “Students having access to that is a special thing.”

Living across the street from Mills Lawn, the classic sight of children playing inspired a concern for the well-being of future generations. In Yellow Springs specifically, Al said, this well-being was partly fostered by the relationship between the village and college, as the health of one contributed to the health of the other. To that end, helping more students attend Antioch is something that financially benefits the college, but also benefits the village by introducing “bright and adventuresome” students to the area, Al said.

“It was completely natural for us to ask what we can do when we heard the college needs more students,” the couple said in a press release about the scholarship.

While Antioch leaders are eager to sing the couple’s praises, the Denmans were humble about their gift and only included their name in the title of the scholarship at the college’s insistence. Moreover, university staff wanted to publicly recognize them for their contribution, but they sidestepped the honor. Instead, they requested that a forum be organized to discuss the financial challenges faced by Antioch and similar private liberal arts colleges.

As such, the “Financial Sustainability of Private Liberal Arts Education in the 21st Century” forum is planned for Friday, March 3, at 7 p.m. in McGregor Hall. Incidentally, the discussion is part of a series that Al helped found years ago, Hashim said.

Hashim added that she hopes that the Denmans’ example will continue to resonate among alumni interested in the work of the school and the students that attend Antioch. Other alumni have professed interest in creating similar scholarships as part of the New Generations Program.

“[The Denmans’ donation] will hopefully kick off the new scholarship program,” Hashim said. “We’d love for people to give some more thought to doing that.”

One Response to “A gift to ensure college diversity”