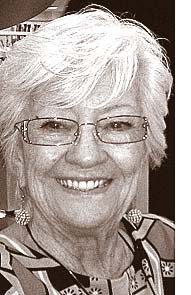 Doreen Wallace, formerly of Carterton, England, passed away peacefully at her home in Portland, Texas, on March 7, 2017. She was born September 20, 1931 — between two world wars — to Stanley and Fanny Rebecca Coles.

Doreen was raised in a family of “travelers” — otherwise known as “gypsies” — and was responsible for the dodgems (bumper cars) and the candy floss booth. During her younger years, like so many English children, she endured the Blitz on food rations behind blackout curtains. After her childhood education, she served an apprenticeship in Whitney, England, as a dressmaker.

Her home in Carterton was near Brize Norton Royal Air Force Base, where her future husband, James (Tex) Wallace, was temporarily stationed. Doreen agreed to date him, but only until she found a suitable dance partner, unlike the tall, lanky Air Force officer from Temple, Texas. Fred Astaire he was not, but within three months Doreen and Tex were engaged. Unfortunately, Tex was called back to the States, but not before a game of bingo sealed their fate. The winning call of I-27 won his card and an award of $300, which paid for Doreen’s sea passage to America. They were married in Montgomery, Ala., on May 2, 1955.

Doreen experienced culture shock at her first home in the Jim Crow South, and she was confused by people’s reactions when she sat in the back row of the “colored” section of a municipal bus. When faced with a “whites only” sign at a local “washateria,” she didn’t know where to launder her colors. She was also aghast at the number of mosquito bites she saw on people’s legs and found refuge from the oppressive heat during matinees at the city’s air-conditioned cinemas.

Her parents were traumatized by Doreen’s emigration to America. And when Jackie Bookout, an Air Force serviceman stationed in England, came calling for Doreen’s younger sister, Avril, Mrs. Coles routinely said her youngest daughter wasn’t around and closed the door in his face. But true love prevailed, and shortly thereafter Avril and Jackie married. Alas, Stan and Fanny Coles surrendered another British daughter to the Yanks.

Years later, Tex and Jackie developed a strong camaraderie while serving together overseas during the Vietnam War. During the 1968 Tet Offensive, Tex earned a Silver Star for his role in flying evacuees out of the war torn country in his C-130.

In 21 years as an Air Force wife, Doreen, her husband and two children, Mandy and Jimmy, moved 13 times before settling in Corpus Christi, Texas. She had long ago agreed to live in her husband’s home state, a suitable arrangement for Doreen who loved the sea and the incoming breezes off the Gulf of Mexico.

Doreen was never an early riser. She convinced her children that holidays didn’t begin until 9 a.m. In her later years her daughter-in-law, Cindy, made all Doreen’s appointments in the afternoon. Her son, Jim, would often call her on his lunch break to remind her “noon is the new nine.” And every night when her daughter, Mandy, called from Yellow Springs to catch up on the details of her mother’s life, Doreen always said goodnight with a sweet “Cheerio Love!” — her standard sign-off to friends and family.

Following her husband’s death in 1984, Doreen continued to live in her Flour Bluff home where she enjoyed her late mornings looking out over the Laguna Madre, sipping a cup of coffee, and reading the local newspaper.

Despite her years in America, Doreen remained strongly attached to her home country and kept up with all matters of British royalty, including Queen Elizabeth II’s Golden Jubilee.

Her most recent years were spent in Portland, Texas, near her son and daughter-in-law at the Brookdale Inn. Cindy and Jim, along with the love and humor of a caring staff, made her days at the Inn comfortable and fun.

Doreen’s family asks that in lieu of flowers, everyone who knew her should treat themselves to something special.