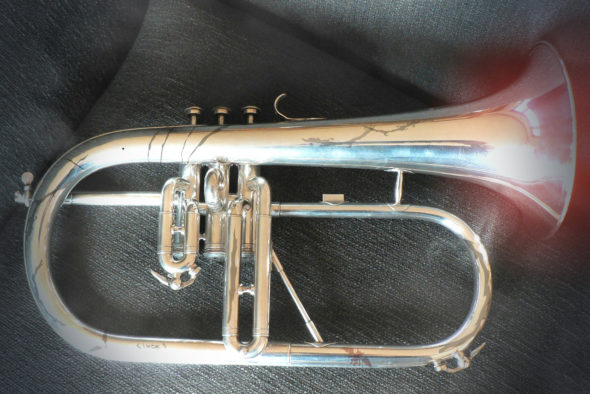 The 200-year-old flugelhorn recently found hidden in the walls of Antioch Hall.

Antioch College recently announced the discovery of a 200-year-old flugelhorn on the campus. The horn was hidden in a locked case and plastered into a wall on the second floor of Antioch Hall, where minor renovations began last month.

Melody says the contractors who found the flugelhorn called her first, since they were sure it was a musical instrument of some sort. But she also said they were initially hesitant to break the series of chains and locks that surrounded the black case in which it was nestled.

“There was something written on the case, something about not opening it or else there would be consequences, yadda yadda yadda, but I insisted that they break it open,” said Melody.

The contractors who found the flugelhorn could not be reached for comment, as their whereabouts since the major discovery are unknown.

There was also a journal found inside the case, a journal belonging to Heinrich Fluëgel, the creator of the flugelhorn, indicating that the instrument might be the first flugelhorn ever produced.

“There was a lot of weird stuff inside that journal,” said Melody. “A lot of references to Faust and the devil; the history department is still working out what it all means, but what I can tell you is that this instrument is a tremendous piece of history.”

To celebrate that history, Melody is planning the YS Flugel Fest, a series of fundraiser concerts in which all donations will benefit the restoration of the antique flugelhorn, which appears to have suffered some damage over the years.

“Somebody really did a number on this thing,” said Melody. “A lot of scratches and strange markings all over it. But if we get good attendance at Flugel Fest, I’m sure we can afford to get it working good as new, so don’t forget to come on out and hail Satan! I mean, uh, come on out and enjoy some tunes!”