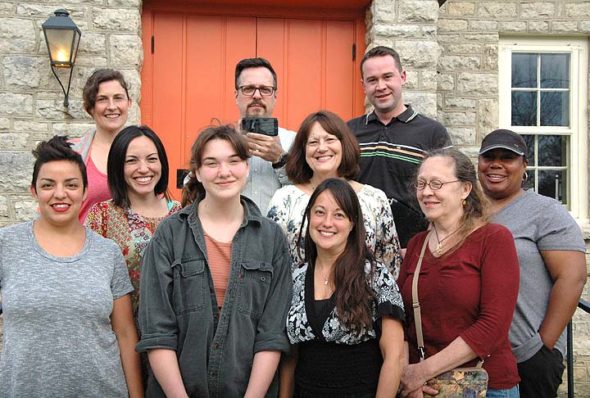 Colleges have them. Private secondary schools have them. But until recently most public schools didn’t have them — alumni associations, that is.

“A lot of public high schools don’t have alumni associations. But public schools are slowly catching on,” said Dawn Boyer, Yellow Springs schools’ director of advancement and, as it happens, an alumna herself, class of 1996.

Yellow Springs schools are catching on faster than most. The Yellow Springs Alumni Association, or YSAA, has been in the works for about three years. It’s now officially launched, with its first all-class event set for Saturday, July 1, at Yellow Springs High School. The Fourth of July weekend is typically a time when returning graduates gather for class reunions, and the YSAA hopes to piggyback on that tradition to begin pulling together an all-alumni reception at the high school, complete with school tours.

“We want to plug into reunion weekend,” explained Boyer, who also serves as an ex officio member of the YSAA board.

Why an alumni association? The idea grew out of the school district’s 2020 strategic plan, according to Evan Scott, ’83, a current member of the YSAA board who formerly served on the Yellow Springs school board. In order to support educational innovation in village schools, district leaders were tasked with finding alternative revenue sources beyond the state support and local levies that have long been the mainstays of school funding.

“State funding will keep our lights on, and Yellow Springs has a history of passing school levies,” Scott said. “But if we want to innovate, we have to take responsibility and proactively go get additional funds.”

Funds are needed in two areas in particular, according to Scott: to train district administrators and teachers in the district-wide shift to project-based learning, or PBL, and to support PBL projects that may require resources that “go outside of the normal scope.”

Several years ago, as the only alumnus on the school board, Scott asked district leaders if Yellow Springs schools had ever reached out to alumni as a group. The answer was no — and the idea of doing just that was born.

A handful of Yellow Springs alumni got together in 2014 to brainstorm. “We started dialoguing,” said John Gudgel, ’75, who has served the local schools as principal, guidance counselor and track coach. With all of these roles, he is a “go-to person” for locating alumni and reconnecting them to each other and the district.

Another early member of the group was Erika Grushon, ’97. “Evan presented the idea to me, and I found it very compelling,” she said. Born and raised in Yellow Springs, she’s now “come full circle,” with two children at Mills Lawn School, Isaac and Vivian. When Isaac was in second grade, his class became immersed, through a PBL project, in emerald ash borer research — real science that was happening in real time, with real consequences for the environment around the school.

Supporting that kind of learning for her own and other local kids is why she’s on the YSAA board, currently serving as president, with Naomi Bongorno, ’95, as vice president, and Gudgel as secretary. There are presently 13 YSAA board members, including a student representative, Marya Weigand, class of 2018.

The board has focused its early efforts on identifying the estimated 2,000 alumni that have graduated from Yellow Springs High School over the past 40 years. That work was helped by the hiring of Dawn Boyer as advancement director last summer.

“Dawn’s great. She brings so much to the table,” Scott said.

Boyer now maintains a Yellow Springs alumni database, with over 1,000 individuals currently represented. And late last year, she sent out the schools’ first-ever annual appeal to the Yellow Springs community. Over $18,000 was raised from that effort, including $4,345 from 26 local alumni and parents of alumni. That number will grow over time, Boyer said.

But while fundraising is a key piece of the YSAA’s mission, it’s not the board’s only current project. “We’re not just asking for money,” Scott explained. The group is also working to tap alumni time and talent, assets of great value to current students, the YSAA believes.

To that end, board members are working to build alumni networks across the country — even, eventually, the world — to give current students and recent graduates a leg up in their college searches and career plans. It’s called the Dog Pound Program — after the district’s Bulldog mascot — and Evan Scott and Stephen Pearson, ’83, who lives in Atlanta, hope to launch the first Dog Pound by the end of the year, in a metro area to be determined.

“I love the idea of having networks around the country,” Naomi Bongorno said. “There’s such a wealth of expertise alumni have to share.”

Other YSAA projects include establishing a scholarship fund for graduating seniors, expanding the YS Bulldogs online store and setting up booster funds for arts and athletics, according to a recent YSAA press release.

To Gudgel, all of these activities serve to pay forward the good fortune of being educated in Yellow Springs.

“It’s about giving back to the school system,” he said. “Yellow Springs schools prepared us to do great things. Why not give back to today’s schools and today’s students?”

For more information and to connect with the YSAA, visit the YS schools alumni page at ysschools.org/ysaa.aspx. All alumni, including those who attended Bryan High School, as well as parents of alumni, teachers and former teachers and parents of current students are invited to get involved.