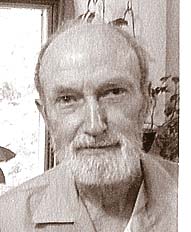 Tom was born in 1922 in Milwaukee, Wisc., the fourth of seven children born to Sidney Archibald and Mary Wanostracht Chater Gibbs Holyoke. He was an Eagle Scout and valedictorian of his high school class and attended Harvard College on a full scholarship. There he lettered in track as a long jumper. He graduated from Harvard in three years with a Bachelor of Arts Magna Cum Laude in mechanical engineering. He worked for Curtis Aircraft in Columbus, Ohio, before joining the U. S. Navy in 1944. After the war he returned to Columbus, where he earned a Ph.D. in mathematics at Ohio State University, discovered a love of teaching and met his future wife, Evadene Garber, over a couple of tennis rackets.

During the next several years he was an assistant professor at Northwestern and Miami universities, followed by a year studying physics at UC Berkeley on an NSF fellowship.

He and his family, now including three children, moved to Yellow Springs in 1958, where he joined the mathematics department of Antioch College, eventually being named full professor, Science Institute director and associate dean of faculty. He retired from Antioch in 1985.

During his career he spent seven years teaching abroad, with Fulbright lecturing grants at Mindanao State University, Philippines; Chancellor College, Malawi; and the University of Botswana; and he was team leader of a Ford Foundation Science Education Improvement Project at Mindanao State.

He was an active member of the Yellow Springs community, serving on Village Council and the boards of the Credit Union, Community Council, the Senior Center and the ACLU. He volunteered for many years at the Book Loft of Friends of Planned Parenthood. He was the book review editor of the Antioch Review.

Tom was a dedicated, life-long bicyclist. He was an avid pool, tennis and ping pong player, sometimes playing left-handed against weaker opponents or when his elbow was hurting. He was a keen bridge player at the Life Master level, notably with partners Ilse Tebbetts, Anita Kohler, Harry Khamis, Ralph Welton and locally with son Andy. At the local game, two separate bidding guidelines were referred to as “Holyoke’s First Law.” He was an unquenchable punner, a limerick writer, a dedicated reader and the possessor of a prodigious library. Milwaukee’s Best Ice was his favorite beer.

After Evadene’s death, when he was in his late eighties, he married his high school sweetheart, Ruth Fanning Drummer. They were famous for their prompt 5 p.m. arrival at the Winds on Tuesday nights.

A memorial gathering will be held on Sunday, June 4 at 2:30 p.m. at the Unitarian Universalist Fellowship in Goes.