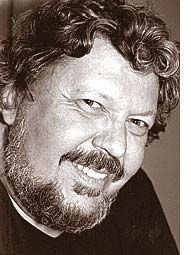 Tom Teepen, retired Cox columnist and editorial page editor of The Atlanta Constitution, died Sunday morning. He was 82. His wife of more than 30 years, Sandy Teepen, had just gone home after visiting Tom at Hospice Atlanta, where he had been since Friday. Sandy played Al Jarreau, Sun Ra and the bluegrass records that she and Tom collected over the years. She listened to the music of string quartets on Saturday, “trying to put it all in my head,” she said.

Her husband had been battling various illnesses since a kidney transplant 10 years ago and had been in emergency rooms at Crawford-Long, Grady and Piedmont hospitals several times over the last year. About six weeks ago, Tom lost the ability to communicate with his family. Sandy said his death brings a sense of peace and closure. In addition to his wife, Tom leaves behind daughter Kris Teepen-Garcia; son Jeremy Teepen; stepdaughter Jennifer Koerlin-Fearn; eight grandchildren and one great-grandchild.

Tom and Sandy were each other’s second spouses, and when the couple married, Tom’s son wisely noted that they became “a family of spare parts.” Tom loved his work, and Sandy said Tom’s mother once told her that Tom wanted to be a newspaper man as young as age 7.

“He used to write stories on paper and hand them out to people,” Sandy said she was told.

Joe Geshwiler, retired Constitution editorial writer, said Tom was the most effortless writer he had met in half a century, writing frequent columns and nearly one editorial every day — and making it look easy. Geshwiler said that when Tom’s 10-year-old granddaughter expressed an interest in one of his passions, jazz, he composed a column to introduce her to the giants of the genre: “As an example of Tom’s way with words, he noted that Coleman Hawkins’ rendition of ‘Body and Soul’ proves ‘that poetry can be written as well by a tenor saxophone as a pen.’”

Tom earned his bachelor’s degree in journalism from Ohio University and started his career with the Dayton Daily News in 1958. He also completed a John S. Knight Journalism Fellowship at Stanford University in 1967, focusing on African studies. The couple moved to Atlanta in 1983, when he started as an editorial page editor for The Constitution.

“We fell in love with the city and consider ourselves Atlantans,” Sandy said.

She remembers Tom as “an avid reader who loved history, jazz, art galleries and going out.” Sandy said the only thing Tom didn’t love was dancing, and while she did like to dance, she wouldn’t do so without Tom. In his columns and editorials, Tom urged support for public education, civil and abortion rights, sustainable energy policies and economic game plans that gave more U.S. families a share of the American dream. Conversely, he opposed capital punishment, global-warming denial and weapons proliferation in America and abroad. Plus, he took delight in skewering politicians who wrapped themselves in the Stars and Stripes or a mantle of religiosity. Marilyn Geewax, a former Constitution columnist and editorial writer who is now a National Public Radio business analyst living in Washington, called Tom a hero.

“I always thought of him as a Renaissance beatnik,” Geewax said. “He loved jazz and poetry and freedom and art. He was brilliant and passionate and kind.”

Atlanta Journal-Constitution columnist Jay Bookman said he learned from Tom that “an opinion writer could be both rational and passionate, but when forced to choose between them, always stick with rational.” Bookman believed Tom fought hard and well for what he believed in, but always did it with a good heart.

The family plans to host a gathering for family and friends in about six weeks at an Atlanta location to be determined.