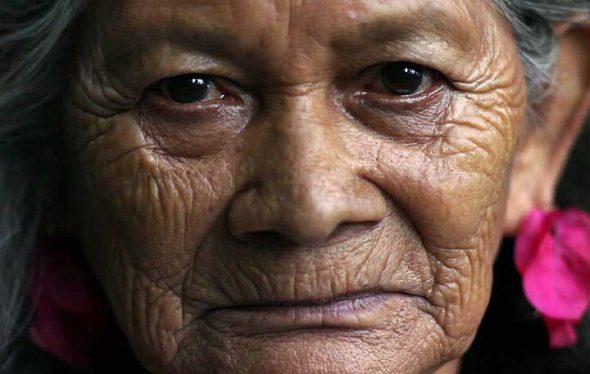 Antioch media studies professor Charles Fairbanks and co-director Saul Kakwill show their documentary “The Modern Jungle” at the Little Art Theatre on Saturday, April 29. The documentary explores what happens to a Zoque shaman named Don Juan when he finds himself drawn into a pyramid scheme involving the sale of nutritional supplements. The film is partly in the Zoque language, a language from southernmost Mexico. (Submitted photo)

Film highlights the life of a Zoque shaman

This weekend, Yellow Springers have the opportunity to see not only a feature-length documentary made by a fellow villager, but a documentary filmed in Zoque, a language that to date has only been featured in three films.

Antioch media studies professor, filmmaker and Yellow Springs resident Charles Fairbanks teamed up with Mexican filmmaker Saul Kak to create “The Modern Jungle,” a documentary that chronicles the life of a Zoque shaman named Don Juan. Zoque is an indigenous Mexican language spoken in Chiapas, a state in southernmost Mexico, and the documentary uses the lives of the Zoque people as its backdrop, exploring what happens to Don Juan when he finds himself drawn into a pyramid scheme involving the sale of nutritional supplements.

Villagers can see “The Modern Jungle” at the Little Art Theatre on Saturday, April 29, where it will show for free. The film starts at 11 a.m. and is in Spanish and Zoque with English subtitles. Both Fairbanks and Kak will be on hand to discuss the film following its village premiere.

In addition to telling a fascinating human-interest story, the film explores weighty sociological concepts, according to Fairbanks.

“This film shows the psychological effects of commodity fetish better than many films I’ve seen,” he said in a recent interview. The nutritional supplement scheme and its effects on Don Juan demonstrate the “machinations of capitalism and the marketing of industrial products.”

Fairbanks said the film also takes a meta look at documentary filmmaking, as the film shows Don Juan interacting with the filmmakers. Fairbanks cautioned Don Juan against getting involved with the pyramid scheme, but with a hernia and lured by the promise of hefty returns on his investment, Don Juan invites them to help him. What are the roles of observers when they are invited in to their subjects’ lives? Fairbanks asked. What are the roles of the privileged observers?

“The documentary puts on the table the unsavory aspects of making a documentary,” he said. “Coming from Yellow Springs and the USA, we are comparatively wealthy, and the negotiations around filming take this into consideration.”

Fairbanks began making “Jungle” six years ago, when he was teaching at the University of Chiapas. Kak was one of his students and approached him with a script for a feature film. Kak had never made a movie before but Fairbanks was “captivated” by Kak’s ideas, and the two began working on the project. Fairbanks said they made some headway in filming some “strong scenes,” but they found they couldn’t make the film work. Taking a different approach, they decided to explore ideas similar to those in Kak’s script, but this time in documentary format.

Soon, they happened upon Don Juan and were caught up in his story. More generally, Kak was interested in traditional practices of the Zoque. Kak holds Zoque culture in high esteem, and wanted to show it in positive ways. The film was a project that was personal to him, Fairbanks said, as Kak told him that an interest in Zoque culture was not fashionable among the people his age.

A critical part of the film is that much of it is in the Zoque language, Fairbanks said. Zoque is an indigenous language with approximately 60,000 native speakers in and around the state of Chiapas; numerous dialects make the exact number uncertain. The language was likely spoken by the Olmecs, one of the first major civilizations in what would later become Mexico, as early as 3,600 years ago. Aside from “Jungle,” two films made in the 1980s are the only other films made in the language, Fairbanks said. As a personal bonus, Fairbanks, who was already fluent in Spanish, now knows a little bit of Zoque thanks to his experience making the film.

In order to make “Jungle,” Fairbanks said he has travelled to Chiapas from Yellow Springs “two to three times per year” since 2012. He was also working on a number of his own projects all the while, including “The Elephant in Our Room,” a documentary about the Republican National Convention he made with his media studies class last year.

In fact, Fairbanks was conducting the interview for this article from Columbia, S.C., where he was showing not only “Jungle” but a shortened version of “Elephant” at the Indy Grits Film Festival. The entire eight-person crew responsible for “Seriously Not Funny” (the name of the shortened version of the documentary shown at Indy Grits) traveled to the festival with Fairbanks. There they completed the journey from students to documentarians to auteurs celebrated for their work, as “Seriously Not Funny” won the award for “Best Student Film” at the festival. (The film also showed at Indie Goods Film Festival in Athens, Ohio.)

The fact that Fairbanks had two films included in the festival was no small feat. “Festivals are never a sure bet,” he explained, as “films are rejected more than they’re accepted.” Festivals tend to accept around 100 features but may get between 1,000 and 8,000 entries.

But by this point, Fairbanks is used to the festival circuit. “The Modern Jungle” has played in film festivals all over the USA and the world, including a screening at the Film Society of Lincoln Center, in New York, and in Tehran, Switzerland and Poland. The film was also shown across Mexico and in Chiapas, an experience that Fairbanks called especially gratifying.

The festival award was gratifying, Fairbanks said, but he said he was touched by the ways in which his students were able to connect with the people in their film. A similar sentiment made working with Kak and Don Juan and his wife Carmen especially moving.

“The film shows the rhythms of their lives,” Fairbanks said with some solemnity, “and documents their struggles.”

For more information about “The Modern Jungle” and a preview of the film, visit themodernjungle.net.