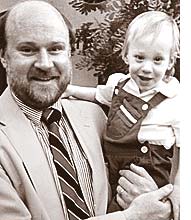 Scott Alan Warren was born on February 3, 1952, to Cal and Merlene Warren at Scott Air Force Base in Lebanon, Ill. As his father was a career Air Force officer, Scott and his three siblings had an adventure-filled childhood, living in a variety of locales across the United States and Europe, including Great Falls, Mont.; Long Island, N.Y.; and McLean and Manassas, Va. A three-year stay in Germany jump started his life-long interest in German language and culture. Scott was a scholarship student at the University of Virginia, where he became the protégé of the internationally known political theorist Dante Germino. He was awarded his B.A. with high distinction, having a double major in government and international relations from his beloved UVA in 1973 and was also a member of Phi Beta Kappa. He then received a full scholarship and teaching fellowship to Claremont Graduate School (now Claremont Graduate University) where he was awarded his M.A. and Ph.D. in government. During this time, while spending summers in Alaska, he met and married his wife Kay.

A gifted teacher, Scott held faculty positions at Occidental College, the Otis Art Institute and the University of Colorado before he was appointed Dean of Freshmen at Pomona College, where he continued to teach undergraduate courses in political theory and philosophy, as well as graduate courses in the same subjects at the Claremont Graduate School. He became part of a nationally-recognized student affairs team that emphasized the academic importance of the college experience. During this time, his book “The Emergence of Dialectical Theory: Philosophy and Political Inquiry” was published by the University of Chicago Press, and he produced numerous scholarly articles that focused on political theory and its importance as a tool for political and intellectual liberation. He ultimately served as acting vice president for student affairs at Pomona before he became dean of students and vice president for student affairs at Denison University, where he took on the challenge of the reform of Denison’s entrenched fraternity system for four long years.

Needless to say, when Antioch College offered him the position of dean of students and then associate professor of political science and philosophy, he jumped at the chance, as Antioch and its history of educational innovation had long been a model for him. In his years at Antioch, he was known as a tireless advocate for students, a buoyant optimist, inspirational teacher and empathetic advisor. The college students and community leaned heavily on Scott as the school was experiencing troubles, and he publicly led, privately advised, and mentored many young people. By the time Antioch University was ready to shutter the college’s doors, Scott had more advisees than any other faculty member and was the sole full-time philosophy faculty member. After the closure of the college, he was fully dedicated to the mission of the Non-Stop Liberal Arts Institute and later became a Morgan Fellow, one of five former faculty members who created a new curriculum for the independent college.

Regretfully, Scott, like the other Morgan Fellows and many other faculty, was not hired to teach when the college re-opened. Wilmington College then invited Scott to be a visiting lecturer in humanities and an advisor for at-risk students for three years until students demanded to have him named the director of the Philosophy Individualized M.A. Program at Antioch University Midwest, a position he held until the program was recently eliminated. Despite the challenges of his last illness, Scott found great joy in the village of Yellow Springs, and loved to do daily errands and chat with all he met.

After a long and brave confrontation with esophageal cancer, Scott died peacefully in his sleep on April 8. He had excellent and compassionate medical care-givers, and his last days were marked by a stream of visitors. He remained gracious and optimistic to the end. He is survived by his wife Kay Koeninger and son David Alan Warren, of Yellow Springs; his brother Mark Warren of Sequim, Wash.; sisters Lynn Warren Leathers, of Somerset, Ky.; Karen Warren Laughlin, of Fountain Hills, Ariz.; and numerous nieces and nephews. A celebration of his life will take place at Christ Episcopal Church in Springfield, Ohio, on Saturday, May 20, at 2 p.m., with a reception to follow at the church. Donations in his name may be sent to either the American Civil Liberties Union or the Esophageal Cancer Research Fund at the James Cancer Center at Ohio State University.

One Response to “Scott Warren”