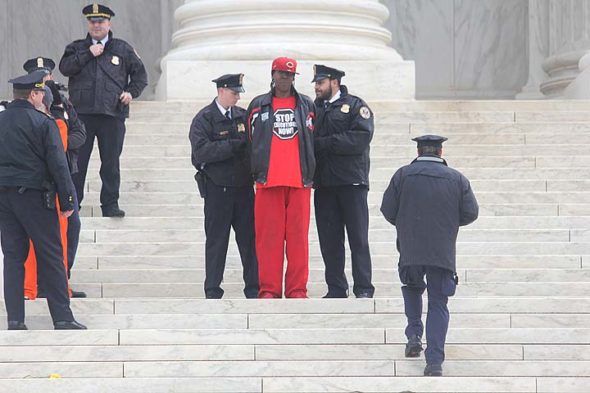 Derrick Jamison, an exonerated former Ohio death row prisoner, is shown being arrested in January of this year during a protest of the death penalty in front of the U.S. Supreme Court. Jamison will be a speaker this Saturday, May 5, at 5 p.m. at 400 Enon Road, at an event sponsored by Ohioans to Stop Executions. (submitted photo courtesy of Abolitionist Action Committee)

Derrick Jamison of Middletown was sentenced to death in October, 1985, charged with the murder of a Cincinnati bartender killed during a robbery. Police had arrested Jamison following a later robbery and discovered his shoe prints matched those found at the murder site. A man charged with acting as an accomplice to the murder fingered Jamison as the killer, then was rewarded with a reduced sentence for his testimony. Yet an eyewitness to the murder failed to put Jamison — who is unusually tall — at the murder site, evidence later found to have been suppressed by the Hamilton County prosecutor.

After serving 20 years in prison, and 17 on death row, enduring six stays of executions and coming to within 90 minutes of his execution, Jamison in 2005 was exonerated for the murder. And this Saturday, May 6, he will be one of several exonerated former death row prisoners to speak at an open house organized by Ohioans to Stop Executions.

“What I experienced on death row, what I saw my friends experience, I don’t want others to have to live through that,” Jamison said this week in a phone interview. “I know the pain and the heartache.”

The event takes place at 400 N. Enon Road just west of Yellow Springs, the home of Dayton defense attorney Jon Paul Rion. All are welcome to the event, and donations are encouraged. A preview of a documentary on the death penalty will be shown, and current legislative highlights presented. RSVP to eschutz@otse.org.

Most promising of current legislation is a bill in the Ohio legislature that would exclude those with serious mental illnesses — such as schizophrenia, bipolar disorder and major depressive disorder — from being sentenced to death.

“This is a reform that we’re optimistic we can get done in 2017,” said Kevin Werner, executive director of Ohioans to Stop Executions, in a phone interview last week. “We want to share what people can do to make this a reality.”

Rion, on the board of Ohioans to Stop Executions, is hosting the open house because he feels strongly that the death penalty is both misguided and wrong.

“I’m clearly against the death penalty for both practical and philosophical reasons,” he said in an interview last week.

As a defense attorney for more than 20 years, Rion has seen compelling evidence for opposing the death penalty on practical reasons alone. First, a guilty conviction often reflects the skills of both the competing attorneys more than the actual guilt of the defendent, he said.

“In trying cases, it becomes evident that the skill of the lawyers involved is incredibly relevant to the outcome of the case,” he said. “It’s unfair that the life of someone depends on the skills of the defense and prosecuting attorneys.”

And data also indicates that race is a factor, with black defendents proportionately more likely than whites to receive death sentences. While there’s no evidence that the bias toward sentencing black defendents is conscious, it is nonetheless statistically real, according to Rion.

“From a practical point of view, it’s difficult to support a policy where these biases can’t be removed,” he said.

And finally, the death penalty is expensive, costing about $800,000 more per defendent than life in prison due to extensive and years-long legal costs. Currently, there are 157 people on death row in Ohio, according to Rion.

“That’s an awful lot of tax dollars going to a small group of people,” he said.

Perhaps most importantly, the mood of the country is shifting around the death penalty issue, according to Rion.

“It’s a crucial time in this country for the death penalty,” he said. “People are questioning it in many ways and courts are re-evaluating whether due process is achievable.”

In Ohio, the Sixth Court of Appeals in Cincinnati is scheduled to rehear its previous decision, made last month, that upheld the January decision of a Dayton U.S. Magistrate that put on hold the state’s plan to execute eight prisoners. The hearing will take place June 14. In the January hearing, U.S. Magistrate Michael Merz ruled that the use of the drug midazolam in a three-drug protocol planned for use in executions made a tortuous death likely, and thus the executions could not proceed. The state has not executed death row prisoners since January 2014, when witnesses described the 26-minute struggle of Dennis McGuire before his death, in which midazolam was used.

“We all recognize that was a botched execution,” Werner said last week. Since 2014, Ohio hasn’t found a way to resume executions, although the state has continued to try to do so. But as the public has become more aware that a death sentence is far more costly and complicated than life without parole, juries have turned away from the death sentence, he said.

And there’s growing awareness that sometimes the wrong person is killed. Since the death sentence was reinstated by the Supreme Court in 1977, 157 death row prisoners nationwide have been exonerated of the charges, with charges dismissed due to new DNA or other evidence. In Ohio since 1975, nine prisoners have been exonerated after receiving a sentence of death.

“It’s unquestionable that during this time the state has executed an innocent person,” Werner said.
Jamison, the exonerated former death row prisoner, agrees with Werner.

“I know innocent people have died,” he said, noting the 157 exonerated former prisoners. “That’s 157 mistakes that were made.”

But most important of all, the death penalty is just plain wrong, according to local retired physician Carl Hyde.

“The idea that you should execute someone because that person has killed someone is based on revenge, and revenge is not a constructive way to deal with human beings,” Hyde said, stating that both his training as a physician and his beliefs as a Quaker have brought him to his strong opposition to the death penalty. Hyde has traveled to Lucasville, Ohio, about 20 times since the state reinstated the death penalty in 1999, to serve as a witness to an execution. Doing so, he said, is a “leading” he feels from God, to bear witness to something he feels is wrong.

No other Western nation has a death penalty, and in the world, the countries that execute the most citizens are China, Iran, Pakistan, Saudi Arabia and the United States, in that order, according to Amnesty International.

But some death penalty opponents believe the time is right for this country, or at least this state, to put an end to punishing its citizens with death.

“Things are changing very quickly regarding the death penalty,” Rion said. “The courts and society are asking the foundational questions.”

For more information on efforts to halt the death penalty in Ohio, go online to Ohioans to Stop Executions at otse.org.